Whatever It Is, It's Weird And Pissed Off 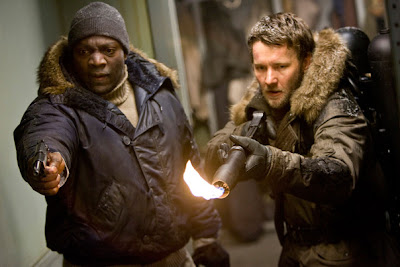 With today's release of the red band trailer for Universal's prequel to The Thing, I think we've seen enough of the movie to say with some confidence that this will be a lunkheaded version of Carpenter's 1982 film.

That said, I'm still stubbornly looking forward to this movie. No, it won't be the movie I was optimistically hoping it would be back when information first started leaking out about it but I know from this trailer that The Thing will be a full-on monster movie and man, I'll take it. After the debacle of Creature - a movie that couldn't even get the simple thrills of a guy-in-a-suit swamp monster movie right - and Super 8, which had a huge budget but not a decent creature to show for it, I'm ready for any monster movie that can at least come through on the most basic level.

It might not manage anything more than that, but that's fine - I'll keep my expectations low. I'm not even that irate about the CGI. It is what it is. And unlike the CGI in the recent Fright Night remake, this looks like it was rendered by people who knew what they were doing. Yes, it'd be nice if this prequel was as moody and well-played as Carpenter's but failing that, I'll settle for a movie that keeps its alien menace weird and pissed off.

Email ThisBlogThis!Share to TwitterShare to FacebookShare to Pinterest
Labels: The Thing (2011)

Agreed. I think it will help to go into this film with very low expectations so that if it doesn't completely suck it will come as a complete and pleasant surprise.

That's probably a good approach to most movies but this one especially. There's a lot to be leery of here but I'll just be hoping for an entertaining monster mash.

I just watched the Carpenter version yesterday for the 1st time in about 25 years. I liked it much better than I did as a teenager. Luckily I have you to pay good money to see this rehash and then let me know if it's worth a tin shit.

You can count on it!

I love the Carpenter movie and the Classic The Thing is a must see. I was hoping to se a sequel opposed to a prequel. A prequel is too easy. The plot has been laid out for you, now just fill in the blanks and the characters. This movie will need to be innovative and give us answers we didn't get in the Carpenter film. It has big shoes to fill and I hope we at least get a snug fit.

I'm not sure how easy a prequel is because everything has to line up with what we know from Carpenter's film. I think that's more difficult to pull off than some might assume. As for a sequel, I've never been interested. One of the most memorable aspects of Carpenter's film was its ambigious conclusion - anything that would continue off of that final, uncertain note couldn't help but diminish it. I doubt that the prequel will be a classic in its own right but I'm curious to see how it plays out.

I like your comment about sequels. That's actually part of what I like about all 3 of (what I consider, and I'm assuming most agree on) Carpenter's best horror movies, The Fog, The Thing, and Halloween. They all let you think the movies done, but then throw one last curveball at you.
As for this prequel, I was looking forward to it, but I'm not sure after watching this. I will still watch it, but I typically hate CGI. It just always looks so out of place to me. But anyway, the first one for me isn't about the effects as much as it was that feeling of emptiness and paranoia. Guess we'll see in a couple months.

I do not understand this at all... why would people give up their hard-earned cash to willingly see something they KNOW AHEAD OF TIME is a weak retread of material that has already been done RIGHT.

This "requel" (remake/prequel) - or 'reekquel' looks to be a paint-by-numbers rehash of Carpenter's THE THING - the only difference is that it adds 2 females to the cast and CGI.

Do yourselves a favor and just pop in the DVD or Blu-Ray of the Carpenter film.

That's probably good advice, L. Ron, but I do like to check out every new genre film in the theaters, whenever possible. And while I don't expect this movie to rival Carpenter's, I do think it looks like a fun monster movie with some gooey, grotesque FX.

I really hate all these naysayers saying that its just a rehash, I wish I could reach across the internet with a lead pipe and crack some skulls!