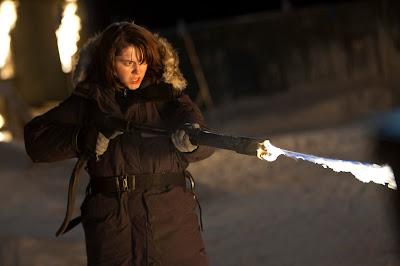 I was all prepared to love - or at least like - the hell out of the new Thing. Unlike a lot of genre fans, I happily support big budget Hollywood horror. It might not always produce the best results but I always enjoy seeing big money thrown at horror projects. If you can make a kick-ass horror movie with a bunch of no-name actors in a farmhouse or a cabin in the woods, great. But I also like to see bigger scale horror projects realized with state-of-the-art craftsmanship. Movies like The Birds (1963), The Exorcist (1973), The Omen (1976), The Shining (1980) and, well, John Carpenter's The Thing (1982) weren't done on the cheap. It took Hollywood's deep pockets to make them happen. So whenever major studios decide that they want to pony up for a horror project, I'm game to see how it turns out.

And sequels, prequels, remakes, reboots - fans generally hate them but I'm mostly all for them. When they're bad, they don't spoil the originals for me. Given my level-headed attitude, I was certain that The Thing (2011) would score a passing mark from me. I even scoffed at some of the early reviews that panned it for a lack of character development and an over-reliance on FX. I mean, come on. Anyone who knows anything about Carpenter's Thing knows that those were the exact same criticisms that were levelled against that classic. So I wasn't about to be that guy and say the same shit about this movie.

Except, now having seen The Thing '11, I kind of have to say them.

As reported, the characterizations are dead on arrival and the FX are both overused and under realized. Even if I didn't know Carpenter's film chapter and verse, this movie still wouldn't play well in my eyes.

It's a shame, too, because it starts off so well. The first half had me hooked. It wasn't headed for a four-star rating but it was, at least, solid. So much so that I was even willing to overlook the curious fact that it starts off with an old-school version of the Universal logo but the wrong old-school version. You'd think they would have pulled out the early '80s Uni logo - like the one that ran in front of Sam Raimi's Drag Me To Hell (2009) - but instead it's the logo from the early '90s.

Pretty much this one:

Now, I do like that logo - it's attached to some of my favorites, like, um, Dr. Giggles (1992). But it's an odd choice to put on this Thing. Who knows - maybe Universal is just dusting off that old logo for all their movies these days. If so, I hadn't noticed.

Anyhow, a much bigger issue than an oddly chosen studio logo becomes apparent early on in this new Thing: they fuck up the alien spaceship. I mean, everybody who's seen Carpenter's film remembers how the alien spaceship was originally found by the members of Outpost 31 - in an giant open crater, having been revealed by the Norwegians after being buried for God knows how long.

When the men of Outpost 31 watch the video footage of the Norwegians standing in a circle around the buried alien ship, that was Carpenter's nod to the discovery scene in Howard Hawk's 1951 The Thing From Another World (even down to the footage being in black and white). On the video, we see the Norwegians set off their nitrate explosives and later, when MacReady, Norris, and Doc Copper fly out to investigate the site, they stand at the edge of the crater and look down on the exposed ship. 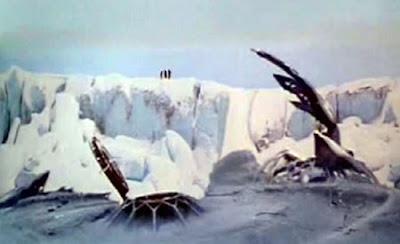 The Thing '11 doesn't bother to match any of this up. At all. In fact it flat-out contradicts it. Kind of a giant fuck-up, if you ask me.

There's no scene of the Norwegian crew standing in a circle to measure the circumference on the saucer, much less anyone videotaping it. There's no setting of explosions to get past the ice to the ship. Instead, they enter through cracks in the ice to find the ship underground. 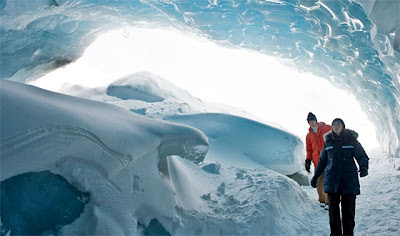 When a huge selling point from the makers of this film to the fans of Carpenter's film was that this was going to put the pieces of the puzzle together and be a seamless match with the '82 version, well, this is the kind of sloppiness that you just can't forgive. It makes the fact that they take pains to explain the backstory behind such lesser incidents as the the axe embedded in a door that much worse. You know...making sure that the discovery of the spaceship wasn't entirely different in this film from what Carpenter showed probably should've merited more attention. I'm just sayin'.

But even with that colossal gaffe in place, I was still willing to enjoy this Thing as long as the story was involving and the monster action was cool. But on both counts, it comes up short. I bet the original version of the Thing screenplay, by Battlestar Galactica scribe Ronald D. Moore, was pretty good. But the version that director Matthijs van Heijningen Jr. ended up working with - a rewrite by Eric Heisserer (Final Destination 5) - is definitely not so hot. I like the actors - especially Mary Elizabeth Winstead and Joel Edgerton - but there's only so much they can do to bring their characters to life. And the monster action...well, it's better than anything in this year's Super 8 or Creature, at least, so I'll give it some credit. But what FX artists Alec Gillis and Tom Woodruff, Jr. of Amalgamated Dynamics came up with is ultimately kind of piss poor. With all the advance talk of the film's FX being largely practical and the finished product showing almost no practical FX work, it leads me to think that plans went awry at some point.

I'm not a hater when it comes to CGI but when it's bad, it ought to be called out as such and - outside of a couple of nicely hideous moments - it's pretty bad here. It's not Fright Night bad but it's still not good. Or maybe it'd be more accurate to say that it's badly used. When we see the Thing in full-body action scuttling down hallways after victims, it just looks goofy. Maybe you could objectively study the animation and say that it was a competent job but it's not good for the movie. For the '82 film, Carpenter had a climatic scene of the "Blair-Monster" version of the Thing in action created via stop-motion - by animator Randy Cook - but cut it because it just didn't fit the film. That showed judgment on Carpenter's part. He knew what looked right for his film. Heijningen Jr. - like too many modern directors - doesn't have a clue when it comes to that.

I won't go on and on about how bad this movie is because it isn't terrible so much as it is mediocre. I didn't go in it expecting it to be great but it drops the ball in too many key areas for me to give a favorable nod. Funnily enough, watching this try and fail to successfully imitate Carpenter's film didn't immediate put in the mind to rewatch Carpenter's classic but rather 1989's underwater alien tale Leviathan. That cheeseball Thing rip-off is much more my cup of tea than The Thing 2011. The cast for that - Peter Weller, Daniel Stern, Richard Crenna, Ernie Hudson, Hector Elizondo, Amanda Pays, Meg Foster - has personality to spare and the old-school practical effects by Stan Winston (who famously lent a helping hand to Rob Bottin on The Thing) remain vividly gruesome. That's as much as I wanted out of The Thing '11.

When you set the bar so low (no offense, Leviathan) that a movie can't possibly fail to meet expectations but it does anyway - well, all you can do is sigh and move on. A satisfying prequel to Carpenter's paranoid classic? Eh, looks like some Things just aren't meant to be.
Posted by Jeff Allard at 6:51 PM

Email ThisBlogThis!Share to TwitterShare to FacebookShare to Pinterest
Labels: The Thing (1982), The Thing (2011)

The moral is, "NEVER trust what bullshit producers throw at you."

ESPECIALLY if they're producers of remakes...

Looked like shit and is is shit! As for your constant put down of the Super 8 monster, at least it was only used at the end for just a few minutes otherwise they hide it for most of the film. But that was an actually well made movie, unlike this one.

L. Ron, the moral for me is the same as always - don't trust anything until you see the movie for yourself. You never know how you're going to feel about a movie - whether it be good or bad - until you've watched it.

If I stayed away from all remakes because I assumed they would suck, I'd be missing some movies that I love, like the DAWN OF THE DEAD remake. For the occasional gem, I'm willing to endure my fair share of disappointments.

Mummbles, as much as this was a letdown, I'd still take it any day over Super 8. The worst CG monster shot in this is still better than anything in Super 8.

And I should say that across the aisle from me is my pal Unkle Lancifer, from the esteemed blog Kindertrauma, who found THE THING '11 to be perfectly enjoyable.

This is a bummer but hardly surprising, I suppose. I can only imagine the behind-the-scenes tinkering that resulted in the final product that we have now, which is the problem when you don't have someone at the helm with a clear vision. I think this is why I'm always surprised when a remake/prequel/whatever is actually good, like say THE CRAZIES. At least with the original there was some room for improvement but with Carpenter's THE THING, it is so great that it really doesn't need this useless prequel. I like to fill in the blanks, that Carpenter and Lancaster tantalizing created in their version, on my own. Oh well. I guess I will give this new THING a go on DVD or Netflix.

I was never going to be the guy camping out for first place in line on opening day... but I'm sure I'll see it eventually.
For whatever reason, that shot of the woman with the flamethrower is turning me off more than any threat of bad CGI.

I enjoyed this new Thing movie, I mean I was expecting something truly atrocious yet got a decent film that connects to Carpenters. Of course the fx work will never match up to Bottin's and Winstons.

By the way, I just wrote an article comparing both Things, Carpenter's and the new one, you might like it.

I guess most people agree, it's not a BAD BAD film, but it isnt as great as Carpenters.