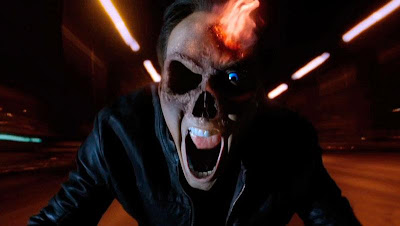 Despite the critical slagging it got, the first Ghost Rider film wasn't all the way awful - at least not in my book. I liked the fact that it was almost slanted as a macabre kid's film. Sure, GR is a guy with a flaming skull for a head but that scary imagery aside, director and screenwriter Mark Steven Johnson gave his Ghost Rider movie a benign soul and a surplus of cornball one-liners. It was a silly, sweet natured film (Johnny Blaze's most prominent vice was a love of jelly beans) that just never, if you pardon the expression, caught on fire.

This reboot from the directing duo of Neveldine/Taylor (previously responsible for the Crank films) isn't nearly the same kind of softball effort. It's still PG-13 but it's an aggressive PG-13 that rides right on the border of being an R. The script, credited to Scott Gimple, Seth Hoffman, and David Goyer (assumedly some remnants of Goyer's old script from back when he and Blade director Stephen Norrington were working on a GR film are present in this version) is bare bones and just seems to have been used as a basic guideline by Neveldine and Taylor to get from one action scene to another. And I'd be surprised if Nicholas Cage was given any scripted dialogue because damn near everything that comes out of his mouth here sounds improvised.

This movie got some scorchingly negative word of mouth last December coming out of the Butt-Numb-Athon in Austin, TX, but maybe being screened amid a clutter of other (and, frankly, probably better) films wasn't an ideal showcase for it because this has "geek favorite" written all over it. It isn't in the upper echelon of comic book adaptations, like X: Men: First Class - instead it's a much scrappier, looser piece of work but taken on its own terms it's a lot of fun. Even though ex-stunt biker Johnny Blaze's vehicle of choice is a motorcycle, this movie is like some pimped-out jalopy - moving at improbable speeds, threatening to explode at any moment.

Neveldine and Taylor are famous for their death-defying shooting methods and Spirit of Vengeance is full of shots accomplished by means not to be duplicated at home. Their chaotic style isn't the most ideal fit for 3-D but I was surprised to find that it wasn't nearly as jarring as I expected. I still suspect that 2-D would be the better option in this case but I wasn't put off by the 3-D presentation.

Encoring as Johnny Blaze/Ghost Rider, Nicholas Cage really tears into his dual role this time around. In the first film, the actor's natural eccentricity gave a welcome bit of color to an otherwise dull character but his performance here is destined to be legendary within the Cult of Cage. Given a second chance to bring this character to life, Cage doesn't hold a single quirky impulse back. He also really tears into the Jekyll/Hyde nature of Blaze and some of the film's best moments involve Blaze trying to keep the demon inside him from bursting free. 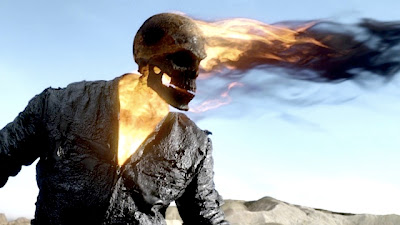 Not only is Cage playing Blaze again but he's also playing the Ghost Rider himself. In the first film, GR was a strictly CG creation but here it's Cage who is providing the movements for GR and it really makes a difference. If nothing else, this GR would've looked better to begin with because Neveldine and Taylor and their FX crew dispensed with the shiny, too-clean (as well as too tiny to my eyes) skull of Johnson's film as well as with the cartoony CG flames and really delivered a GR that looks 100% intense. Here the skull is charred and scuffed and the flames look convincing with plumes of thick black smoke coming off them. But as good as GR looks from an FX standpoint, it's really Cage's performance that sells it. His body language is great, giving GR a repertoire of distinctive movements that show that this character isn't just something belched out of a computer. The Ghost Rider is depicted as much more of a classic movie monster this time around rather than as a superhero and Cage clearly relished the chance to play that end of the part. As great as some of his lines as Blaze are, I loved some of his wordless bits as GR just as much.

This movie certainly isn't going to be an across the board crowd pleaser but then, brimstone bikers aren't for everyone. Nor is Nicholas Cage's acting nor is Neveldine/Taylor's style of filmmaking. So what you've got with Ghost Rider: Spirit of Vengeance is a movie that will inspire either admiration or confusion. Comic book adaptations are the stuff of mainstream blockbusters these days but Spirit of Vengeance is one film that puts the cult crowd first. 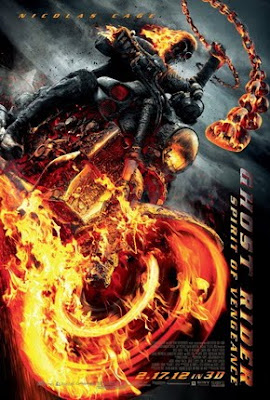 Glad you got some enjoyment out of it, I think I will have to skip it or wait for bluray. I love a bad Nic Cage movie!!!

Exactly the kind of reaction I expected from this kind of film, not a masterpiece, but entertaining. The previews have me sold on it. I will be seeing it sometime next week. I saw a little video of how these guys shoot their movies, and its really something, the risks and the "extreme" thing they put into it.

Mummbles, if you like a bad Nic Cage movie, I think this will be a worthwhile DVD rent for you.

FC, I did find this entertaining but I can see how it wouldn't play well with most people.

I felt like the movie was a bit slow at times, at it felt like the producers had reigned Neveldine/Taylor in. That said, I still found large portions of it extremely entertaining.

I am intrigued by your review of this film. Not a huge fan of the first one but hiring the CRANK boys to tackle this film was an inspired choice as it sounds like they bring some of their Gonzo energy to the proceedings.

Bob, by objective standards I couldn't call SoV a good movie but it kept me well entertained.

J.D., this is not as out there as the Crank films but it's still pretty nuts. Definitely give it a shot on DVD or for a matinee. This won't be everyone's cup of tea so I wouldn't push anyone to pay top dollar for it.