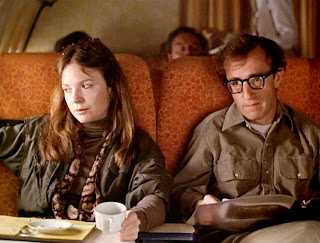 Last month marked an unfortunate milestone in this blog's history: it was the first time that I've gone an entire month (nearly two, by now!) without a single post. Thinking about the status of Dinner with Max Jenke makes me think of Woody Allen's conversation with Diane Keaton in Annie Hall (1977) as they fly back to New York from their trip to LA:

"A relationship, I think, is like a shark. You know? It has to constantly move forward or it dies. And I think what we got on our hands is a dead shark."

Likewise, DWMJ hasn't been moving forward lately and by now it's looking suspiciously like a dead shark.

The reason for the inactivity mainly boils down to a lack of time. I seldom have the time to watch a movie just for the sake of my own enjoyment, much less devote additional time to writing about it afterwards. Even though things might often seem half-assed here, I do actually like to be able to write to the best of my abilities - such as they might be.

Anyhow, for anyone who's been stopping by to see if things are still up and running - yes, they are. Things have been on a hiatus but for now, the shark is still swimming.

Happy to hear that the shark is swimming. I've been reading since the UNDERTAKERS LOUNGE days and I always enjoy.

Thanks CB - I appreciate it!

Glad to hear there's still some life in the fish.

Jeff,
Glad to hear the shark's just biding its time. I'm hip to where you're at; I'm hardly posting at the rate I'd like to (Homer Simpson voice: "Stupid life getting in the way of blogging!").

Thanks for the update Jeff, and I totally hear you on lack of time to watch/enjoy a movie, let alone take notes and write well about it afterward. I'm hitting a milestone with my blog next month and have been mulling over whether or not to continue, for several reasons.

Anyway, glad to hear the shark is still swimming.

I'm happy for any tidbits you toss our way.
I too have been reading your thoughts for a long time and I'll keep hanging around till you really feel you have something to say (and the time to say it).