As yet another comic book adaptation rules the box office landscape with Man of Steel's opening bow this weekend, turn your attention to one of the most famous failures in that sub-genre - 1994's legendary Roger Corman-produced Fantastic Four. Never given an official release, the Corman FF remains a popular item on the bootleg circuit.

Filmmakers Marty Langford and Mark Sikes are seeking to expose the story behind this fascinating misfire, a film that struggled with very limited means to do justice to the characters that formed the foundation of the mighty Marvel Universe. 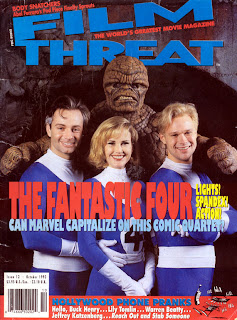 Despite the movie's shortcomings, there's a sweetness and an earnestness that shines through and a clear desire to honor the essence of Stan Lee and Jack Kirby's fabulous foursome. And when you're talking about trying to mount an adaptation of a comic that features characters who can stretch their body at will, burst into flame, turn invisible and project force fields, and transform into orange rock all on a $1 million budget, you're talking about working some real miracles! As a film and comic book fan, that's a story that I'd love to hear, told in the words of the people who were there.

Marty and Mark are currently raising funds for their film, entitled Doomed: The Untold Story of Roger Corman's Fantastic Four at this link. Give it a look and see if you'd like to contribute to their cause.

Help make sure this film is not 4-gotten! It's Documentin' Time!