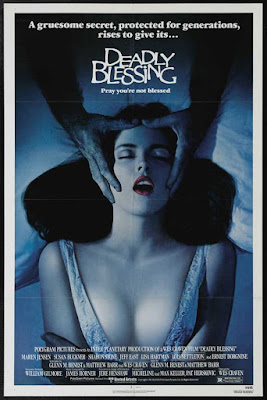 Director Wes Craven has made horror history many times over and, most impressively, done so over the course of several decades. He first changed the landscape of horror in the ‘70s with The Last House on the Left (1972), then in the ‘80s with A Nightmare on Elm Street (1984), and again in the ‘90s with Scream (1996). With all due respect to those seminal shockers, though, my own personal favorites from Craven’s catalog tend to be the less heralded ones. Number #1 for me is 1981’s oddball offering Deadly Blessing.

Released at the height of the slasher craze, Deadly Blessing employed some stock elements that were already over-familiar from the sub-genre – a rising body count, macabre deaths, menacing POV shots, multiple red herrings, nubile females in peril (including a young Sharon Stone in her first film role), and, of course, the killer’s identity is concealed until the climax.

In those ways, Deadly Blessing is easily identifiable as a horror film that came out in the same year as Happy Birthday to Me and Graduation Day. It bears well-worn earmarks of the slasher genre that place it in its particular era. But beyond those familiar riffs, Deadly Blessing is much more idiosyncratic than the routine slashers that it shared marquee space with in ’81.

Set in an idyllic rural area, Deadly Blessing tells the story of Jim and Martha (Doug Barr and Maren Jensen), a loving young couple who have a testy relationship with an Amish-like religious sect called the Hittites that lives next to their property. Doug used to be a Hittite himself but he left the sect to marry Martha, earning the eternal wrath of his father Isaiah (Ernest Borgnine), who also happens to be the Hittite’s inflexible leader. Isaiah considers Jim to be an abomination in the eyes of God now and he forbids any of his people to communicate with him, including Jim’s mother and two younger brothers (the oldest of which is played by Jeff East, from Craven’s 1978 TV movie Summer of Fear).

The bad blood between Jim and his family goes forever unresolved as Jim falls victim to a mysterious “accident” while alone in his barn late one night, crushed to death by a tractor. Once news of the tragedy reaches them, Martha’s best friends – Lana (Sharon Stone) and Vicky (Susan Buckner) – come to support her in her time of grieving. On top of the tension brought by having a whole trio of liberated modern women roaming the countryside under the Hittite’s disapproving watch, there is also the matter of a killer being on the loose.

Even though Jim’s death is believed to be an accident, a mysterious figure in the barn that night was the one that loosened the tractor. And in true slasher movie fashion, whoever the killer might be, they could be one of a whole range of possible suspects. Is it the stern Isaiah, out to cleanse the world one sinner at a time? Is it William Gluntz, the strange young Hittite (played by Hills Have Eyes poster boy Michael Berryman) who shows a proclivity for being a Peeping Tom? (It’s doubtful that any genre fan would peg Gluntz as the killer – he’s a true slasher movie red herring a la Robert Silverman’s Prom Night janitor).

Or in some strange, psychological twist could it even be Martha herself?

If you haven’t seen Deadly Blessing yet, save your guesses about the outcome – it’s impossible to anticipate where this movie is going, except to say that the makers of 1983’s cult fave Sleepaway Camp might have been taking notes. As much as the killer’s reveal is an unexpected doozy, Craven manages to top that craziness by dropping a supernatural element (mandated by the studio) in at – literally – the last minute.

Not everything gels in Deadly Blessing but it scores points for being different – even at the cost of logic – and it has a couple of scary sequences that rank among Craven’s best. At a time when horror films were very much carbon copies of each other, Deadly Blessing had its own quirky angles to play.

An important component that ties Deadly Blessing’s scattershot nature together is the score by James Horner, then at an early point in his career but soon to become one of the most popular composers in Hollywood (despite his Oscar for Titanic, he’s probably best known to genre fans for his Aliens score). At a time when many horror films, especially low budget ones, had scores that simply mimicked Carpenter’s work on Halloween, Horner gave Deadly Blessing a creepy Omen-esque score, marked by ominous chanting.

Even though Deadly Blessing has been an often overlooked entry in Craven’s filmography and even though Craven is not the sole author of the screenplay (he shares credit with Matthew Barr and Glenn M. Benest), the clash of cultures embodied by the conflict between the Hittites and the “serpents” of the modern world places it on common thematic ground with Craven’s other work wherein different families or communities find themselves at deadly odds with each other (witness the degenerate Krug and co. vs. the accommodating middle class Collingwoods in Last House or the irradiated mutants vs. the vacationing Carter family – one “nuclear” family against another – in The Hills Have Eyes).

Deadly Blessing also comes across as something of a dry run for A Nightmare on Elm Street. Not only is an eerie dream sequence involving Lana the film’s most memorable moment (immortalized on Deadly Blessing’s poster) but there is also a suspenseful scene in which Martha is imperiled in a bathtub that Craven would restage in the first Elm Street.

Not really a hit at the time and kind of forgotten about today, even by many genre fans, Deadly Blessing nonetheless made an impression. Memorable episodes of both Friday the 13th: The Series (“The Quilt of Hathor”) and The X-Files (“Genderbender”) show an obvious debt to its influence, with each involving eerie goings on in strictly religious communities. Now that Scream Factory is due to be blessing fans with a Special Edition Blu-Ray of this film (due January 22nd), hopefully it will finally garner the larger fanbase that it deserves.

Originally published 1/14/13 at Shock Till You Drop