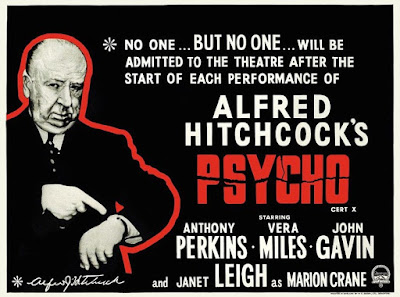 I believe that every horror fan has a list of movies that came out before their time that they wish they could’ve experienced first run in the theaters. As much as one can still appreciate classics like Jaws or Night of the Living Dead even if they first encounter them decades after their initial releases, the fact is catching up with a classic after the fact can’t quite compare with the seismic experience of seeing a game changing film fresh out of the gate with an unsuspecting first-time audience – long before every moment of the film has been committed to the cultural lexicon.

If I had my own movie-going time machine at my disposal, at the very top of my must-see list would be 1960’s Psycho. I would love to see that film with an audience that had no idea what was going to happen – and even more, to experience it with an audience that wasn’t jaded by the many decades’ worth of slasher pics inspired by Psycho.

As part of Psycho’s promotion, Alfred Hitchcock forced theaters to employ a then-unprecedented policy of not letting any patrons in after the film had begun and he also urged viewers who had already seen the film to keep the film’s secrets to themselves. The marketing of Psycho was very much about preserving the surprise, to keep the viewing experience as pure as possible. But it’s a testimony to the airtight artistry of Hitchcock as well as that of screenwriter Joseph Stefano (adapting Robert Bloch’s novel) and the film’s cast (particularly the irreplaceable Anthony Perkins and Janet Leigh) that even long after Psycho has lost the ability to ambush viewers that it still endures.

It may not shock in the same way it once did – only that first generation of Psycho viewers ever really experienced the movie in that way – but it still chills and entertains and fascinates. Despite the way that Hitchcock sold Psycho, shrouding it in secrecy, it wasn’t simply a cinematic sucker punch destined to only work on the uninitiated. Instead it was a movie that revealed its wicked sense of humor only after its secrets were fully known and it’s a movie that is also possessed of a piercing, and perpetually timely, understanding of life’s sadness with its characters that “never budge an inch” from their private traps.

Amid all the accolades that Psycho has received in the fifty-plus years since its release, the one common nitpick revolves around the penultimate scene, in which Simon Oakland’s psychiatrist character explains, in tedious detail, Norman Bates’ schizophrenia. The psychiatrist is purposely depicted as a self-satisfied windbag.

When Lila Crane (Vera Miles) asks if Norman killed her sister, rather than giving Lila the courtesy of a straight answer, the psychiatrist instead responds “Yes…and no.” Oakland plays the psychiatrist as someone who’s somewhat smug and who enjoys playing to an audience. His long winded explanation is all about demystifying what we’ve seen transpire in the fruit cellar.

But then Hitchcock pulls the rug out from under that speech by bringing us back to Norman in his cell and letting us hear “Mother’s” thoughts (the voice of actress Virginia Gregg, who returned to voice Mother again in Psycho II and III before her death in 1986). While everything that the psychiatrist says about Norman may be true from a clinical standpoint, the coda with Norman shows just how empty those words are.

Hitchcock could’ve let the audience off the hook with Oakland’s explanation and left it at that. Vera Miles and John Gavin could’ve walked out of the police station after Oakland’s speech with a big ‘The End’ title imposed over them. That would’ve signaled the restoration of normalcy. But in letting Mother’s thoughts be the film’s final words, Hitchcock kneecaps everything Oakland just said and thumbs his nose at any attempt to comfortably explain away Norman’s madness – or madness in general, for that matter.

The second half of Psycho in which Lila, Sam, and the ill-fated Arbogast (Martin Balsam) try to unravel the mystery of the missing $40,000 that Marion stole from her boss is all about people looking for rational answers. To their mind, the money must be at the heart of it. Either Bates killed Marion (Janet Leigh) for her money or Bates is hiding Marion or some variation on either of those scenarios. They’re looking for motives that make a “from point A to point B” kind of sense.

In the end, though, Psycho guts the search for rationality and gives madness the upper hand. While the influence of Psycho lives on with the murderous “Bloody Face” terrorizing TV viewers on this season’s American Horror Story, the serial slayer of The Collection butchering on the big screen, the making-of Psycho tale Hitchcock now in theaters as well, and a Bates Motel prequel series coming to A&E next year, Psycho itself remains the Mother of all shockers.

Originally published 12/1/12 at Shock Till You Drop