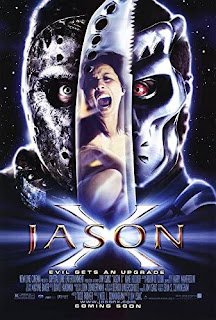 Man, it feels like these October days are just burning away faster and faster. Honestly, how is it possible that we're little over a week away from Halloween? I'm telling you, there's just no keeping up! But anyhow, as much as this Halloween season (along with the rest of 2020) is feeling like a dismal wash, one bright spot this month has been the arrival of Scream Factory's glorious Friday the 13th box set. 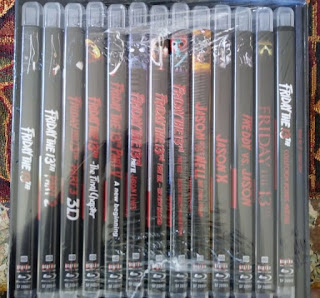 The fact that I own all of these movies many times over in various formats doesn't diminish any of my geeky excitement over having them all together for the first time in one beautifully designed package. The box, the casings, the discs themselves, it all looks wonderful - such a difference from the "who cares?" attitude that Paramount always seemed to bring to the original eight films.

Warners/New Line was always a little better in packaging their entries but having all twelve films together in a set that shows real care across the board is awesome. The only reason any fan will ever need to upgrade now is if the legal obstacles to a new film are ever cleared and we finally get Friday the 13th Part 13. I have to imagine it will happen at some point. I mean, come on, how could it not?

In the meantime, though, having this set is compelling me to revisit the entire series (which is only making it seem even less like October - I associate Friday with the spring and summer, not the fall!) and, of course, all the trailers.

One of the best of the bunch, in my opinion, remains Jason X.

What a splendidly cheesy trailer this is! While there's an automatic eye roll effect that happens as soon as fans hear a slasher series is heading to space, I love that this trailer doesn't care about that. It leans into the premise and sells it hard, like it's the coolest thing that ever happened.

Sure, one could say that it gives away too much. It could be argued, I suppose, that it would have been better to keep Uber Jason under wraps as a surprise to be delivered by the movie itself but I say to hell with that. Far better to just put it out there. It's the movie's big selling point so why hide it? You can't have your tagline be "Evil Gets An Upgrade" without showing what that upgrade's gonna look like.

Of course, all the coolness of the Uber Jason design aside (how much of a bummer is it, by the way, that we never got a Jason X 2? I would have loved to have seen Kane Hodder come back and rock that look at least one more time), it's really the Drowning Pool song that makes this trailer. It was a stroke of genius on whoever it was in the New Line marketing department who thought to slap "Bodies" on this.

Call that song corny if you will but as soon as it kicks in, it's like "Oh yeeeeaah!" And from the vantage point of 2020, hearing it now brings on a such warm rush of early '00 vibes.

Back then, those years did not feel like such a great era but, you know, we got through 'em and so now that time has its own kind of nostalgic glow. Let's hope we'll be able to say the same about this time we're living through now one of these days. No matter what, as Jason X shows us, we've always got to keep our eyes on the future.

Chances are, some cool shit is likely to go down there. 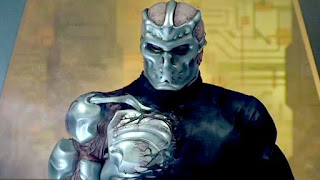 Love Jason X - good fun, all around. Wish I had money for the box set, but I already own two copies of each film, and it isn't logical to spend that. Glad you are enjoying it though! And yeah - slow down, Halloween!

For real, Joe! Halloween's just days away now and at this point there's no way I'm going to get to all the movies I usually like to before the 31st hits! Oh well, just gotta squeeze in whatever I can! Hope you're enjoying the season!