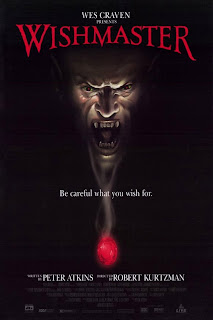 I believe that only a certain type of person could ever be hyped for Wishmaster. That isn't a knock on it at all, just a statement of fact.

No matter how this movie was marketed, it was only going to speak to a certain segment of movie goers. While there's definitely a non-genre audience that can get excited for the likes of, say, Misery or Bram Stoker's Dracula or whatever, Wishmaster is another matter.

Released in 1997, Wishmaster had '90s direct to video written all over it and yet was given a wide theatrical release. Anyone catching this trailer knew immediately whether it was for them or not.

Every second of that trailer is pitched squarely to FANGORIA subscribers, not to the kind of wider audience that was fueling the then-resurgence of theatrical horror, kicked off by Scream in '96.
Right from the Live Entertainment logo to the "Wes Craven Presents" label to the appearance of genre faves like Tony Todd and the corny vibe of the Wishmaster himself (played to hammy perfection by Andrew Divoff), this was not the stuff of mainstream blockbusters.
No, this was something that you'd grab off the shelf of your local video store, alongside Leprechaun 4: In Space. But that's what I love about Wishmaster. It's a movie for hardcore horror nerds that somehow got an unlikely break and played on the big screen. 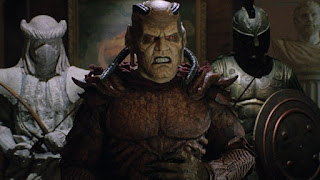 The month after Wishmaster's release, both Devil's Advocate and I Know What You Did Last Summer were released to theaters, just in time for Halloween. Both of those films had the kind of mainstream appeal that Wishmaster didn't. In the case of Devil's Advocate, you've got big stars like Keanu Reeves and a big budget and in the case of I Know What You Did, you had stars on the rise like Sarah Michelle Gellar and Jennifer Love Hewitt and a screenplay penned by Scream's Kevin Williamson. With Wishmaster, on the other hand, you had a screenplay by the guy who wrote some of the Hellraiser sequels and cameoes by Ted Raimi, Kane Hodder, Robert Englund and Tony Todd - with a voice over appearance by Phantasm's Angus Scrimm to boot! 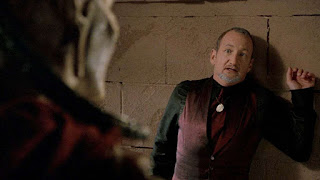 And yet, Wishmaster did well enough to spawn three direct to video sequels! So many efforts to deliberately create a new horror icon tank that you have to give Wishmaster credit for actually successfully launching a franchise. True, Wishmaster may not be a household name like Freddy or Jason but, hey, he's got four movies to his name and that's the kind of success that the people behind Dr. Giggles or the Trickster would have made their own wish to the Djinn for! 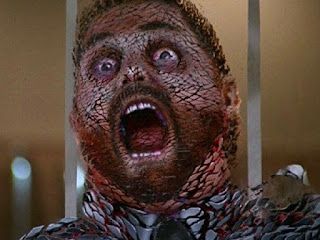 Hey, I've never seen Wishmaster!
I think I've had it confused with something else, but it looks fun. I'm definitely going to track it down.

Give it a shot! It's a fun movie. It's definitely a real '90s FX extravaganza, a good chunk of it being practical.

Watched it last night!
Definitely fun! VERY 90s. Too goofy to be scary, but a neat concept.
The main bad guy (in human guise) reminds me of that insurance ad 'Mayhem' guy... I wonder if Wishmaster was the inspiration?

Haha, I would say probably not but anything's possible. Glad you liked the movie!