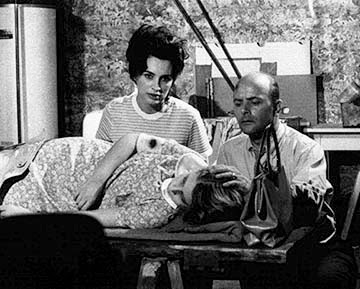 In his role as the belligerent Harry Cooper in the original Night of the Living Dead (1968) as well as in his various behind-the-scene roles in that seminal film's production, the late Karl Hardman Schon (1927-2007) was integral in realizing Romero's masterpiece, making him one of the architects of modern horror.

But aside from the incalculable debt owed to Mr. Hardman by legions of fans, in honor of his passing I'd like to acknowledge a seldom-spoken truth about his most famous role. And that truth is this: Cooper Was Right.

Sure, Duane Jones' Ben successfully marshalled the scared group holed up in that farmhouse into action, making him the heroic opposite of the craven character that Hardman portrayed so well. And yet Ben was also fatally wrong. Had the band of survivors listened to Cooper's advice to stay in the cellar, they all would've made it safely to morning. Well, all except for Cooper's daughter Karen - played by Hardman's real-life daughter Kyra Schon. But still, Cooper's insistence that the cellar would be a safe refuge turned out to be 100% sound. He may have been right for all the wrong reasons but regardless, his instincts on successfully weathering a zombie siege have proved to be self-evident. It's his atrocious people skills that did him in.

So here's to you, Cooper - if you weren't handicapped by such an abrasive personality, history might've told a very different story of the Night of the Living Dead.
Posted by Jeff Allard at 12:12 PM

Email ThisBlogThis!Share to TwitterShare to FacebookShare to Pinterest
Labels: Karl Hardman, Night of the Living Dead

I still say they should have gone upstairs and knocked out the stairs...
Zombies can't climb and there are still the upstairs windows to see/escape out of...

Plus there's probably a bathroom up there.

Yeah, I guess hindsight really is 20/20 - especially when it comes to taking the proper measures to protect yourself against a zombie horde.