Make Every Wish A Death Wish 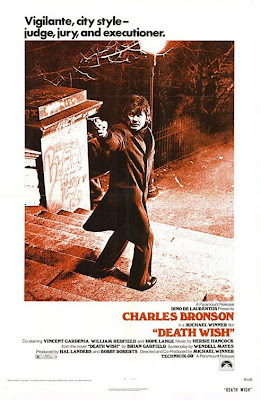 I couldn't let the opening of The Brave One (which puts director Neil Jordan in the company of exploitation filmmakers such as Meir Zarchi and Abel Ferrara) go by without a nostalgic nod to Death Wish, the 1974 vigilante classic that forever associated actor Charles Bronson with street justice.


Bronson's portrayal of Paul Kersey makes me think of Nicholson's Jack Torrance in The Shining. When The Shining begins, Nicholson is supposed to be this affable, normal (if flawed) family guy who only goes crazy once the specters of the Overlook worm their way into his brain. But of course, we know from first sight that Nicholson would be every bit as bat-shit had he spent the winter caretaking a condo in Hawaii. Similarly, from the start of Death Wish, Bronson already looks like he's ready to blow a Buick-sized hole in anyone fool enough to share a sidewalk with him long before his wife and daughter suffer their brutal assault. The makers of Death Wish might've served Kersey's character arc better had they cast a meeker actor in the role so his turn from left-leaning dude (we're told he was a Conscientious Objector during the war) to dispenser of hot justice wouldn't feel so predetermined but ultimately Death Wish isn't about portraying a character's journey - it's about Charles Fucking Bronson making punks shit their pants before they die.

1985's Death Wish 3 is actually my favorite of the series. By that time, Kersey was essentially the Rocky of violent death (and just like the Rocky films, the Death Wish series had abandoned the relative believability of the first two films in favor of crowd pleasing cartoonishness by the third entry) so to have him coaching a neighborhood full of AARP members on how to kill gang members with extreme prejudice was as rousing as movies could get. I remember an elderly Martin Balsam getting thrown down a fire escape during the course of the film and that was just so wrong. Trivia Minute: Gang Leader Gavin O'Herlihy (coming across here as the poor man's Frank Doubleday) was originally the long-lost older brother 'Chuck' from Happy Days.

I hope Jordan scores a winner with The Brave One but I don't think the ruthless sensibility a movie like this should have will be there. But for whatever reason, Bronson and director Michael Winner (who stayed with the Death Wish series throughout its first three installments) found wasting human trash to be a wish come true.
Posted by Jeff Allard at 8:42 PM