The Road To Wellville 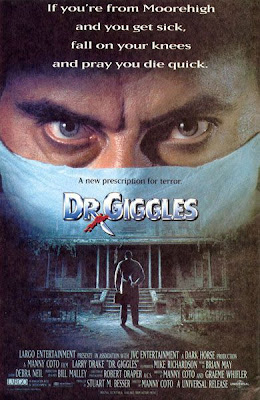 Twenty-five years after their hey-day, it's become fashionable to regard the slasher films of the early '80s - no matter how pedestrian they might be - as horror classics. At present, however, their late '80s/early '90s counterparts have not received the same kind of reappraisal. In fact, I expect the slashers pictures of that era will forever be regarded as substandard. But that won't deter me from giving some critical care to the mad medico known as Dr. Giggles.

Directed by Manny Coto, Dr. Giggles was an awkward attempt to create a horror villain for the '90s, with the resulting film destined to be remembered alongside such other would-be franchise starters as Shocker, Ghost in the Machine and Brainscan. But maybe I'm in need of medical attention myself as I (and I alone) continue to nurture an indulgent fondness for this movie. Fifteen years after its release in October of 1992, I hold that Dr. Giggles remains a slight but satisfying example of severed-tongue-in-cheek humor.

The script by Coto and Graeme Whifler (who recently wrote and directed the reportedly grim thriller Neighborhood Watch, his first effort since Dr. Giggles) brushes over their story's cliched beats - lunatic escapes from asylum only to make an expedient return to his hometown to stalk unsuspecting teens - with a series of grotesquely funny set-pieces that display a comic book sense of exaggeration (the film was in fact adapted as a four-issue miniseries from Dark Horse Comics meant to tie-in to the movie's release). And actor Larry Drake's portrayal of Dr. Evan Randall Jr., aka Dr. Giggles is purposely larger than life.

As Dr. Giggles uses every instrument in his medical bag (including some that would make the Mantle brothers cringe) to leave no patient breathing, the film fulfills the lurid promise made by the poster to 1981's Happy Birthday To Me, which promised to show "six of the most bizarre murders you'll ever see." That earlier film ultimately failed to show much invention when it came to annihilating its cast but Coto and Whifler take their medical theme and not only run to the wall with it but run it through the wall. Perhaps it's best that a Dr. Giggles 2 never happened as nothing is left on the (operating) table here. It's as though Coto and Whifler had planned a series of Dr. Giggles films, had come up with enough gore gags to fill them all but then decided that they'd better not take the possibility of even one sequel for granted and put their best ideas into this first outing, making Dr. Giggles its own "Best Of" of a series that never was.

They also exploit their medical motif with every possible pun and one-liner related to any well-worn medical cliche one might think of. The incessant corniess of such an approach may be the single most alienating aspect of the film but I love that Drake is able to deliver every groaner in the script with equal enthusiasm.

Giggles' victims - including future Charmed' star Holly Marie Combs, the late Glenn Quinn (best known for his role in TV's Rosanne), and '90s personality Doug E. Doug - are a pretty bland bunch but no more so than one would find in any other slasher film. This film is all about making Dr. Giggles himself into the next horror superstar. Unfortunately, the makers of Dr. Giggles forgot that the biggest horror icon of that time, Freddy Krueger, had only became funny as his series went on. It was the intense, genuinely scary first film that had created a demand for more.

Perhaps if he had been portrayed with a little more gravitas in this picture, Dr. Giggles would've gone on to be a successful send-up of his former self. As is, Coto and Whifler left audiences with no reason to see what a Dr. Giggles IV, V or VI might look like. It may have been a flawed strategy on their part in terms of launching a successful horror franchise but I continue to appreciate the 'sick' humor of their character's singular appearance.
Posted by Jeff Allard at 9:55 PM