If It's Halloween, Can It Please Not Be Saw? 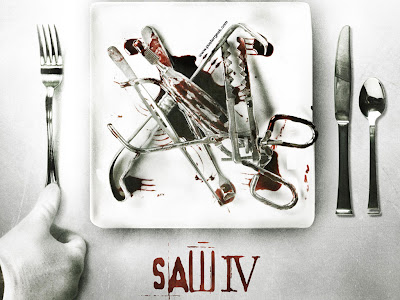 Ads are currently trumpeting the return of the reigning king of Halloween horror to theaters - Saw IV is coming and given the financial success of the series' previous three outings, the arrogant tone of Lionsgate ad campaign - "If It's Halloween, It Must Be Saw" - isn't an unearned boast. But that tagline is just obnoxious, don't you think? I'm sure lots of nice people work on these films and Tobin Bell really is a terrific actor but Lionsgate is just getting too full of itself when it comes to pimping their most famous franchise.

I mean, hey - I grew up on horror franchises. Every year throughout my adolescence there was always a new Nightmare on Elm Street, Friday the 13th, Halloween, or Hellraiser coming to theaters. But as big as those series were, they never publicly pat themselves on the back as odiously as Saw. And that's ultimately what rubs me the wrong way here - thanks to Lionsgate's marketing, Saw is just too self-satisfied to be any fun.

I don't want to sound too churlish about it - after all, as a horror fan I want there to be a reliable big screen fix every October. But, man, does it always have to be Saw? Here's hoping that 30 Days of Night will be a big enough success to force Lionsgate to alter their marketing plans next year for Saw V.
"...If It's Halloween, It Might Be Saw." Yeah, now that sounds better.
Posted by Jeff Allard at 5:31 AM