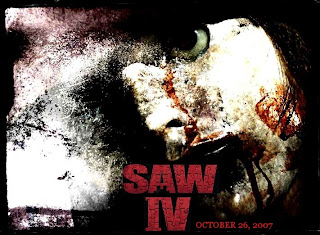 Based on the strong showing of Saw IV at the box office this weekend, it's clear that the Saw franchise has not worn out its welcome with today's horror audience. Among this decade's would-be fear franchises, only the Saw series has been able to sustain popular interest. The Ring, The Grudge, and Hostel all found a wan response to their first (and to date, only) sequels and Saw's most successful competitors, the Final Destination and Resident Evil series, made it to their third films but with little fan demand left for more. In the meantime, the Saw films are proving to be the defining horror series of their time, impervious to box office failure.

Personally, I wish that the Halloween season could be dominated by a horror series that was more inclined towards the ghoulish, the supernatural, and the macabre. The bone-breaking death traps of the Saw films just don't suit my perception of the witching season. But clearly that's strictly my hang-up as for a whole generation of horror fans, Halloween will be forever synonymous with Saw. That's proven to be cagey marketing on the part of Lionsgate but I think the Saw films would have found the same success regardless of their release date.

Like the popular horror series of (semi) old, the graphic gore of the Saw films provoke the same knee-jerk outrage that greeted the slasher franchises of the '80s (which is fine, because it just isn't fun to follow a horror series unless it's pissing off your uptight elders). But more important is the Old Testament brand of moralizing propping up the series' baroque violence. The Saw films, and its figurehead Jigsaw, are all about teaching life lessons with each kill. If the moral message of '80s slasher movies was that indulging in unmarried sex, drug use and general carousing was as good as putting a machete to your throat, the Saw series has met a more drastic set of social problems with a much more drastic set of solutions.

Beyond the series' byzantine plotting and signature twists, I think this is what fuels the Saw films and makes Jigsaw an ever-more interesting psychopath. As played by with weary determination by Tobin Bell, Jigsaw is someone who is smart, perceptive, and above all, honest (and industrious as well - even in death he's tireless). This is not a hulking cretin lurking in the bushes waiting to skewer nubile teens, and he's not a jokester. He's out to make the world better, one hopeless case at a time. As our social standards becomes more permissive, as we see the lazy, the criminal, the vain, and the simply stupid thrive at the expense of others - it's not surprising that Jigsaw would be embraced as the boogeyman (or the avenging angel) of our current age.

We live in a world where notions of right and wrong have become flexible to the point of meaninglessness. We practice situational ethics, adopting whatever morals personally benefit us from moment to moment. And the public figures who are supposed to lead by example are often the greatest abusers of this. In a compromised world that pays only lip service to the morals it's supposed to live by, Jigsaw is someone who doesn't waver in his convictions, who doesn't give ground to excuses, and who regards anyone who can't live a responsible, unselfish life as being fit to perish.

Director Stuart Gordon has long expressed his plans to send Herbert West to the White House for the next Re-Animator. But perhaps a team-up is in order as it's really Jigsaw that ought to arrive at 1600 Pennsylvania Ave. Once Jigsaw is back on his feet thanks to West's serum, he can put the current administration to the test ("Hello, Mr. President. I want to play a game.") and restore morality to the Oval Office in time for next year's election. But that's the kind of gimmick only a waning horror series would have to resort to. Based on Jigsaw's big score this weekend, the White House (as well as Manhattan and outer space) will be safe from Saw for a long time to come.
Posted by Jeff Allard at 6:13 AM