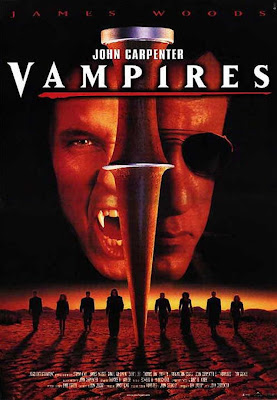 Director John Carpenter knows more than his share about anti-heroes. The creator of such hard-bitten characters as Napoleon Wilson, Snake Plissken and R.J. MacReady has given the cinematic world many a Bad Man to contend with. But in 1998, Carpenter made the rest of his run of antisocial outlaws look like soccer moms next to Jack Crow, a vampire slayer who tolerates humans only barely better than he does bloodsuckers. When John Carpenter's Vampires was released in the fall of '98 on the heels of the summer smash Blade, it was found by most audiences to be lacking the visceral excitement of that bigger-budgeted vampire film. And fans of the John Streakley novel Vampire$ groused for their part that Carpenter failed to do the novel justice. Well, boo-fucking-hoo to all that.
Carpenter doesn't do anything special with this film's action set-pieces (they're a bit on the lethargic, who-gives-a-damn side) and the vampires themselves are standard-issue goth creatures. But I love James Woods' portrayal of the perpetually enraged Jack Crow. Woods tears into the opportunity to go larger than life with such a ruthless character and Carpenter goads him on every step of the way. Whenever Woods is onscreen (which is a lot) the film is a field day of overplayed machismo with no one in the cast being safe from Woods' pimp hand, least of all Father Adam Guiteau, the hapless, well-meaning priest (played by Tim Guinee) who Crow all but takes a blowtorch and a lead pipe to.
Even if you're someone who doesn't like Vampires, which seems to include almost everyone, please give Carpenter some credit here. After all, never in the annals of cinema has a film's hero beaten a priest, shoved a gun in their face, and afterwards taunted them by asking whether the savage beating they just received had sexually aroused them. ("Let me ask you something - when I was kicking your ass back there, did that give you wood?") The fact that Guinee's character becomes such a devoted acolyte of Crow by the end of the film - after Crow inflicts further acts of violence on him such as cracking him across the face with a phone, slicing his hand open with a knife, and punching him in the stomach - makes Guinee's situation a plain parallel to the symptoms of abusive relationships: surely a historic first between two male characters in an action film. And when he's not beating Guinee's meek priest, Crow is shoving, slapping, and verbally berating Katrina (played by Sherly Lee), a freshly feasted-on hooker kept under Crow's watch for the purposes of the hunt.
Perhaps intentionally due to Carpenter's affection for the Western genre, Crow is depicted as being as single-minded as John Wayne's Indian-despising Ethan Edwards in John Ford's The Searchers (1956). In fact it's easy to imagine Crow himself delivering a variation on these grim lines from Ethan: "...Seems like he never learns there's such a thing as a critter that'll just keep comin' on. So we'll find 'em in the end, I promise you. We'll find 'em. Just as sure as the turnin' of the earth."
Almost ten years since its release, Vampires hasn't garnered much of a cult. But I think it's ridiculously entertaining. From the first time I watched the film, I got the feeling that Carpenter had intentionally gone all out - for the purposes of his own amusement, if nothing else - in making Jack Crow such a hardcore sadist, misogynist and racist. While those around Crow fall prey throughout the course of the film to such human foibles as fear and love, Crow suffers no such weaknesses. Carpenter revels in the only-in-the-movies fantasy that Crow embodies - someone so self-reliant and so self-certain that they never need to acknowledge their fellow man or adjust to what the world expects of them. And in that way, this harsh character reveals a romantic longing on Carpenter's part: the desire to never have to live in doubt's shadow.
Posted by Jeff Allard at 5:40 AM