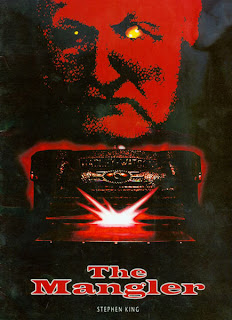 I knew as soon as this film's release on DVD was announced that I would add it to my collection one day. It wouldn't happen immediately, and indeed this film has been out for some time, but it would happen and I've never tried to fool myself into believing otherwise. And this week that time, that implacable destined day, came. Yes, I now finally own Tobe Hooper's The Mangler on DVD.

At the irresistible sale price of just $4.99 at my local Best Buy, you can hardly blame me, can you? I mean, it's not as though my child had to go hungry for me to buy it. Right? Yes, but it wasn't free and that still means I Bought The Mangler. Now, I'm sure a fair amount of fans have also added this to their collections since its DVD release several years ago. But then again, it's likely that it was a blind buy in those cases, from people having never seen the movie during its brief theatrical run back in March 1995. Maybe they were too young at the time, or maybe they were busy flocking to that month's more high profile genre flicks like Hideaway, Outbreak or even Candyman II.

But you see, I did make the time to see The Mangler on the big screen. As a matter of fact, I saw it twice. And I didn't see it twice because I had to confirm that it was really as bad as I thought it was. No, I saw it twice because I thought it was kind of...great. Not Exoricst great, no. Blood still gets to my brain on occasion. But it was definitely "this is pretty cool" great. Like, hey man, Tobe Hooper's still got some fire in his belly! He doesn't have much sense, unfortunately, because no reasonable soul would ever try to make a real horror movie with a demonic laundry press as its villain but the fact that Hooper tried and tried with full sincerity makes him a hero - or at least a Holy Fool - in my book. I mean, this is the textbook definition of a valiant effort. To make this movie and not cover your ass by winking your way through it is pretty awesome in my opinion. And really, the only reason I didn't buy this on DVD sooner is because I was lamenting the lack of special features - surely The Mangler deserved more, no?

I realize that Hooper's effort fell on deaf ears and hard hearts since Day 1 but I'll always champion it. So to Tobe Hooper, let me just say this: Thanks, man. Thanks for trying to scare the sheet out of me!
Posted by Jeff Allard at 5:23 AM

Email ThisBlogThis!Share to TwitterShare to FacebookShare to Pinterest
Labels: The Mangler, Tobe Hooper

Awfully amusing, surely. Thanks for your critique!