We Rent To Own The Night 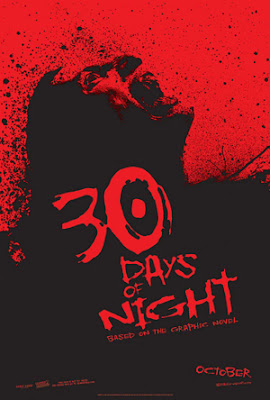 30 Days of Night is a fake horror film living in the borrowed skin of the genuine article. It has the would-be look of a classic - almost monochromatic with stark blues and blacks contrasted against white snow speckled with blood; barren tableaus that make for haunting still lifes. There's also no humor in the film, nothing to give fans cause to decry it as camp. And the feral vampires that set down to feast on the vulnerable town of Barrow, Alaska? Yes, they're fierce. But director David Slade's film feels like the work of someone who only knows enough about the horror genre to try and counterfeit one of his own.

Having not read the Steve Niles/Ben Templesmith comic book (this is one comics fan, by the way, that will continue to detest the usage of the pretentious term "Graphic Novel"), I don't know if I was at an advantage or disadvantage coming into this film. I will say the idea always sounded terrific to me, as it does to virtually everyone. But there's an incredible shot early in this film that at once is a bad-ass visual and on the other hand points up a deep flaw in the story. The shot is a God's Eye overhead of Barrow as vampires run freely through the streets killing every human in sight. All we see is carnage. Within just hours, the sparse population of this town has been bled out in the streets save for a meager handful of survivors.

As much as this looks cool, all I could think of was that these vampires have just consumed 99% of their food supply in less than one day. So, really, what's the point of them staying the rest of the month? For the dozen or so vampires assembled there to pick over what few stragglers might be left? Is that really worth it? Shouldn't they just burn the town down after that (and smoke out whatever remaining humans might be hiding) and move on to the next community? Rather than being slack-jawed with horror at the sight of a whole town wiped out, all I could think of was how this movie had essentially put the cart before the horse. I just watched the climax to the movie in the first fifteen or twenty minutes. There's nothing to keep these vampires in this town or in this movie after this point, but yet they stay.
If the rest of the movie is just meant to be about how the remaining humans will last for the next 29 days, that kind of survival story needs to be dramatized within an inch of its life - we have to feel each day - but Slade's film becomes lost whenever its vampires aren't going for the throat. A movie like this lives or dies on how it handles the moments between the attacks and this one just doesn't know how to sustain that deeper interest in its premise or its characters. I felt that what I was watching would make for a superior video game but didn't have enough of a story to support a feature length movie. I imagine the impulse to go for an action-based narrative was too strong both in the comic and the movie - after all, when you describe the notion of vampires invading a town without sunlight, it's easy to want go for a visceral approach. It just seems right, doesn't it? And I would've thought so too - until seeing this movie.

As 30 Days of Night trudged on, I longed for a film that would've centered on just one vampire that infiltrates this town on the sly, feeling that they have hit on their own private paradise - a near-inexhaustible blood bank. And this lone vampire would work quietly, secretively - never tipping its hand to its presence. The people of Barrow would just think that there was some kind of flu or virus going around. Now that I could've bought. I would've liked to have seen a film follow that type of story in which the people of this isolated town slowly suspect that something is feeding off their blood but yet don't trust whether their perceptions have been affected by the long night. That could've been a creepy, moody horror film. Instead, 30 Days of Night is the Michael Bay version of a vampire movie.


It doesn't help maters that nothing in this film ever feels approximate to real life - even in a vampire movie we have to believe that a real community and real lives are danger. However, the sets and photography are so meticulous and striking that it's impossible to forget that we're watching a movie with a captial 'M'. The artifice never recedes into the background (not helped by the many close-up shots of vampires with digitally altered faces). And the dialogue is similarly jarring. No character in this film ever sounds like they're having a genuine reaction to anything. Contrast that with a movie like The Thing where no matter how outrageous the horror, every response feels true.


And nowhere does this movie feel more contrived than at its climax. A situation arises that Demands A Sacrifice but yet when one character does the unthinkable because There's No Other Option, the film renders it all ridiculous by the reappearance of the sun just moments after this character has made an irreversible choice. Their decision is presented as being the only way to save a character that would've otherwise perished but as it plays out, it's clear that maybe just a little bit of waiting would've been prudent. And by "a little bit of waiting" I mean five minutes, tops. The least Slade could've done as a storyteller is make it look like daylight wasn't just around the corner so this character's selfless act didn't seem like the most wasted of gestures.


As for the vampires, it's bad enough that Slade and co. give these guys a goofy language of chirps, grunts and squawks to communicate in but to then add subtitles that reveal dialogue more howlingly awful than the worst lines we could've imagined is just inexplicable. And why are these vampires even bothering to talk to us in a language we don't understand? Further, why does no one ever bother to ask these vampires "what the fuck are you saying?". That actually might've been cool - to play up the notion that these people are being killed by creatures that are speaking a totally alien language. How frightening would that be? But yet when these vampires do talk to the human characters, it's as though these people are able to read the subtitles right along with us. So what's the point, then?


Under its failings to make its narrative or its characters worth our attention, 30 Days of Night has nothing to offer other than the novelty of its concept. There's no thematic underpinnings, no use of its monsters as metaphor. With a whole month not to worry about the rising sun and with a whole town to themselves, it might've been interesting to see a race of vampires adopt a facsimile of a "normal" life only to know it will ultimately be ripped away from them. But no, these vampires exist solely to jump out intermittently for a cheap scare. Again, what's the point?


With so many remakes, sequels and half-hearted horror efforts plaguing the current genre scene, it felt like 30 Days of Night was a movie that needed to be good. And it's a heart-breaker to find that it isn't. It bites, but it doesn't leave a mark. Now can someone make a real horror film, please?
Posted by Jeff Allard at 6:09 PM

Email ThisBlogThis!Share to TwitterShare to FacebookShare to Pinterest
Labels: 30 Days of Night

Disappointing to hear--I skimmed your review because I still want to see the movie, but your displeasure is clear. As for a recent real horror film, what about The Descent? That's what I'm talking about.

Yeah, The Descent was good stuff. I don't think its been a matter of eons since a really superior horror effort has come along but this current year has been spotty at best.

30 Days just especially irks me because its makers have touted it so much as being a "real" horror film, something that might rank among the classics. And to my mind, it falls way short of that mark.

If people go in looking for an uncomplicated action movie/gore-fest, I can see it working on that level. And for those who do like it, more power to them. But I'm guessing that the overall response is going to be one of boredom.

From everything I'm reading about the movie version, most of its flaws stem directly from the comic (which has been vastly overpraised and has spawned two sequels/continuations which will no doubt be inflicted upon the public eventually).

Everyone is looking for the Next New Thing in Horror to Point The Way - 30 DAYS ain't it, but it'll be ripped off just the same.

The movie definitely gave me a reason to permanently steer clear of the comic. And even though it had a number one opening weekend, I don't think the movie's going to bring in such a big haul when all is said and done. Hopefully that means we won't have a sequel or spin-off on the way to movie screens any time soon.