The Tough Love Of CFQ 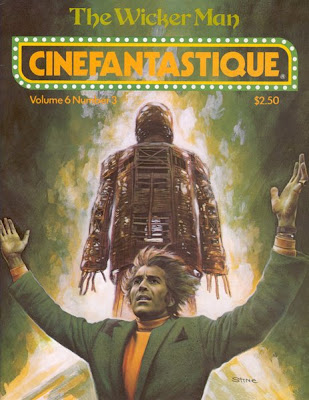 Whenever I look over the coverage of upcoming genre releases in the pages of today's fan press, I always wish that the late, great Cinefantastique was still around to cover films the way they did in their hey-day (which for most fans was the late '70s/early '80s but I think the magazine was still strong through the early '90s).
Although I'm looking forward to reading more about the likes of The Mist, Sweeny Todd, and I Am Legend as their release dates approach, when I see films I'm excited about covered in the pages of Fangoria, Rue Morgue or the mainstream likes of Entertainment Weekly, I can't help but think it's a shame - no matter what the quality of the finished film or how professionally these various venues file their reports - that they'll never have a CFQ cover to call their own.
When I think about the films I love from my childhood and early adolescence, Cinefantastique consistently played a critical role in my appreciation of them. CFQ cover stories devoted to the likes of Conan The Barbarian, Dark Crystal, Blade Runner or The Thing were the fully loaded DVD Special Editions of their day, exhaustively covering every aspect of a film's production.

Of course even CFQ itself, for whatever reason, stopped covering films in the definitive the way they famously used to long before publisher Fredrick S. Clarke's untimely passing in 2000. And it makes me sad to know that there isn't room (or even a demand, it seems) today for the kind of exacting approach that CFQ proudly practiced.
By all reports, Clarke could be a difficult taskmaster but his insistence on excellence resulted in reportage that stands the test of time. When I see Rue Morgue devote a cover to a classic film like The Thing, for example, all I can think of is that RM's efforts look paltry in comparison to CFQ's definitive account of The Thing's production published twenty-five years ago.
Something else that Clarke brought to the table that's sorely missed is his oft-times antagonistic relationship both with his readership and with the filmmakers whose work was CFQ's bread and butter. While most publishers and editors have followed Forry Ackerman's example by portraying themselves as a friend to their readers, as an uncritical fellow fan, Clarke refused to ingratiate himself in that way and instead maintained a prickly, combative attitude that made for challenging (if sometimes exasperating) coverage. And I miss that.
CFQ didn't just champion individual films, it championed a way of looking at films - with an eye that was discriminating, demanding, and informed. And that meant much more than just going behind the scenes of a production or delivering the occasional pan of a film, it meant sometimes rudely challenging fan's assumptions about themselves and the films they cherished. In the end, that irascibility - even when it rubbed me the wrong way - is what I miss most about Cinefantastique.
Genre fans are often predisposed to nostalgia and easy comforts. Thanks to Clarke, CFQ always showed a tough love for the genre. And sometimes that's the love we need the most.
Posted by Jeff Allard at 4:55 AM

Compare CFQ's coverage of STAR WARS, before all the haigiograhphy of Lucas began, to all the ass-kissing coverage that the prequels got.

Their reviews and reviewers were pretty hit and miss, but they were unrivaled when it came to coverage of productions.

I agree, CFQ's reviews were often exasperating. I sometimes wonder who some of these people were (Judith P. Harris and Kyle Counts are two names that spring to mind) outside of their contributions to CFQ and if they've had the occasion to rethink their opinions on the many movies they panned that have gone on to become regarded as classics.