A Crash Course At Crystal Lake 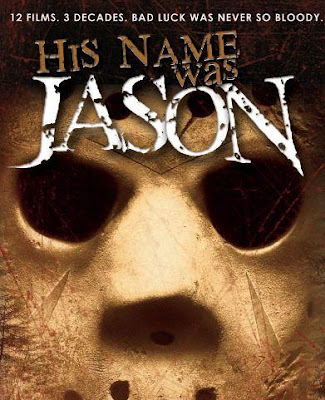 Due February 3rd on DVD, shortly before the Friday the 13th remake arrives in theaters, is the full-length documentary His Name Was Jason. Spanning the history of Friday the 13th (billing itself as "the ultimate retrospective on the groundbreaking horror series") and interviewing many of the cast and crew who have played a part in the series along with filmmakers and journalists from the genre world, His Name Was Jason is a celebration of one of horror most enduring franchises. While it isn't as thorough in exploring the series as Peter M. Brake's massive book Crystal Lake Memories, it's still an entertaining overview.
My review of the two-disc set is up now over at Shock Till You Drop.
Posted by Jeff Allard at 5:15 AM

Email ThisBlogThis!Share to TwitterShare to FacebookShare to Pinterest
Labels: Crystal Lake Memories, His Name Was Jason

I'll have to check this out when it airs on Starz. I have the Crystal Lake book and I agree that it rocks. On a side note, I'm looking forward to the "My Bloody Valentine" uncut DVD most of all. I'm eager to hear what you think of that.

I've had the MBV disc since last week but had to hold off on giving it a look until I was done with His Name Was Jason. Now that I have some available time, I'll be checking it out. It's a weird feeling to know that I'm finally going to watch MBV uncut - I'll post my thoughts on it as soon as I can.

Yeah, it'll be weird to finally see MBV uncut. I am wondering if in some weird way all the years of hype and curiousity will be missed after checking it out. It probably won't be, but that chapter of it's story is closed....