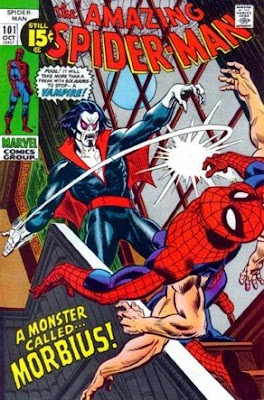 Since Spider-Man 3 failed to live up to most expectations (I liked it just fine myself), Sam Raimi's geek credibility has faltered, even though he previously made two very well-recieved Spidey films (in regards to the kneejerk nature of nerd affections I always have refer back to a Mayor Quimby line from The Simpsons - "You're all a bunch of fickle mushheads!") but with the right storyline for Spider-Man 4, I believe he could find himself back in the good graces of fandom.

Over at CHUD, there's a link to a Raimi interview in which Raimi mentioned his fondness for the character of Michael Morbius, aka Morbius: The Living Vampire. Will Morbius really make it to the screen? I doubt it - but if it did, the blend of horror and superheroics would make a perfect match with Raimi's sensibilities and if he seriously wants Morbius to square off with Spidey, I hope he'll turn his attention to the first Morbius storyline that spanned Amazing Spider-Man issues #100-#102 - penned by Stan Lee himself.

Issue #100 was Spidey's big anniversary issue and to mark the occasion Stan had Peter Parker experiencing feelings of ennui towards his web-headed alter-ego. The title of the issue was "The Spider or the Man?" and as Peter contemplates a future life with his lady love Gwen Stacey, he realizes that it may be time to stop being Spider-Man for good. The last time he hung up his webs was back in issue #50 but this time he wasn't just going to throw his costume in the trash, this time he had come up with a formula that he hoped would wipe out his spider-powers once and for all.
Once he takes the serum, he lays down to let it take effect. He falls into a delirious dream in which he encounters all the foes he's vanquished over the years. And all the while, he feels a throbbing pain in his sides. When he wakes up, the pain is still there, worse than ever. With dawning horror, he realizes the awful truth: while the serum had been intended to take away his spider-powers, it has made him even more like a spider. Subsequently, four new arms burst from Peter's sides, giving him six arms and providing the series with its wildest cliffhanger to date.
When events pick up in issue #101, Peter is not in the best shape. He's terrified of being discovered in this state and makes a desperate call to Dr. Curt Conners, aka The Lizard, who readily offers Spidey the use of his home in Florida, no questions asked. And not far from the section of the Florida coastline where Connors' house sits (a gloomy number that's a dead ringer for the Bates house in Psycho), a doomed ship is ending its final voyage.
The ship in question bears the strange passenger known as Michael Morbius. Through flashbacks we learn that he was once a brilliant scientist working to cure himself of a rare blood disease. He was conducting this research on his own boat, which was equipped with a sophisticated lab. On board with him was his wife and best friend. The experiment - involving a vampire bat, natch - went wrong and within minutes, Morbius was draining the blood from his friend. Unable to resist his urge, he nearly drank from his wife as well but what was left of his humanity forced him to throw himself over the side of the ship, where he was eventually rescued by a passing industrial ship.
Here the story becomes a riff on Dracula and the voyage of the Demeter where the ship's strange passenger kills everyone on board. At this point, Morbius abandons ship and he finds himself washing up on the doorstep of Conners' home - the kind of coincidence that makes life in comic books so much fun.
Once inside, Morbius sees the six-armed Spider-Man working feverishly in the lab. Puzzled by the bizarre sight but needing to feed, he pounces on Spidey, leading to a pitched battle in which Spidey needs all six of his arms to keep Morbius at bay. In the middle of the melee, Curt Conners shows up looking to help Spidey with his research. The sudden strain of seeing what's happening brings on his transformation into the scaly horror known as The Lizard.
The issue ends with a face-off that'd be the envy of any monster movie, as a six-armed Spidey is caught between his reptilian arch-foe and the vampire who wants his blood. 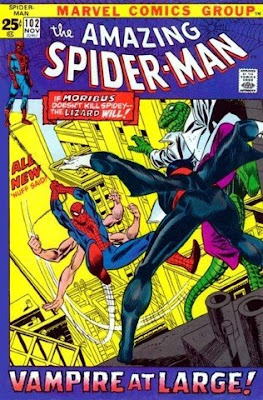 As issue #102 opens, Morbius is beaten back by the tag-team of Spidey and the Lizard (who attacks Morbius only because he refuses to let anyone kill Spider-Man but himself) but not before Morbius takes a small bite out of the Lizard (beggars, apparently, can't be choosers). But due to the Lizard's thick hide, Morbius' fangs can only puncture so much. In the process of taking blood, he ends up passing some sort of enzyme onto Conners, which causes Conners to transform back to his human form but only halfway, leaving him as a hybrid of Conners and the Lizard.
Eventually it all boils down to Spidey and the Lizard needing to get Morbius back so they can draw his blood not only to restore Conners but Morbius' blood might also hold the solution to Spidey's dilemma as well.
Even though circumstances demand that Spidey and the Lizard join forces, Conners frequently loses control of his scaly side and Spidey finds himself trying to keep his new partner from killing him. The terrifying twosome manage to track Morbius to New York City where he's continuing to satisfy his unholy thirst on any and all victims.
In a climatic three way free-for-all, Spidey, The Lizard and Morbius battle above the streets of NY. Morbius' blood is eventually taken, although he desperately fights to retrieve the stolen vial from the hands of his enemies. As the issue ends, The Lizard is cured but Morbius snatches the last vial before it can be put in a syringe and administered to Spidey. He flies off with Spidey in pursuit, eventually colliding with a bridge and plunging into the cold river below. From a nearby garbage scow, Spidey fires a webline to rescue Morbius but only snags the vial from Morbius' hand as it disappears below the water.
An exhausted Spidey sees no sign of Morbius. He grips the vial as he stares out over the still water, delivering words that could've only come from the pen of Stan Lee: "Things...somehow we always manage to hold on to things...while men sink, doomed around us." Conners then successfully administers the cure to Spidey. He's beaten his monstrous side, as has Conners, while Morbius was tragically consumed by his.
So...there's a Spidey saga that Raimi could really knock out the park. Sure, you'd have to re-purpose it for the Spidey movie universe with MJ instead of Gwen and you'd have to work in the Lizard's origin as well (easy enough) but you've got a storyline with a vampire, the Lizard and a six-armed Spidey all locked in mortal battle - what could be better? Raimi would have a field day with the visual elements plus there's a strong moral angle with conflicted villains - which Raimi has purposely looked to incorporate into his three Spidey films to date. Man, I'd love to see it happen. Unfortunately, I'm betting that Sony wouldn't be so keen on the idea of its hero sporting six arms throughout most of the movie. Still, I bet Raimi would really run with it if given the chance. He's already made an action movie with a monster as the hero (Darkman) - it'd be great to have him be able to do it again with an icon like Spider-Man forced to become a freak.
It's all just a pipe dream, of course - it's far too weird a turn for a blockbuster franchise - but I think it's the Spider-Man film that Raimi was born to make.
Posted by Jeff Allard at 8:12 PM

Interesting proposal, and a helluva story. And you touched on something personal for me...

I had to wait until last year's Dark Knight for my favorite Batman villain (Two-Face) to be given the proper treatment. Now, I am hoping (nay, praying) that my favorite Spidey villain, The Lizard, shows up in Spider-Man 4.

I seem to be drawn to villains with that Jekyll/Hyde thing. Not sure what that says about me, if anything...

Yeah, those issues really rocked! I know there's little chance that they'll be used for the next Spidey movie but it's a fun idea to kick around. The Lizard is a terrific villain - not my favorite Spidey villain but definitely way up there. He's one of the last classic Spidey bad guys that I'd really love to see in live-action so I hope we'll see his scaly hide in the next film.