The Magazine That BLEEDS! 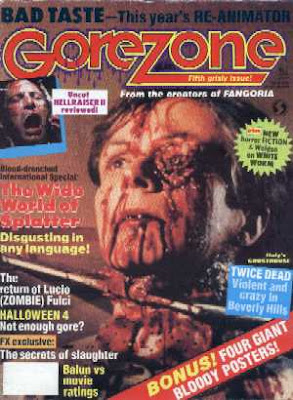 For a time in the late '80s, early '90s, FANGORIA offered its own staunchest competition in the form of its sister publication Gorezone. Gorezone closed shop after just 27 issues but it was a memorable run, with Gorezone having its own distinctive personality rather than just being a Fango clone. Now word comes from Fango's site that Gorezone is slated to make a comeback. No specifics have been given but a 2009 return date is promised.

I fondly remember Gorezone, usually preferring it over Fango. To me, it embodies my memories of the late '80s, early '90s horror scene in the same way that I can't think of the early '80s without thinking of avidly reading about the films of that time in Fango.

Right off the bat, Gorezone seemed like the horror mag for the diehard fan - as opposed to Fango which was more established by then and more mainstream friendly (not a bad quality, just that Gorezone felt like it was aimed at a more exclusive 'club'). At the time, with horror being at its most besieged by the MPAA and the religious right, Gorezone doggedly kept the spirit of splatter alive.
Most valuable in making Gorezone a magazine that mattered was the inclusion of Tim Lucas' Video Watchdog as a regular feature as well as Chas. Balun's Piece O' Mind. I'm sure a whole generation of fans first learned to appreciate world cinema and the intricacies of various cuts of films through Lucas' writing. And Balun was a self-styled critic (having gotten his start with several self-published collections of reviews like The Gore Score and the Connoisseur's Guide to Horror Films) who was to horror what music journalist Lester Bangs was to rock and roll (perhaps Gorezone could be characterized as Creem to Fango's Rolling Stone). I have to imagine that anyone who's in their thirties or late twenties who writes about horror - whether it be as a fan or a pro - was primarily inspired to do so by Balun and Lucas' examples.
The rest of what Gorezone had to offer was first rate as well. GZ offered more in the way of reviews than Fango, and contributions from Psychotronic's Michael Weldon and Broken Mirrors/Broken Minds author Maitland McDonagh (who wrote the first article I ever read about Henry: Portrait of a Serial Killer) appeared in its pages.
These days, horror is no longer the cultural scapegoat it was in Gorezone's time, having outlived its usefulness as a political tool (for now, at least). During Gorezone's run, the idea of movies as blood-soaked as The Ruins or Rambo or Punisher: War Zone earning R-ratings would've been unthinkable. Never mind the whole torture-porn fad - those films never would've seen the light of day.

Horror isn't the same beleaguered underdog that it was two decades ago. Next week, fans will be able to buy an uncut My Bloody Valentine at their nearest retail outlet and then a few days later see the - reportedly hard-R - remake on the big screen in 3-D. These aren't like the dry days for horror that Gorezone originally presided over. Back then, Gorezone was showing us all the splatter that we couldn't see on the screen or, in some cases, even in our homes.

The gore war that was raging then is over and our side won. The only question now is whether existing in today's more permissive times will make the new incarnation of Gorezone more relevant or just redundant. Time will tell on that but I have a feeling that fans will embrace the new Gorezone with no hesitation. When it comes to splatter, we have big, bleeding hearts.
Posted by Jeff Allard at 7:41 PM

I loved Gorezone. As you said, it was a more serious mag than Fango, and I loved Tim Lucas and Chas Balun's columns. Here's hoping the new version lives up to the original.

Yeah, I'm anxious to see how the new GZ shapes up. I know Chas. Balun has been ill lately but I hope they can get him to contribute something.