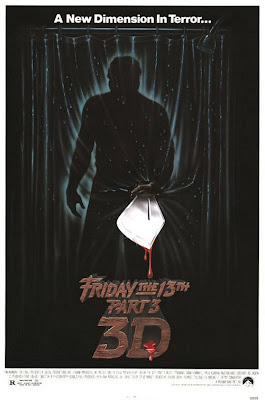 Friday the 13th Part 3 3-D was the first installment of the series where the formula started to show its limitations. What worked so well in the first two films was already starting to seem too familiar. Even though initial discussions on Part 3 involved the idea of continuing the story of Amy Steel character of Ginny from Part 2 as she dealt with her trauma in a mental institution, that new direction never took hold. Instead, a choice was made to stick to the elements that were proven to be popular with audiences. Part 3 would once again see more kids spending time at Crystal Lake and meeting inventive deaths at the hands of Jason.

With so little to differentiate Part 3 from the previous two installments, though, the Friday producers felt they had to look for a hook to draw audiences back for more of the same old, same old (notice that every subsequent Friday always incorporated some gimmick - whether it be promoted as a "Final Chapter", a "New Beginning", or a change in locale, like Jason Takes Manhattan or Jason X). Luckily for the Friday the 13th crew, 3-D was on the rise again and it seemed like the perfect match for a Friday film. I remember the incredible hoopla around this movie when it came out and in the summer of '82, it was definitely the film all the cool kids wanted to see.
This time around, the new batch of kids heading to the slaughter aren't camp counselors but just a bunch of friends looking for a weekend getaway on the rustic grounds of Higgin's Haven. You'd think that these yahoos would've had second thoughts about partying around Crystal Lake as the grisly events of Part 2 have happened just days earlier. But clearly a little mass murder isn't going to stop a bunch of fun-loving kids like these. So with everyone in the van and committed to getting trashed and/or laid, it's off to the woods with no one troubled by the events of the last film. Little do these chumps know that Jason doesn't just go to work on Friday the 13th. If you thought Friday the 13th was hard to survive, look out for Friday the 20th!
Speaking of survival, we learn an important new "don't'" in the Friday the 13th universe in Part 3. Some might find this unnecessary to be explained but when you survive an encounter with Jason, don't test your luck with a rematch. Case in point is the character of Ali (Nick Savage) - the bad-ass black biker dude who isn't going to be satisfied until Jason fucks him up permanently. I loved it when Ali first took on Jason in the barn and got beat down - sure he lost but this was the first character who really tried to get hardcore on Jason so that was something to see. But the best moment of the whole film for me is when he pops up again towards the end, distracting Jason from his attack on Final Girl Chris (Dana Kimmell). When Ali reappears ready to throw down with Jason again, it's like - "Shit, he isn't dead?". I guess that was Jason's reaction, too, because he instantly chops off Ali's right hand, like "This is what I get for only half-fucking you up before. Let me fix that." The reaction of Ali as he looks at the stump where his hand used to be is priceless. It might be this moment where Jason became a superhero of slaughter rather than just a slasher.
Of course, this is also the film where Jason found his signature look with his iconic hockey mask making its debut (RIP Shelly!). Even though we take it for granted now, at the time no one knew what a hit this look would be with fans. The Friday series fell ass-backwards into its own mythology over the course those first few films but this is where it all started to get locked down. 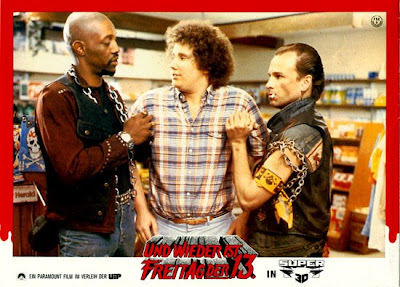 This is also the first Friday to establish the tradition of bringing in random victims outside of the core group of characters just to put up bigger numbers for Jason. If you liked the banana-eating hitchhiker in The Final Chapter, or any of the many 'walk-on' victims that have appeared in the films over the years, thank Part 3. It was with this film that the producers realized that it was always better to fill screen time with someone getting killed - no matter who it was or what part they played in the film. Hence, in Part 3 there's Harold, the luckless shop owner (played by the late Steve Susskind) and his nagging wife as well as the biker gang led by Ali who runs afoul of Jason. Screen time that in the previous films might've been spent on moments of character development with the main cast (Strip Monopoly, Marcie's 'shower dream') was now used to deliver more of the moments that audiences expected from Friday the 13th. No more listening to Bill strum his guitar, or sitting at a bar bullshitting about the legend of Jason - Part 3 changed the pace of the series. This practice of shoe-horning in more and more kills reached its apex in A New Beginning with its staggering body count of seventeen (twenty-one, if you count the death of the bogus Jason along with his son's death and two dream deaths in the pre-title sequence).
As with Part 2, director Steve Miner stages another exciting final chase here with Richard Brooker's Jason pursuing Chris over every inch of Higgins' Haven. With Jason still being portrayed as a backwoods psycho in these early films, rather than some kind of zombie, Brooker gets to display some moments of human rage during this chase - as when he throws a fit when it momentarily looks like Chris has eluded him. It's moments like these that suggested another dimension to Jason that didn't need to be realized with glasses or gimmicks.
Posted by Jeff Allard at 4:37 AM