Waiting For The Watchmen 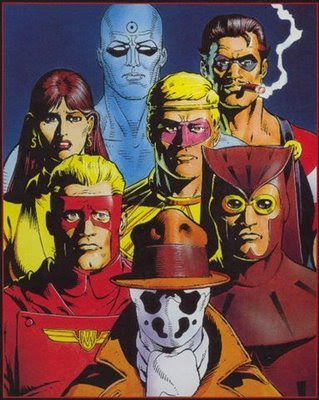 As the release date for Watchmen sits just a week away, I just realized why my anticipation for this landmark adaptation has been just a little muted - I can't quite believe that a Watchmen film actually exists. Sure I've been following its progress with a mix of curiosity and anxiousness but it still seems unreal that Watchmen has finally been made into a feature film - much less one that looks to have such fidelity to the source material.
It's been well over a decade since I last re-read Watchmen so unless I get a chance to read it again before next week, I'm sure there'll be plenty of details Synder left out that won't even register with me as missing. And that's fine with me - although I expect if this movie is as faithful as it's reported to be, every frame will bring back a flood of memories, jarring my recollections of the book as it goes along.
I first read Watchmen in monthly installments when it was released in '86. Even though I was a high school senior then, I still think the series was just a little over my head at times - or maybe it was just such a different experience than anything else I had found in comics up to that point. Even the way it was packaged was dramatically different in which each cover was a detail from within the issue (a trophy, a Rorschach blot, etc.) and not the traditional style of comic book cover that emphasized action or character.
When I finished reading issue #12, I didn't think of the series in terms of it being a masterpiece or a classic - I just knew that I had loved the story and that it had gripped me straight through the year-plus change that it took to be released. I certainly didn't expect that nothing else in comics would ever come close to it - which is probably the saddest part of Watchmen's legacy, that it stands alone in the history of the medium. Many wonderful comics have come along since, some of them classics in their own right (everything from Sandman to Y: The Last Man to Alias to Preacher), but none of them have been the singular achievement that Watchmen is.
Even though I'm extremely excited to see the film, I agree with writer Alan Moore's unhappy assertion that Watchmen is so specific to the comic book form (thanks to such artistic choices as reserving the use of splash pages until the final issue to reveal the dramatic destruction of Manhattan) that to take it out of its home medium is taking a large part of its impact with it. On the other hand, as director Zack Synder has pointed out, mainstream movie audiences have become fluent in the tropes of superhero fiction in a way they weren't twenty years ago thanks to the popularity of superhero movies so that a Watchmen film can more readily comment on the genre in a way now that it couldn't when Watchmen the book was first released. Had this been made in the late '80s, as initially planned, with Sam Hamm writing and Terry Gilliam directing, it would've been a nightmare. There would have no confidence that audiences would be able to keep up with the material without making drastic changes to get mainstream viewers up to speed.
Speaking to Comics Interview in issue #70 about the then pending release of Batman, Sam Hamm discussed the challenges of adapting Watchmen, saying "...I couldn't see how anyone could turn it into a movie because 1) there's too much sprawl in the story, too much time shifting and flashbacks, and 2) there's too much expositional material to get across." Hamm also said of his resulting screenplay (which jettisoned the beginning of the book, its ending and the entire history of the Minutemen, keeping only the present-day characters) that "I feel like what I came in to do was essentially the writerly equivalent of what Kodak used to do, take elegant technology and dumb it down for mass consumption." I've never read Hamm's screenplay (or if I have, I've long since forgotten it) but remarks like that illuminate how much things have opened up in mainstream culture for even the most geek-centric material. To make Watchmen the way that Synder has approached it would've been an impossible sell twenty years ago - it would've been unpalatable for a wider audience - now it seems inevitable that this is the way it had to be made, if it were to be made at all.
I've only skimmed a few reviews so far and at this point I'll hold off on looking any further into other's opinions until I've seen the film for myself. Even if I walk away feeling that Synder got Watchmen 90% right, I'll consider it to be some kind of triumph. It doesn't have to be 100%. In the end it really can't be - that's what the comic is for.
Posted by Jeff Allard at 9:39 AM

Just saw this Tuesday night. Hopefully I'll have a full review posted tomorrow on my Myspace blog. In the meantime, I'll just say I think Snyder did a good job at translating an incredibly complex work from one medium to another. It's not perfect, but I was reasonably happy with it.