After fandom let out a collective "Nooooo!!" at the notion of a replacement Jason in A New Beginning, the task fell to the filmmakers of Friday the 13th Part VI to restore Jason to the ranks of horror's heavyweights. Writer/director Tom McLoughlin had already established himself as someone with an affinity for fright with his 1983 film One Dark Night, a supernatural shocker about a group of college kids fending off zombies in a mausoleum. But did he have the chops to bring Jason back in style? While the simple answer is "yes", my enthusiasm for this film has always been a little muted. On the one hand, Jason Lives is the slickest, most accomplished film of the original Paramount Fridays (and, really, it outclasses the New Line efforts to date as well - not counting the remake). The pacing is great, with a story that hits the ground running and never pauses for downtime (this was the shortest Friday at the time, clocking in at 86 minutes), the cast is even more attractive than usual (hello, Jennifer Cooke!) and on the whole they show more across the board talent (including an affinity for comedy) than previous Friday thespians. Against all expectations, McLoughlin beat the odds and made the sixth Friday the 13th into a respectable movie.

But honestly, how fun is that?

While I concede that there's a lot to admire about Jason Lives, and I do enjoy it, I've always considered it a little too sanitized for my taste - it's almost the Disney version of a Friday the 13th film (no drugs! no nudity! What the fuck?). The humor is less smart than it is 'cute' (like when a young camper is seen reading Sartre's No Exit) and I'm just not the biggest fan of cute - especially when it involves my favorite slaughter series. Everything's kind of a wink and an elbow to the ribs here (like when the cemetery groundskeeper looks into the camera and says "some people sure got a strange idea of entertainment") and that aspect to Jason Lives has always rubbed me the wrong way.

But as far as getting Jason back on his feet, Jason Lives does get the job done. The pre-title sequence here in which Jason is revived by a bolt of lightening is one of the best of the series and it's a scene so good, the rest of the film has a hard time living up to it. On the whole, McLoughlin makes a good effort with the film rocketing from scene to scene with Tommy Jarvis on a mission to end Jason's rampage. I really like the use of Tommy here, the fact that he's responsible for bringing Jason back to life and that he has to become this action hero to take on Jason. This film has a momentum to it that no other Friday has (even the dialogue is fast-paced). It's no wonder that many fans regard it as their favorite of the series. 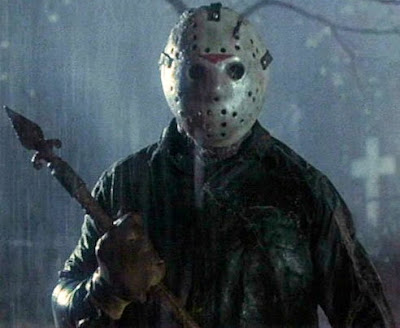 As the film that had to bring Jason back from the dead come hell or high water (the mandate from fans - no more scrubs!), the game changing element of Jason Lives is that it officially turned Jason into a supernatural being. Up until Jason Lives, the series had always kept one foot in the real world. Sure Jason kept coming back from a lot of physical harm but never so much that an explanation was needed - the guy was just a tough fuck to kill. Here, though, Jason is unequivocally dead. He's in the ground with a face full of maggots. Coming back from that isn't as simple as brushing off an axe blow to the head. McLoughlin's solution to give Jason a monster movie-style resurrection is fine, it works, but at the same time the series could never be the same after that. Jason as a murdering backwoods cretin was scary; Jason as a lightening-charged super zombie - not so much.

But as lightening-charged super zombies go, however, Jason makes a pretty good one - getting off to a great start by ripping out the heart of one-time Horshack Ron Palillo. C.J. Graham proves to be one of the better Jasons and his lean and mean style fits right in with McLoughlin's film. His Jason is a lot more hands-on with victims than past Jasons with his approach being less about weapons and power tools and more about applying brute strength (as in the film's best kill, the famous back-breaking death of Sheriff Garris). Very little blood is shed during Jason Lives, though, and this is the most splatter-lite Friday of them all. Clean-cut and eager to please, this was the late '80s pop metal arena rocker version of Jason as opposed to the hardcore headbanger that he used to be. It was kind of like seeing Van Halen become the much more vanilla 'Van Haggar' but for what it was, it worked. It's just a shame that filmmakers with the same skill and the same knack for fun as McLoughlin didn't carry on the franchise after Jason Lives, the last good Friday of the '80s.

I remember seeing this in the theater as a teenager with a gaggle of my friends, male and female. We smuggled in Arby's (how the smell didn't tip off the ushers, I have no idea). I remember it being a fun movie to see as a group, but looking back...yeah, it was pretty bloodless, Horschack's de-hearting aside.

It's funny you mentioned pop metal and headbanging at the end...when Jason stands atop the flipped-over, on-fire RV (which got applause and whistles in my theater), my friends and I agreed it looked like the perfect heavy metal album cover.

Yeah, I have fond memories of seeing this in the theater as well with an enthusiastic crowd chanting for Jason's return. As for the horror/metal connection, it seemed like as the '80s went on the two went hand in hand. If you were into one, you were usually into the other.

You're assessment of the film is about right, but I can't help but have a soft spot in my heart for this one since it was the first 'Friday' I saw in a theater. It is a shame the gore was toned down, but I think the MPAA was cracking down on horror pretty hard around that time.

I think every Friday fan tends to favor the one they saw first. It's something you just can't help. I think Jason Lives is a really strong movie overall - it's just a little too wholesome for me to actually love.