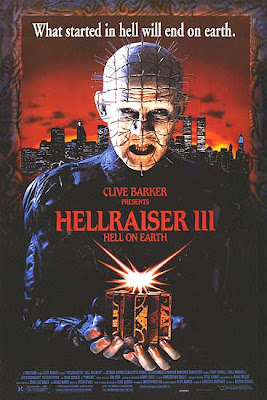 Now that horror franchises are an even bigger deal than ever with series like Halloween and Friday the 13th drawing massive crowds and smashing box office records, I can't help but look back fondly on the days of the late '80s, early '90s when no one made horror sequels for anyone but the diehard fans. More often than not, they may have been making them badly but I liked the fact that films like Hellraiser III: Hell On Earth or Freddy's Dead: The Final Nightmare weren't made for anyone but the same group of gullible gorehounds who would turn out opening weekend to support any horror movie.
In reality, it was a lousy time for the genre but what I miss is the feeling that when you went to a horror movie back then, you were part of a loyal club who still cared about these films long after the horror boom of the '80s had faded out. You had to put up with the fact that the new films were invariably disappointing but your affection for the genre kept you coming back, hoping for a break. To an extent, that ratio of crap to quality is how it still is but at least horror is a thriving business these days whereas it often seemed in danger of extinction during the early '90s. The amount of genre films that have already hit theaters in just the first two months of '09 would've constituted an incredible windfall for an entire year in the early '90s when horror was at such a low ebb that you looked forward to a Freddy or Chucky film just because, well, at least it was something to see on the big screen. Lousy or not, these movies gave horror-starved fans something to check out and when a movie was halfway decent, like Hellraiser III, you could definitely take that as a win.

Today, horror fans scoff at this third Hellraiser film and, really, they scoffed at it plenty during its 1993 release but while this did mark the downturn of the franchise, it's notable as the most lavishly budgeted Hellraiser to date (while still being low budget), lending this entry a bigger 'Hollywood' feel than any other entry in the series.

Directed by Anthony Hickox, who had already made a minor name for himself in horror circles thanks to the flawed but entertaining likes of Waxwork and Sundown: The Vampire in Retreat, Hellraiser III was his biggest movie to date. There was a lot of worry at the time that - given the tongue-in-cheek tone of his previous films - that Hickox wouldn't be able to carry on the atmosphere established in the first two Hellraisers by Clive Barker and Tony Randel. Ultimately that turned out to be true - even with Hellbound: Hellraiser II writer Peter Atkins returning to pen the Hell On Earth screenplay - but this still ranked as Hickox's most serious outing to date. Next to Waxwork and Sundown, at least, this was pretty bad-ass. Hickox went for a more commercial tone, though, delivering large scale action, snazzy (and then still-novel) morphing FX, and a few one-liners (some even coming from Cenobites themselves). It's all very goofy but yet because he seems to be having fun with the material rather than just making a mockery out of it, Hickox makes it work.
This was also the first Hellraiser to really exploit Pinhead's status as a horror superstar. Whereas in the first film he had just been the Lead Cenobite and in the second film they tried to humanize Pinhead and make Dr. Channard into the main villain, in Hell On Earth, it's finally Pinhead's movie all the way (this is also the first Hellraiser where the character is actually referred to as Pinhead in the movie itself). This remains Doug Bradley's best showcase in the role, with more dialogue and screentime than in any other Hellraiser. Sure, Pinhead is so long-winded he makes Freddy Krueger look like Teller of Penn & Teller but if you've got to have a brimstone boogeyman who'll talk your ear off, be glad it's Bradley who's charged with delivering lines like "There is a secret song at the center of the world, Joey, and its sound is like razors through flesh!"
In tandem with Pinhead's promotion to scenery-chewing arch-villain, more than any of the Hellraisers before or since, Hellraiser III embraces a comic book sensibility. The new Cenobites trade in the nightmarishness of their predecessors for super power-like capabilities such as a DJ being transformed into a Cenobite able to hurl deadly CD's that slice their victims and a TV cameraman fused with his camera, using the extending lens embedded in his eye to penetrate people's skulls (of course they give this character one-liners like "Ready for your close-up?" and "That's a wrap!"). These are villains straight out of a comic and like any good gang of comic book villains, they go on a climatic rampage in the middle of the city with the police doing their best to slow them down. This is the Superman II moment for Hellraiser III. It's General Zod and his gang trashing downtown Metropolis. How you feel about Hellraiser III I guess comes down to how you feel about this scene. It'll either strike you as being ridiculous and you'll love it or it'll strike you as ridiculous and you'll hate it. I'm in the former camp, clearly. I just love seeing these Rent-A-Cenobites striding down the middle of a street like the winners of a Hellraiser Idol contest, using their gimmicky weapons to cause mayhem. I guarantee that if the Hellraiser franchise gets up and running again that a scene like this will never appear in any future installments. Even if the new movies are bad, they'll be bad in the boring way that movies tend to be bad these days in which they suck but they suck in a very grim, humorless way. If I've got to watch a bad Hellraiser movie, I'd rather it be one where a CD Head Cenobite is running loose in the streets.
I happily saw this twice in the theater, for all the reasons listed above. Plus, I've got to credit Hickox for casting Terry Farrell as investigative reporter Joey Summerskill. Great horror heroines are hard to find but Hickox found a winner with Farrell (and a bonus shout-out to co-star Paula Marshall, another favorite of mine who Hickox went on to cast in Warlock: The Armageddon and Full Eclipse). For me, Farrell is the Amy Steel of the Hellraiser series. Farrell went on to find even greater geek fame as a cast member of Star Trek: Deep Space Nine but I didn't care for seeing her with leopard spots on her temples or whatever they had going on there so it's always been about Hellraiser for me. I kept hoping for her to return to horror but so far it hasn't happened. At least Hickox himself is back in genre territory with the psychological thriller Knife Edge, due sometime this year. I expect that it might not be the best movie, but I'm looking forward to it nonetheless. After all, the bonds forged in Hell aren't easily forgotten.
Posted by Jeff Allard at 6:22 AM

III is the one were the series went off the rails for me... stopped being scary or creepy and just settled for goofy.
I didn't enjoy another in the series until 'Inferno'.

I've completely lost track of the Hellraiser series at this point. Inferno is the last one that I saw and I thought it was ok except for the fact that it felt like an unrelated script that was rewritten to shoehorn Pinhead in.

I loved the idea for Bloodline and wish that Kevin Yagher had been able to push his cut through. It still might've been a flawed film - maybe even a complete mess - but at least it would've been more true to what he intended. As is, I still think the movie has a lot to recommend it.

As for Hell on Earth, no argument here that it caused the series to lose its way but I can't help finding it enjoyable.

I'll be checking this out soon. I'm currently viewing Hellraiser: Bloodline. An Alan Smithee film (!)but so far quite enjoyable. In a not-really-enjoyable sort of way. If you know what I mean.

As far as 'Alan Smithee' films go, Bloodline is one of the better ones (for whatever that's worth!). I thought the idea of having it as a sort of anthology set in the past, present, and future was great but like a lot of films, the concept was better than the execution.

I liked Hellraiser III, it's fun. The guy who owns the club used to be on General Hospital and since I'm loyal to my soap actors, I was pleased to see him in this. I LOVE the scene where the statue rips off the girl's skin. She's just kind of put out by it. I mean, it should have been so freaky!

It's a fun movie. Maybe not as scary as the first two, but certainly watchable.

I loved Inferno and I agree with Jeff that it seemed like Pinhead was just kind thrown in there to make it a Hellraiser movie, but it's quite effective.