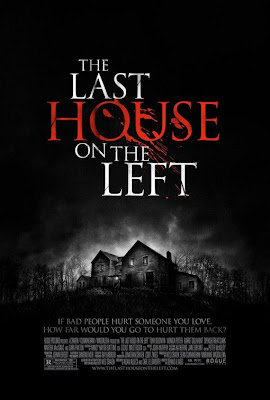 There's something undeniably odd in seeing the most notorious horror films of the '70s - films that were once controversial staples of drive-ins and grindhouse theaters - brought back decades later as slick entertainment for the multiplexes. It's difficult for horror to be transgressive when films that were once examples of entertainment going beyond the pale are now regarded as venerable brands to be exploited and I belive Last House on the Left is hands-down the strangest choice of a remake so far. Dawn of the Dead, The Hills Have Eyes, Texas Chainsaw Massacre, Halloween...while I questioned the wisdom in trying to give any of these films a contemporary make-over, at least I could understand the commercial potential in each case. If you want to immediately have an audience for your zombie film, your slasher film, or your survivalist horror film...those titles are the ones you'd want to go after. Last House, however, is such an ugly tale that I have to wonder why Wes Craven and his fellow producers thought that the world was clamoring to see an updated tale of rape and revenge with better production values. You know, was this really the kind of thrill ride that was worth recreating? It was a milestone for its time, yes, but does the audience of 2009 need their own version? Based on the new film and its initial box office reception, I guess the answer is 'kind of'.

I'll be explictly discussing the ending of this film later in this review so if that's something you care to avoid, you should stop reading after this paragraph. The short answer for me on Last House '09 is that it was generally about as good as a remake of Craven's classic could be. It doesn't do much to try and improve on what Craven and Sean Cunningham did (except for making the film's tone more consistent - there's no moments of awkward comic relief here), it just tells the same age-old story with minor alterations (courtesy of writer Carl Ellsworth). A pair of girls still run afoul of heinous criminals, they're still cruelly violated, and although one girl lives through this ordeal where her character did not in the '72 version, the gang of dirtbags still unknowingly seek refuge in the household of the girl's parents and by the end of the night, the truth of their deeds is out and a vicious payback is served. It's a storyline that's hard to fuck up as long as it's played with conviction and director Dennis Iliadis and his cast don't disappoint on that count.

Among the cast of Last House '09, Garret Dillahunt is a real standout as the despicable Krug. The original film's David Hess left a lasting impression as a scumbag for the ages but Dillahunt is a memorable Krug in his own right. All the performances here are strong and this is easily the best ensemble cast for a horror film in some time - definitely since Frank Darabont's adaptation of The Mist (2007). As the daughter who survives Krug and co.'s abuse, Sara Paxton is very good, showing a sense of resiliency even when she's been as degraded by her attackers as she can get. There's been some consternation in fan circles about having this character live but I think for the purposes of this film it works and the dramatic way that Monica Potter and Tony Goldwyn play their reactions to their daughter's condition and their urgent need not just to avenge her violation but to protect her from further harm and safely get her medical attention adds a layer of drama and suspense missing from the original.
As a director, Iliadis goes in the opposite direction of Craven's raw approach. This is a much more polished production - befitting its $10 million budget - and I think that was a wise move. It'd be disingenuous to try and purposely recreate the grainy, guerrilla filmmaking vibe of the first film. In tandem with cinematographer Sharone Meir, Iliadis creates many strikingly pretty moments amid the nasty events that unfold. But when the violence comes in, it's full-on.
My main complaint with the new Last House as it moves into its second half and the gang of criminals receive their comeuppance one-by-one is that I thought there could've been more thought into how these characters are dispatched. I missed the sense of planning and preparation that went into the parent's revenge in the original film. Here, it just seems like a lot a flailing around as the parents get into prolonged struggles with the individual gang members and that isn't as impactful as seeing the parents showing some cunning. I also think that an opportunity to make this film more troubling and morally complicated was forfeited. The presence of Krug's teenaged son Justin (Spencer Treat Clark) offered a chance to have a character who wasn't evil and who committed no crime himself have to suffer for his inaction. Although Justin never does anything to harm Mari or her friend Paige (Martha MacIsaac), I thought it would've been dramatic to have him be included in the parent's retribution - that the parents are so enraged to know that this character did nothing to intervene while their daughter was being raped (and while her friend was killed) that this would be enough to make them unload on him. To kill Justin in cold blood would be something that the Collingwood's would surely instantly regret, but it would be an act that was committed out of pure anger and instinct - just a gut impulse to cleanse the world of everyone who was involved in what was done to their daughter. I believe that should've been the last scene, rather than the microwave kill which is prominently featured in the film's ads (not that I don't appreciate a film closing on a shot of a head exploding!). To see Emma Collingwood suddenly shoot Justin point blank just as the audience thinks the movie's over as the surviving characters are all on their way to safety wouldn't be an act of revenge that everyone in the audience would agree on (and it might even be one that the father would've been surprised by) but I think that's an element this film needed - some moral ambiguity and a chance to question how far the audience believes these parents are allowed to go. It would've allowed the ending of the film to resonate, rather than just go out on a crowd-pleasing moment.
As is, this is well acted, well directed, but uncomplicated - making the parent's revenge out to be unambiguously gratifying. For what it is, though, it's good. I'm not sure who I'd recommend it to but if you have to see one movie this year where a young girl suffers a prolonged rape and the people responsible for this crime are made to pay the ultimate price for it, then Last House on the Left is second to none.
Posted by Jeff Allard at 7:35 PM

Ok, gotta disagree with your idea for an ending there. While I didn't think the microwave scene was needed, it didn't bug me as much as it did others. I can see the dad snapping at that point and doing something totally whacked out.

But killing Justin? No way. THAT would have been too much for me. He freakin' handed the gun TO the dad to let him kill his own father. He helped them out, in the end, and was a victim of his sadist, cruel father as well.

Killing him would have made the parents as bad as the bad guys.

Yeah, I guess that would be the reaction I would've wanted the movie to have - to show that the parents could go too far themselves. Killing a character who arguably didn't deserve to be punished would've made the movie more worthy of debate. As is, there's not much in Last House to discuss.

I'm in complete agreement with you on this one. I liked the remake, but it definitely did lose the moral ambiguity of the original. In Craven's 'Last House', the parents are basically forced to sink to the level of Krug, and there's no sense of catharsis or heroism to what they do. Here, there's never any question that the parents are doing the right thing, and are "better" than the killers. And yet I think this version works for the mainstream multiplex audience it was intended for.

I do think something more needed to be there in the ending, though. As much as I like your idea, it would have been commercial suicide. But playing up the redemptive side of the parents taking Justin in would have given the film a certain kind of moral stance, too, and one that would work in a mainstream film. Instead we just get the ridiculous microwave scene, which to me felt completely out of place.

The microwave scene is just nuts. As an old-school gorehound, it made me chuckle (it's funny how somehwere along the way, the MPAA apparently gave up on censoring splatter!) but I think audiences should leave a movie like Last House on the Left feeling wiped out, drained, and not quite sure what they just put themselves through - not high-fiving each other. As you say, though, this is more orientated towards the mainstream, multiplex audience and on those terms it works just fine. I just wish that it had tried to be as provocative as the original - or provocative at all, really. Still, I have to acknowledge that this remake could've ended up being far, far worse.

I can't say I hated this movie, but it's definitely not a horror film. My friend who I went with kept calling it a thriller and I agree. It lost any horrific edge the original had. You know you're watching a movie and it's easy to remove yourself from the situation. The tag line "Keep repeating... it's only a movie," just doesn't work here.

I though except for Paxton, the females were all pretty bad. This movie was all about the male actors and Goldwyn and the kid who played Krug's son were incredible.

I'm just sick of "Hollywood-izations." Before I even saw this movie I knew exactly what they would change to make it more "PC" and frankly, that sucks. I remember when a (horror) movie was supposed to unpredictable. I guess I'm just old.

And I thought the microwave scene was lame. I mean, what are they going to tell the cops? It's like they could defend almost anything they did... except that.

This movie is watchable, but has no heart and inevitably, like so many "re-imaginings" will most likely be forgotten in 10 years anyway...

Amanda, I agree that this isn't the morally messy film that the original was and it's a much lesser film for it. For what it is - a straight-forward revenge thriller - this gets the job done well enough. But as you say, there's little about it that's memorable. It's only been a couple of weeks since I saw it and it's already out of my mind.