The Haunting In Connecticut 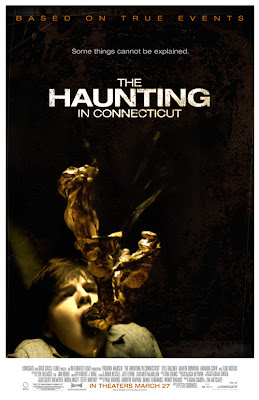 The phrase 'based on true events' has been so overused in the name of hyping horror movies for so long now that I believe it needs to be permanently banned. And what's really galling is that few, if any, of these films are ever actually based on true events. I mean, there might be a germ of truth in there (as with Texas Chainsaw Massacre) but to these jaded, unbelieving eyes, when the claim 'based on true events' is used in conjunction with a tale of the supernatural, it shouldn't be taken as anything but a fabrication. People can tell all the stories they want about how ghosts chased them out of their house but I can't buy it as real. However, as a movie-goer, my skepticism doesn't prevent me from enjoying a good haunted house yarn. In fact, sometimes I even kind of like the lousy ones, like The Haunting in Connecticut.

Directed by Peter Cornwell (his first feature), The Haunting in Connecticut purports to be the real-life tale of, well, something involving ghosts. When a family starts renting a house in Connecticut in order to be closer to the hospital where their oldest son's cancer treatments are being administered, it isn't long before they realize - in true haunted house movie fashion - why the rent was so cheap on this property. As it happens, long ago this house was once a funeral home. Not just that, but seances were held there as well. If ever a house was likely to be haunted, it's this.
At first it's only Matt, the sick teen (Kyle Gallner), that witnesses the apparitions that populate his family's new home, and it's suggested that it's his treatments that are leading to vivid hallucinations. But pretty soon even the non-cancer patients in the house are in on the fun, too. Outside of his mother Sara (Virginia Madsen), though, the other residents of the house are on the forgettable side. They're so forgettable, in fact, that they may slip from your mind even while you're looking at them. For the record, the rest of the haunted clan are Martin Donovan as Peter Campbell, the overworked dad who may or may not be tempted to fall off the wagon; Amanda Crews as Wendy, the Campbell's teenaged niece, and Sophi Knight and Ty Wood as Mary and Billy Campbell, Matt's younger siblings. Even though this may reflect the make-up of the real family in question, for the purposes of the film, it makes the story feel overloaded with undistinguished characters who have no real function to the plot other than to stand around. Even Matt's fellow cancer patient, Reverend Popescu (Elias Koteas), who eventually gets roped in to put the restless spirits to bed doesn't really serve the story as much as he might initially appear to.
In Haunting's favor, Cornwell has enough of a feel for horror to create a mood of menace that offsets the clunkiness of the screenplay by Tim Metcalfe and Adam Simon. The cinematography of Adam Swica and production design by Alicia Keywan are ace contributions to the film and Haunting avoids the slickness of most modern horror without purposely affecting a retro look. For older horror fans, raised on '70s fear fare, the muted, washed-out frames of this film will feel a lot like, well, home.
Fans will also feel right at home with all the cliches included in the screenplay. Even casual horror fans will easily spot influences ranging from The Amityville Horror to Poltergeist to The Exorcist, among others. But what The Haunting in Connecticut lacks in originality or surprises, it makes up for in, well, it really doesn't make up for much (it has some great ghouls walking around, though, with blank eyes and writing inscribed on their ashen skin). But yet even though I wasn't that enthusiastic about The Haunting in Connecticut, I didn't mind this movie. One specific thing that endeared it to me is that this is the rare horror movie to feature a middle-to-lower class family. Horror used to be a genre that, as a rule, would align itself with the working class, blue-collar audience. In recent years, that's changed drastically.
I first noticed this with the 2006 remake of When A Stranger Calls in which instead of being set in a common suburban neighborhood, the new film took place in a remote home that few people outside of Bill Gates could possibly afford. Too many American horror films lately are set in homes of enormous wealth and I think that's an alienating trend. I don't know about you, but most of the people I know live pretty modestly - even the home owners I know don't live in anything close to being described as palatial. And judging by the economy, I think it's safe to say that most people are in the same boat. The characters in films like The Haunting of Molly Hartley, The Unborn, The Uninvited, and The Last House on the Left, however, all seem to be living awfully prosperous lives. Even the recent Friday the 13th remake had one of its characters putting his buddies up for the weekend at his rich family's pad. And the upcoming killer kid flick Orphan features a family living in an impossibly gorgeous home as well. It's become a real distraction to me so I appreciated seeing a more financially strapped American family represented in The Haunting in Connecticut. Obviously big, lavish homes are more cinematic to look at but what happened to the days of Halloween, Poltergeist, or A Nightmare on Elm Street where the characters in horror movies could be seen in homes and neighborhoods that looked like the ones you were familiar with? Horror ideally should hit us where we live, not be a window into a world that's out of our reach.

Maybe that's the saving grace of The Haunting in Connecticut being based on a 'true' story - even with its supernatural baggage, it can't run too far from reality.
Posted by Jeff Allard at 4:11 AM

I thought the movie looked decent and sounds like it is based off of your review here. It does look like a ton of other almost faceless horror films that have come out over recent years, the kind of movies one might want to avoid to say the least. But that doesn't ALWAYS mean they aren't sometimes good and worth giving a watch. If we avoided every movie that looks like this, than we could miss out on something enjoyable to a certain extent.

Yeah, this is just a time-waster. Better than some, worse than others. If you're in an undiscriminating mood, it's fine.

In an essay (from Danse Macbre) by Stephen King on the first movie of the Amityville Horror (1979) notices that one of the things the dad is worried about is money & losing the house which was a bargain by the way. A mixing up supernatural horror with the economic horror.

I remember King mentioning that about Amityville and that's definitely a chord that Haunting in CT strikes, too. Seeing the family affected by financial stress grounds the movie in everyday matters and it adds another layer of anxiety to what's going on.

I had to turn off my logical, hard-core skeptic side (ectoplasm emanating from various orifices? Harry Houdini exposed that particular trick ages ago). Once I did, I actually had a pretty good time with this one. There's some creepy imagery, some decent scares, and the performances are strong. The script not so much, but what the hell. I had fun.

Yeah, like I said in the blog - I'm not one to regard this kind of nonsense as real. But as a ghost movie, this had its merits.