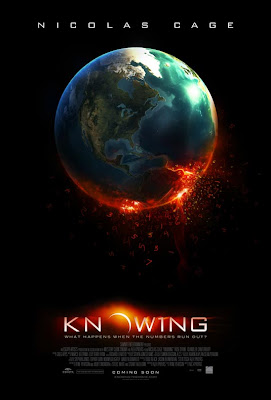 Director Alex Proyas' latest genre foray doesn't follow the usual math, displaying an appreciable non-conformist streak. Maybe what's most unusual about Knowing is that Proyas affords his outlandish premise such serious consideration. There's no attempt to use irony to acknowledge or deflect the ludicrousness of the material. If anything, there's a real message that Proyas is preaching here. Whether you agree with that message or not is irrelevant - the fact that it evidences a point of view separates Knowing from what, say, Michael Bay might've done with this same story. Knowing feels personal in a way that big budget genre pieces seldom do.
The story that Knowing offers, passed through a succession of screenwriters and finally rewritten by the team of Stiles White and Juliet Snowden, is an equation for the End Times. When a time capsule filled with the drawings of elementary school children in the '50s is unearthed today, one entry falls into the hands of young Caleb Koestler (Chandler Canterbury), son to John Koestler (Nicholas Cage), a MIT professor and Astrophysicist. Unlike all the other capsule entries, which are all drawings, this one is a series of seemingly unrelated numbers. When John believes that he's divined a startling purpose to these numbers, the movie becomes a race against time to stop the disastrous events that they predict.
Along the way, Proyas puts Cage's character in the middle of two spectacular disasters that, even with his foreknowledge, he can't avert. Most notable of the two being an airplane crashing on a crowded highway that's stunningly staged by Proyas and, in its fiery aftermath, belies Knowing's PG-13 rating. For a modern science fiction film, though, Knowing is far from being heavy on action or special effects and when such elements are employed here they don't seem there to spike the audiences' attention - they just seem there because the story demanded it. While Knowing is a visually stunning movie, Proyas doesn't go for cool shots that only serve to distract - he takes an assured, straight-forward approach that is unfashionable today. Even most dramas have more jittery camerawork than this does. Knowing seems cut from a cloth of an earlier age of filmmaking (even down to the wonderful score by Marco Beltrami, which harkens back to Bernard Herrmann).
In the later half of Knowing, as events escalate, the overriding question is as much how to accept the inevitable as to how to avert it. Do we choose our time or is the end already an immutable event? Is everything that happens in the universe part of an intelligent design or is it random occurrence? The threat of doomsday always looms in genre films - from The Day The Earth Stood Still (1951) to Armageddon (1998) - but no matter how dire the situation is, no matter how huge a rock is headed through space to pummel us, most are quick to end on the up note that our cards came up lucky and the Earth is safe again for another day. More brazen films, like Miracle Mile (1988) and The Rapture (1991) give their protagonists no recourse - except in their ideologies and in their dying dreams.
The beliefs in regards to our purpose on this planet and our place in the cosmic order that Knowing expresses are not universally shared - what beliefs are? - but even though they don't jibe with my personal philosophies, I appreciated the earnest presentation that Proyas gives them. Some might find the conclusion of Knowing too corny for words but putting my cynicism aside, I thought it was satisfying and true to itself. I think it's also true that any other resolution wouldn't have gone through in a movie of this size (reported budget: $50 million). But what some might perceive as a compromise feels like a genuine nod to spirituality to me. The epiphanies of the final stretch of Knowing would be come across as unbearable if they weren't played with the proper sincerity - and Proyas is successful in making a film with a certain set of convictions that is able to bear the merits of speculative entertainment rather than propoganda.
I don't know what kind of audience Knowing will find but I think it's a genre film worth attention and a confirmation of Proyas as director who possesses his own uncommon knowledge of how to avoid artistic catastrophes.
Posted by Jeff Allard at 4:15 AM

This is one of the few times I really disagree with you. I just found this movie ridiculous, and not just because of Cage going over the top again. I just didn't feel like the movie had anything to say about the end of the world, other than some vague "the children are our future" message. Maybe I missed the point, but this movie just didn't do it for me.

To be honest, this might be a case of me being mush-headed. Knowing definitely worked for me but maybe I was just in the right mood for it.