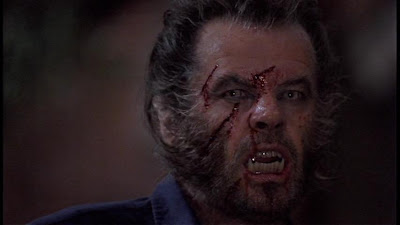 If casting Jack Nicholson as the madcap Joker in Tim Burton's Batman (1989) had seemed like a no-brainer, then the notion of casting him as a werewolf in director Mike Nichols' Wolf (1994) seemed like another commercial slam-dunk. But whereas the actor's indulgent, hammy turn as the Clown Prince of Crime (a performance that proved that even an over-the-top role can be played too over-the-top) led many skeptics to believe that Wolf would be another occasion for scene-stealing mugging on Nicholson's part, it turned out to be a restrained, even melancholy, outing. Rather than a horror comedy, or even a straight horror movie, Wolf was more of a drama about one man's midlife crisis fused with lycanthrope lore.

Nicholson stars as Will Randall, a managing editor at a New York publishing house in the midst of a corporate takeover. While Will feels confident that his young protege Stewart Swinton has his back amid the inevitable changes to come, he tragically fails to notice that his underling is played by notorious arch-weasel James Spader. Accordingly, Stewart has been secretly maneuvering to steal Will's job. When the publishing house's new owner Raymond Alden (Christopher Plummer) leaves Will the choice between a humiliating demotion or the prospect of being middle-aged and jobless, Will finds himself at a personal low - until things get worse when he discovers that Stewart has also been screwing his wife (Kate Nelligan) on the side.
Luckily for the newly single Will, not only does he find himself in the unlikely company of Alden's gorgeous daughter, Laura (Michelle Pfeiffer) but the bite he received from a wolf on a Vermont back road in the film's opening scene has turned out to have some unexpected side benefits. Will finds that he no longer needs his reading glasses, and that he now has heightened senses of smell and hearing that Matt Murdock would envy. In turn, he rediscovers a competitive edge at work, launching an aggressive counter-attack against Stewart's machinations (making this the only werewolf movie to occupy itself with corporate gamesmanship). In these early phases, Will's metamorphosis seems to be a positive one (much like Jeff Goldblum's transformation in 1988's The Fly initially seems positive) - even if he has a hard time wrapping his head around the absurd idea that he's actually becoming a werewolf. Will's new super-senses prove to come at a dramatic price, though, as he discovers to his horror that werewolves are justly known for their wild side. 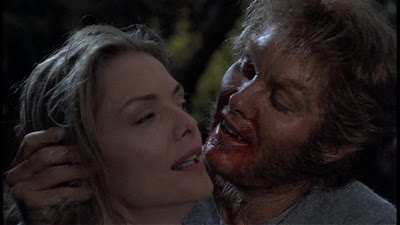 Not nearly as tormented by turning into a werewolf is Will's scheming protege. After Will instinctively takes a bite out of Stewart after he puts an ill-considered hand on Will's shoulder, their competition goes beyond vying for a job. Stewart is understandably mystified by what's happening to him but he is not at all unhappy about it. Finally he can act on his every shitty impulse - he can even be the straight-up killer he would've been too afraid to be before.

The climatic, fur-a-flying face-off between Nicholson and Spader is the most commonly criticized aspect of Wolf but while it does reduce the movie's central conflict to a comic book-style battle, I've always liked it just fine. Since life became a pissing contest between them (and Will does, literally, piss on Stewart's foot at one point), this is what these characters in their animal hearts have really wanted to do to each other. No more office politics, no more deals, no more maneuvering - just a one-on-one, no-bullshit fight to the death. 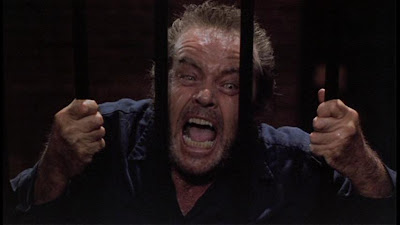 The legendary Rick Baker did the make-up honors on Wolf but while horror fans were eager to see how the genius behind the groundbreaking transformation of An American Werewolf in London (1981) would try to top himself, it turned out that Baker wasn't necessarily looking to take his game to the next level. He did a fine job but, as dictated by the material and by Nichols' choices as a director, Baker's work here is more akin to Werewolf of London (1935) than to An American Werewolf In London. There's no big transformation and as werewolves, Nicholson and Spader just look like guys with fake teeth and fur glued onto their faces. In the end, that might've been the biggest misstep of this project - from a commercial standpoint, at least. Baker had famously set the bar but instead of setting the bar again, Wolf was a werewolf movie that acted as though An American Werewolf in London (or Rob Bottin's exceptional work in The Howling) had never existed. Even Silver Bullet (1985) had tried harder to be competitive in this regard.

As part of the mini-revival of Gothic horror of the early '90s, Wolf was seen as a base hit rather than a home run. After the commercial success of Bram Stoker's Dracula in 1992, over the next few years Columbia went on to produce Mary Shelley's Frankenstein (1994), Wolf, and the Jekyll and Hyde tale Mary Reilly (1996). None caught fire at the box office like Dracula had, though, and the classic monsters were temporarily shelved again (it's telling that when Universal revived The Mummy in 1999 that they went with Stephen Sommers' bombastic, CGI-heavy approach). However, the qualities that led to Wolf's failure at the time - it's classy, understated style - have allowed it to age very well. In selling Pfieffer and Nicholson as a viable couple, Wolf does a good job of making the unlikely affair between these two work by acknowledging the disparity in their ages and by portraying both characters as being wounded, cynical souls. This is not a carefree pair of lovebirds but two cagey animals, wary of further disappointments. These are people too smart to readily give in to happiness and in turn, their romance is a bittersweet one.

Appropriate to the well-to-do, educated professionals it depicts, Wolf's script by Jim Harrison and Wesley Strick is laced with literate dialogue (even if the film's twists are too easily spotted) and the score by famed composer Ennio Morricone is outstanding - lending a dreamy, lyrical quality to the film's final moments. While Wolf is clearly the work of people whose true nature doesn't lie in telling horror tales, it has just enough of a full moon glow to it to succeed.
Posted by Jeff Allard at 10:15 AM

What a fantastic post on this somewhat forgotten film! I haven't thought about this one in ages but do remember going to see it in theaters when it first came out and giving a general, "meh" reaction but I don't think I've seen it since then. Your post really has me curious to check this film out again after all these years.

Thanks, J.D. - I think Wolf holds up pretty well. It's never gained much of a following - and if it hasn't by now, it likely never will - but it's a decent movie.