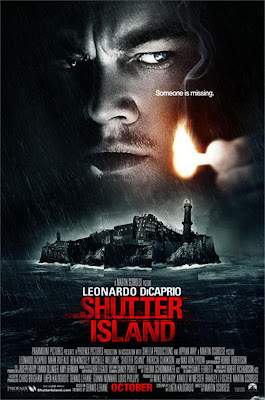 The fortress-like mental hospital that Martin Scorsese explores in Shutter Island instantly joins the ranks of Hill House, the Overlook Hotel and the Danvers State Mental Hospital (Session 9) as one of the great eerie edifices of horror. Adapted from the novel by Dennis Lehane, Shutter Island is a glorious Gothic contraption that finds Scorsese working in top form.

Scorsese previously tried his hand (with great success) at making a horror-thriller with 1991's Cape Fear but whereas Scorsese's direction in that film felt like he was utilizing every trick at his disposal, flexing his prodigious cinematic muscles to over-compensate for somewhat pedestrian material, he doesn't go for the same kind of bells and whistles here. Although every facet of Shutter Island benefits from Scorsese's meticulous attention, the focus is primarily on story and performances rather than eye-grabbing camera moves.

To read my full review, click over to Shock Till You Drop.
Posted by Jeff Allard at 9:34 AM

Can't wait to see this. Good to hear that the hospital is a focal point and it plays an important part in the overall aesthetic.

It definitely does. The locations and production design are outstanding!

I recently re-watched Cape Fear and was astounded by nearly every minute of it. I'm going to have to check out Shutter this weekend.

Shutter is a lot different than Cape Fear - that was a real shout-at-the-screen kind of crowd pleaser whereas this is much more somber and goes to some really dark places. The more I think about it, though, the more I want to see it again. Can't wait to hear your take on it, Unk!

I loved it. Would have watched it again immediately if I could have.

Glad to hear you liked it, Senski - I'm sure your review is going to be great reading!

thanks for the spoil free review! going to see it tomorrow hopefully. looked good from the previews glad to hear it's worth a look.

i really liked Cape Fear and liked what Marty did with it. sure it's a simple story but the grand way it was filmed was what made it so fun i thought.

I love Cape Fear - and seeing Shutter Island has definitely whet my appetite to see it again!