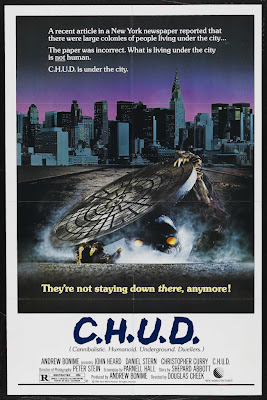 It's not often that the horror community feels good about remakes - especially lately - but The Crazies has put some wind in the sails of the idea that, yeah, some properties can be revisited to good effect.

So what better time than now than to beat the drum for a remake that really needs to happen? With dozens of remakes currently in the production pipeline and more announced every day, it baffles me that a new C.H.U.D. isn't one of them. Released in 1984, this tale of mutated creatures running rampant in the sewers of New York City is pretty rank but has still gone on to become the stuff of legend.

The acronym "C.H.U.D." is such a part of the geek vernacular and the notion of monsters in the sewer is so irresistible (The X-Files had one of its best hours - and introduced one of its most revolting creatures - with a C.H.U.D. riff in its second season called "The Host") that the idea of a C.H.U.D. remake seems like a natural (as natural as the idea of doing this remake in 3-D - forget the world of Pandora, taking audiences on a tour of NYC's sewer system is what this technology was made for!).

As The Crazies proves, it's movies with a strong concept but a shaky execution that really lend themselves to updating and that describes C.H.U.D. to a 'T.' Even the asshats at Platinum Dunes couldn't help but make a better C.H.U.D. than C.H.U.D. - and even if they couldn't, a new C.H.U.D. movie would mean that there'd inevitably be a new FANGORIA cover featuring the new (KNB-designed, no doubt) C.H.U.D. on it and for that not to happen is just wrong.

The world needs a new C.H.U.D. even more than it needs a new Boogens and I wouldn't say that if it weren't true.

I don't know if today we'll be able to get the CHUDs to leave those rent-controlled sewers, Jeff...

I thought C.H.U.D. was a swing and a miss back in '84 and every time I go back to have another look it just washes over me how they botched the job. The movie really needed an apocalyptic thrust and some authorial perversity. Someone should pay Larry Cohen to do a rethink and give it another shot.

Senski, you're right - those C.H.U.D.s know a good thing when they've got it!

And Arbo, I agree - Larry Cohen would be an inspired choice to take on a remake. Too bad that it's more likely going to be the likes of Rob Zombie that gets called in.