A Night Man To Remember 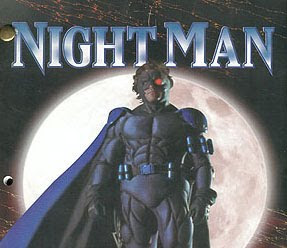 The history of television is littered with hundreds of atrocious programs and each one of them has a faithful fanbase that continues to celebrate them. Even the most devoted followers of bad television, however, may be unaware of the existence of Night Man.

Airing from 1997 to 1999 in syndication (in my area, it played on Saturday afternoons after Soul Train), Night Man was adapted from a comic created by writer Steve Englehart (among his many credits, he was responsible for a seminal run on Detective Comics in the late '70s that inspired the story for Tim Burton's first Batman film) that was published through Malibu Comics as part of its Ultraverse line.
Developed for television by the legendary producer Glen A. Larson (whose credits include Knight Rider, Battlestar Galactica, The Fall Guy, and too many others to mention), Night Man told the story of Johnny Domino, a San Francisco-based jazz musician who has the ability to telepathically recognize evil (thanks to being struck by lightening in a cable-car accident) who suits up (at night, natch) with a high-tech, bulletproof outfit that allows him to fly, grants him invisibility-style camouflage abilities, and also shoots frickin' laser beams out of the costume's left eye-piece.

Night Man was a special kind of asinine. It was crafted with the kind of pure, unaffected idiocy that isn't seen anymore. Sure, they still make lousy shows but they're all pretty serious on their way to sucking. Night Man, however, was goofy from the get-go but not self-conscious about it at all. I guess this was Larson's idea of old-fashioned escapism and, hey, he wasn't wrong about that. Night Man was so old-fashioned, in fact, that it featured shoddy blue screen work that would've been embarrassing even twenty years earlier.

My favorite aspect of the show was how when Johnny had to go into action as Night Man in the midst of his sax act he'd have a holographic image of himself take his place on the stage of the House of Soul jazz club where he performed. Actor and stunt man Matt McColm played Johnny Domino aka Night Man and he has the kind of charisma in this role that can only be compared to Marc Signer's acting prowess in the Beastmaster movie series. McColm mostly went back to stunt work after the cancellation of Night Man and that seems about right.

Night Man ran for two seasons and while the second season lacked the charm of the first (thanks to changes in the cast), the second season did host the history-making team-up between Night Man and the star of an earlier Glen A. Larson production, Manimal as the two crime fighters joined forces to take on Jack the Ripper himself (!).

Original Manimal star Simon MacCorkindale returned to play Professor Jonathan Chase and this episode alone justified the existence of Night Man as a series. I only wish that the show had gone on just a little bit longer so Larson could've teamed Night Man up with the title character of another of his short-lived '80s action series, Automan (the Tron-inspired tale of a hologram that was able to leave the confines of the computer to fight crime).
Just thinking about what might've been is enough to keep me up at night, man.
Posted by Jeff Allard at 9:36 PM

Much more kick-ass than 'Night Mother.

That's because Night Man never heard of sick or lonely.

I kind of got into watching Night Man because I was a Forever Knight fan and it was part of the same late night line-up of low budget fare.
Those were good times...

Good times is right! Speaking of Forever Knight, I've been rewatching that show lately and seeing it takes me right back to those days.