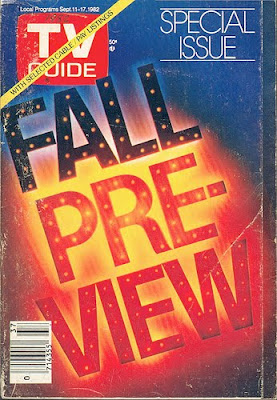 When I was a kid, the only entertainment magazine that my parents subscribed to was TV Guide. During summer vacations when I'd be home at the time the mailman was making his rounds, I used to look forward to hearing the familiar thud of the squarebound Guide as it landed on our porch floor. Of the 52 issues of TV Guide that were published each year, though, the most essential was the Fall Preview. I loved finding out what new shows would be premiering and how many, if any, would be in the sci-fi/horror or action category. For years during the late '70s and early '80s, that turned out to be a high number of shows. The tragic catch was that while I'd get excited for these new programs each season, almost all of them would tank within a few episodes. They'd be gone after a few months or sometimes just a couple of weeks and I'd be left to wonder why so few of the shows I liked ever stayed on the air.

As I got older, I came to realize that most of what I liked was terrible and of little interest to others. But if fans of garbage like King of Queens can have their favorite show successfully run for years, it hardly seems fair that the shows I loved got knee-capped so early on. Now that more and more vintage TV shows are getting issued in complete seasons on disc, however, it's my hope that all those shows that got yanked off the air too soon will eventually be a part of my DVD collection.

I used to think that was a pipe dream but this week the short-lived detective series Tenspeed and Brownshoe, starring Jeff Goldblum and Ben Vereen, arrived on DVD. Originally airing in 1980 and lasting a mere twelve episodes past the two-hour pilot, this failed P.I. show seems like an unlikely candidate for a DVD release. It didn't even last a full season and it's thirty years old. The easiest explanation is that it's been released simply for the fact that it's the work of prolific TV producer Stephen J. Cannell, the creator behind a string of legendary programs including The Rockford Files, The A-Team, and 21 Jump Street. But whatever the reason, seeing Tenspeed and Brownshoe on DVD gives me renewed hope that the following six short-lived series of the early '80s have a real chance of finding their way onto disc: 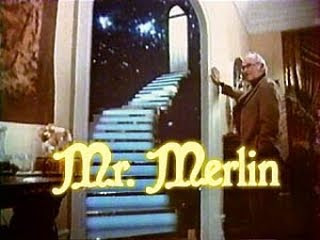 This light comedy that centered on the efforts of Merlin the Magician (played by Bernard Hughes, best known as the grandfather in The Lost Boys) to coach his newfound apprentice in the ways of magic was pretty corny, even by the standards of early '80s TV but I found it to be endearing. It helped that I had a crush on co-star Eliane Joyce, who played Merlin's liaison with his magical superiors.

This cop show brought Untouchables start Robert Stack back to the streets and during its brief run, Strike Force earned a reputation as being the most violent show on the air. My memories of the specific episodes are pretty dim by now but all I know is that it was a Friday night staple for me for a few months and I was pissed to see it go. 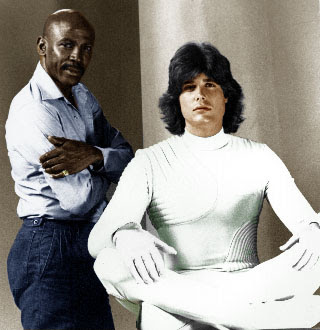 As much as the networks tried to find a hit with science fiction, the genre proved time and again to be ripe ground for failure. This story of a member of alien royalty hiding on Earth from the forces that enslaved his people was epic cheese of the highest order. Adding to Matthew Star's appeal was the fact that Friday the 13th Part 2's Final Girl Amy Steel was part of the regular cast. 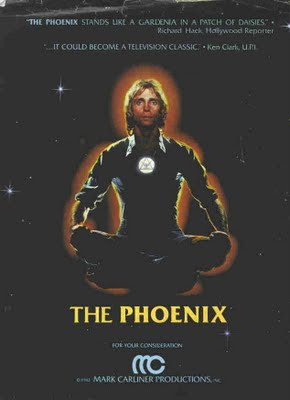 While The Phoenix only ran for about a month, I still have fond memories of watching it on Friday nights back in the fall of '82. This tale of a benevolent, super powered alien revived from his ancient slumber in a Peruvian sarcophagus, and who quickly finds himself on the run, was a riff on the Fugitive formula (just as The Incredible Hulk series had been). Lasting only four episodes past its pilot, it's a shame that TV audiences didn't get to see more of Richard Lynch as a governmental shit heel pursuing Judson Scott (best known as Khan's son in Star Trek II: The Wrath of Khan) as the medallion-sporting Bennu. 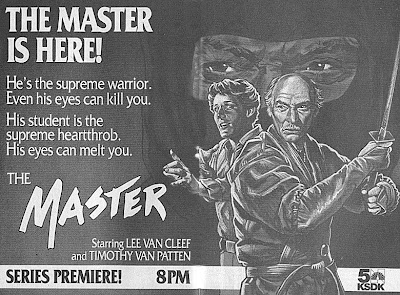 Destined to one day be immortalized on Mystery Science Theater 3000, The Master starred Lee Van Cleef as John Peter McAllister, a veteran of both World War II and the Korean War who became the first Westerner trained in the ninja arts. On a search for his long lost daughter, McAllister teams with an unlikely partner/pupil, the brash, none-too-bright Max Keller (Timothy Van Patten) - a van-driving, odd job-working drifter who has a big heart but yet who is hot-headed and quite possibly mentally challenged. As the pair travel across the country, they can't help but assist other people with their problems along the way. Luckily, that brand of problem solving always involved throwing lots of ninja stars, life lessons for the slow on the draw Max, and provided plenty of work for Van Cleef's black pajama-clad stunt double. 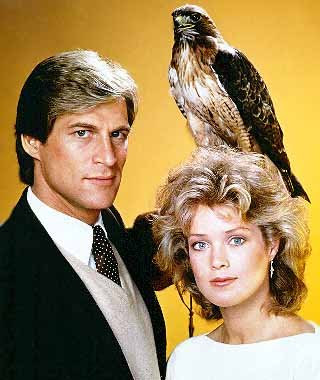 When you fight crime, you need an edge. And what better edge is there on the street than being able to change into a dolphin, or a mouse? Manimal centered on the exploits of Dr Jonathan Chase (Simon MacCorkindale), a shape-shifter with the power to transform into any animal (an ability passed down in his family from one generation to the next) who assisted the police in solving crimes (although his abilities were hidden to all but his two closest friends, played by Melody Anderson and Michael D. Roberts). Thanks to the FX wizardry of a young Stan Winston, several times an episode, Chase would metamorphose into either a hawk or a black panther. This would always be the same footage recycled from week to week but regardless, it still looked great for television in 1983. Not only does this show belong on DVD but I think a big screen adaptation is warranted, too. They can finally afford to expand Chase's repertoire past just the hawk and panther transformations (whenever the script called for Chase to change into a different animal, it occurred off-camera). Forget werewolves - Chase was a were-everything and how cool is that?


Keeping in mind that enthusiasm should always be tempered with some reality, I begrudgingly admit it's unlikely that these shows will ever get legit DVD releases but hey, you never know. I almost fell out of my chair when I saw that Tenspeed and Brownshoe was coming out so I'll keep hoping. The least I can do as a fan is keeping holding a torch for Manimal and the rest of these old favorites. Believe me, it's no burden. In fact, it's an honor.
Posted by Jeff Allard at 11:25 PM

You probably remember the unpleasantness on the set of Matthew Star when star Peter Barton was nearly burned alive by a stunt gone wrong. Wasn't that the reason the show was ultimately canceled?

I don't remember. I do have vauge memories of Barton's on-set accident but I don't know if that's what killed the show. I do know the show took a turn for the worse mid-season when it started moving Matthew out of the high school environment.

I remember most of these shows, especially Manimal. Syfy had a marathon of them I saw back in the late 90's and it didn't hold up as well as I recalled.

The one scene that sticks out to me from that show was at the end of the pilot (I think) when the dude was in the pool and I am guessing Simon's character turned into a shark to attack him. Don't know why but that scene always sticks out in my head.

How could it not stick in your mind? When a guy turns into a shark, that's classic!

I remember The Phoenix and Manimal, but I'm not sure if that's from watching them on SyFy as reruns or not. I do remember quite vividly watching, and LOVING The Master! A time when Ninja ruled the world and the minds of many a young lad. No matter what else they have starred in, whenever I think of Van Cleef and Sho Kosugi, I think of The Master! Thanks for the clips...awesome stuff!

Thanks for sharing The Master love, Matt! How a show about ninjas wasn't a hit, I'll never know!

Wow, Tenspeed and Brownshoe! I remember that being on for a red-hot minute. I also remember the Indiana Jones rip-offs, Tales of the Golden Monkey and Bring 'em Back Alive. I was an avid TV Guide reader as well; those Fall Preview issues were the best.

Yeah, the "Fall Preview" issue: for a couple of years, I'd hold on to it just to see how many new shows got cancelled.

Strike Force! Wow, that show was incredible: a mash-up over every violent scene from every other cop movie, stapled-gunned to outrageous plots (like the clown who sold LSD out of an old schoolbus). My fave memory of the show? Because they couldn't use blood-squibs (but could show slow-motion gunshots), in the first episode, a bad guy's stray shotgun blast tears apart a plate of raw hamburger (!), sending all these meaty chunks just flying through the air. In perfect slow motion. Great stuff!

Will, there's good news for Tales of the Gold Monkey fans - the complete series is coming to DVD on June 8th! Here's a link:

And Ivan, you've got some memory! Now I want to revisit Strike Force more than ever!

Only four episodes of "The Phoenix?" Man, that show really stuck in my head. Maybe it was because the both the leads were so odd-looking.

That must've helped because I can't believe a show that ran for such a short time has stuck in my memories for so long.

I have every Fall Preview TV Guide released in the 80s. I read them over and over. They're incredible.

I loved Strike Force. I remember it coming on a little later and my parents letting me stay up to watch it. Same with Renegades with Patrick Swayze (another forgotten gem that beats 21 Jump Street to the punch by a quite a few years!).

I'm so excited about Tenspeed and Brownshoe. I saw every episode with my parents. Wonderful.

And where's the love for Street Hawk. ;)

Thanks, Amanda - and by the way, I totally envy your TV Guide collection!