The Hunt Is On! 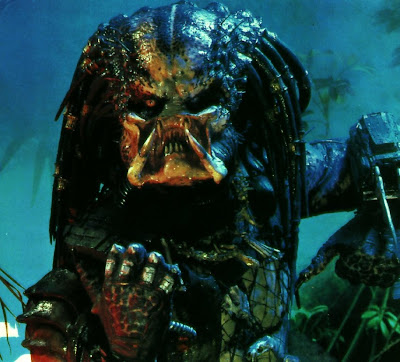 If there's one film franchise that never reached its full potential, it's the Predator series. After a classic kick-off with John McTiernan's original Predator (1987), the 1990 follow-up, Predator 2 (directed by Stephen Hopkins) was fun but just wasn't in the same league as the first film. Recent attempts to revive the Predator's box office clout by pairing them with another flagging sci-fi franchise with AVP: Alien vs. Predator (2004) and AVPR: Alien vs. Predator - Requiem (2007) could be charitably be called mixed bags. Or they could just be called lousy. Thanks to Stan Winston's design work, I think the Predators rate as one of the top movie monsters of the modern age but it's a shame they haven't been showcased in better films lately.

With July's release of Predators, however, hopefully a new film worthy of these intergalactic bad asses will arrive. Debuting the new Predators trailer and behind-the-scenes footage at the South By Southwest Film Festival on Friday, producer Robert Rodriguez, director Nimrod Antal, and FX artist Greg Nicotero gave the public their first look at what's in store for the latest hunt and while the trailer isn't available online yet, the Predators site does have a sneak peek of clips, interviews and behind-the-scenes footage that looks frankly awesome. Some might disagree on that point, and bring up some stupid shit that just sounds like empty noise to me ("It's set in a jungle? How original!"), but whaddya gonna do?

I'll admit that I'm not the biggest Robert Rodriguez fan. I do love how he's created his own mini-empire; the fact that he's a guy who can basically wake up, walk down to his garage and make a movie is cool as hell. But the movies themselves haven't always won me over. He isn't directing Predators, just producing, but despite Nimrod Antal calling the shots, in many ways this will be a Robert Rodriguez film. I think he knows exactly what the audience wants to see in this case, though, just as he did with Planet Terror, his half of Grindhouse (2007). That movie may have tanked but Planet Terror itself was built to be a crowdpleaser and it handily mopped the floor with Tarantino's contribution, the talk-fest Death-Proof (the Facts in the Case of M. Valdemar to Rodriguez's Black Cat). Tarantino's segment may have been about a homicidal stunt driver but Rodriguez designed Planet Terror to be the B-movie version of a pimped-out muscle car. Rodriguez had the perfect instinct for what Grindhouse should've been and I think that'll be true of Predators, too.
I'm pretty free of cynicism when it comes to movies. It's just the way I'm wired, so seeing the initial Predators footage is enough to get me totally jazzed. Seeing the original Predators in theaters at a midnight show remains one of my favorite summer movie memories and I'd love it if Predators turned out to be another great memory to match it.
Posted by Jeff Allard at 6:15 AM

I'm really excited about this as well. I like the concept or idea of plopping the 'hunted' on the Predator's planet and they have to band together to save themselves. I also like Rodriguez's point on focusing on each individual character, so much so that they could stand on their own as the lead in any other type of film. And agreed, the time is right for the Predators to get their due and a better faring in film. One of the coolest movie monsters to ever grace the silver screen!

I've got a feeling this is going to be a lot of fun. Some might carp that this just looks like a variation on the first film but that seems like the smart way to go to me.

God damnit.. everything I am trying to find has been locked out!! I cant wait to see this even though I am not a Rodriguez fan either. I am much happier to have him in a producer's seat than as director however, and I really do have high hopes for the film!

I think Rodriguez in the producer's seat will be a good thing for this movie. But we'll see how it all turned out come July!

I believe that Rodriguez has said somewhere that he wants to do for the PREDATOR franchise what Cameron's ALIENS did for the ALIEN franchise - hence the pluralization of PREDATORS.

I really like Rodriguez. He doesn't make any bones about the kinds of films he makes and goes for it. I agree completely with you about PLANET TERROR, esp. in relation to DEATH PROOF. If the mandate of the GRINDHOUSE films was to ape the old B-movie aesthetic then Rodriguez was much more successful than Tarantino, IMO.

The footage of PREDATORS that has been release so far looks promising and I'm definitely looking forward to it... that and Rodriguez's MACHETE which can't come out soon enough!

Yeah, can't forget about Machete! It's going to be funny to see the first trailer for that - it'll be the first ever trailer for a movie based on a trailer!