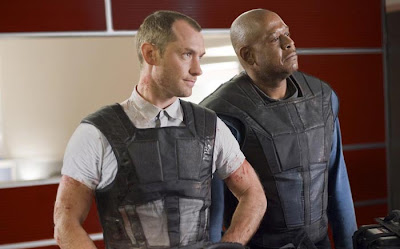 If you have any interest in catching Repo Men in theaters, I suggest you don't wait because I don't see this one sticking around for long. That's not to say it's bad. I mean, it's not exactly what you'd call good, either, but it ranks as a watchable sci-fi actioner. It's just too grisly and oddball for the mainstream while not being a superior enough genre effort to get hardcore sci-fi fans excited. It's kind of a 'whatever' movie but my hat is off to whoever convinced Universal to finance it - whether it be director Miguel Sapochnik, the producers, or whoever.

I'm sure many commercially sound scripts are collecting dust at studios all over Hollywood as we speak, left hanging in limbo, while Repo Men is playing to near-empty theaters around the country (if this turns out to be a big hit, or even a modest hit, I'll be flabbergasted) so it makes me wonder: what advanced powers of persuasion did it take to make this project look like a good bet to the powers-that-be? I'm totally stumped on that one. I never saw Repo: The Genetic Opera (2008), by the way - and I have no plans to do so - so I can't comment on any similarities. That's another movie that I can't figure how it got funded in the first place (even if it was a much more low-budget affair than Repo Men) but I have a gut feeling that we won't be seeing any more of these films - musical or otherwise - any time soon.

For my full review of Repo Men, click over to Shock Till You Drop.
Posted by Jeff Allard at 8:04 PM

Pretty much how I felt. It's got a few moments here and there, and the performances are good, but it doesn't add up to much in the end. As for the similarities to 'Repo: The Genetic Opera', once you get past the basic concept of repo men collecting organs, the two movies take very different paths both in plot and approach. Can't say I really liked either film that much, though.

Yeah, I've got no interest in catching up with The Genetic Opera. As for Repo Men, while it's not without some merit, it's a mystery to me how it got made and into theaters.

I haven't seen Repo, The Genetic Opera so originally, I wasn't aware of any similarities. I thought this looked like something original and fun. Disappointed to here that it wasn't that great. It looked interesting enough.

It's worth a watch - but you're better off waiting until DVD to catch up with it.

Repo the Generic Opera was a snooze! I'll admit I'm no musical theater buff, but can certainly appreciate song among the weirdness (like in Wiz of Oz or Willy Wonka), but it seemed so focused on a particular sub-genre (joyless, goth-influenced, morbid self-absorbtion) and the songs were just plain dull. I couldn't finish watching it.

Repo Men was on my radar as a potential DVD renter with a six-pack, but it sounds like I'd be better off watching something else--Ninja Assassin, perhaps?

Jeff, thanks for taking one for the team!
--Ivan

No sweat, Ivan - I've seen much worse! And I give a solid recommendation to Ninja Assassin, by the way. Watching that at home with a few beers should be about right!