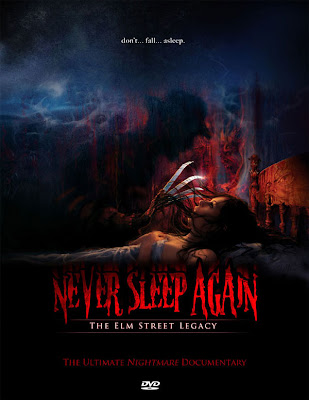 Due on DVD May 4th, riding on the heels of the Nightmare on Elm Street remake, is the documentary Never Sleep Again: The Elm Street Legacy. The box art for the DVD has recently been revealed and, as drawn by original Elm Street poster artist Matthew Joseph Peak, it looks awfully sweet. I'm actually more excited to see this franchise-spanning doc (produced by the same team responsible for My Name Is Jason) than I am to see the remake.

Unlike Halloween or Friday the 13th - series that I had to catch up with on TV because I was too young when the early entries of each series came out - I hit the ground running with Nightmare and saw the 1984 original in theaters. Being able to watch the Nightmare movies from the beginning gave me both a fondness for the series but also a little contempt towards it as well. I suspect it's a common reaction among fans to feel that, with rare exception, once they're old enough to see horror movies on the big screen unsupervised the movies don't seem as cool as the ones that came before their time.

The original A Nightmare on Elm Street, however, definitely lived up to the minor maelstrom of hype that accompanied it (hype was harder to generate in those pre-internet days). Every sequel after that, though, was an exercise in disappointment. Even the much-admired Dream Warriors seemed jarring to me at the time as that's where the Freddy one-liners started to take on a life of their own (although, admittedly, the one-liners in Dream Warriors are classic).

Still, time has made me fonder of The Gloved One and the carefree era that he reigned over. At the height of the Nightmare series' popularity, it seemed galling to this serious-minded fan to have horror's flagship character be all about buffoonery and MTV-style razzmatazz. Now I wish horror could have some of that love of pure entertainment back. Even the most moronic genre films today - such as The Unborn or Daybreakers - have a dunderheaded earnestness to them that's just boring. Freddy, on the other hand, was always ready with a quip and a cackle. Freddy may have been seldom scary but in retrospect, I realize that it was always a kick to have him around.

Email ThisBlogThis!Share to TwitterShare to FacebookShare to Pinterest
Labels: A Nightmare on Elm Street, Freddy Krueger

Nightmare was the series I first saw in theaters too, but that wasn't until Freddy's Dead, unfortunately. I am very excited for the doc and I hope it's solid, but even if it isn't, I'll probably still like it. Love that cover art, though, so that's a win so far!

I agree - the cool cover art alone is worth the buy! I just hope this is better than the scattershot My Name Is Jason. That just didn't come together the way it should've, in my opinion.