Help Is On The Way! 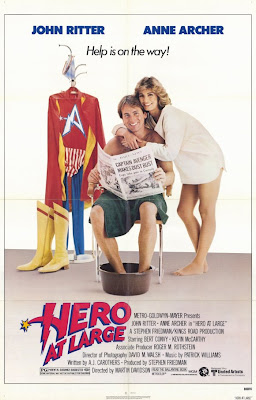 It's been over a day now since I've seen Kick-Ass and I've been mulling over why I wasn't over the moon about it like some fans have been. You'd think it'd be completely up my alley as it ostensibly plays right to the hardcore comic book geek but while I got some good laughs out of it (mostly thanks to Nicholas Cage), in the end Kick-Ass left me feeling more empty than exhilarated - a feeling that's only grown since my viewing. Ultimately, I think Kick-Ass wasn't quite for me because it's not the way I view heroes. I don't have any problems with some fictional heroes being full-on killing machines - I'd be awfully sad to live in a world without Rambo or The Punisher, for instance. But when you're talking straight-up superheroes, there's a level of idealism that I don't think should be casually dispensed with.

In that regard, a movie that's everything Kick-Ass isn't is 1980's Hero At Large. John Ritter stars as Steve Nichols, a struggling actor who takes a job dressing as the comic book hero Captain Avenger to promote an upcoming movie but after he stops a robbery while in costume, he decides to keep on fighting crime. While Steve briefly loses his way morally after getting caught up in a PR scheme by NYC's mayor's office to have him continue as Captain Avenger but only foiling staged crimes, he eventually proves himself as a true hero by rescuing a child from a burning building. I haven't seen Hero At Large in many years but it was an early HBO favorite of mine as a kid. It was corny, it wore it's heart on it's sleeve - and at the risk of sounding square, I'll take it over Kick-Ass any day.

The best part of Kick-Ass for me was the speech that Dave Lizewski, aka Kick-Ass, makes early on in the film to a gang of punks as he tries to keep them from beating up on a lone victim. Incredulous at this skinny kid's dogged determination to get between them and their target, they say he's crazy for helping someone he doesn't know but Dave's defiant response is that it's crazier to see someone being attacked and to do nothing about it. By the end of Kick-Ass, I found it slightly depressing that a character who is initially depicted as a selfless defender of his fellow man was turned into a character willing to pump bullets into criminals - and even worse, that this development wasn't even acknowledged within the film as being a huge transformation. Dave is pretty much the same kid after taking lives as he was before - except maybe he's a little cooler afterwards.

Most of the movies I enjoy have a body count so I'm not going to be a hypocrite about violence in films but there's a difference between, say, a Death Wish film and Kick-Ass. I never thought the violence in the Death Wish series looked fun. For viewers, there's obvious gratification in it, yes - the vicarious excitement of seeing someone refusing to be helpless against crime - but in those films being a vigilante was depicted as being a death sentence for your soul. In Kick-Ass, however, slaughtering human beings is made to look like a romp.

I never gave much thought to the violence in the Kick-Ass comic because the series had such a sociopathic disposition all the way through. But with the movie, the notion that Dave's succeess as a hero rides hinges on him being able to kill feels wrong. It would only have really worked for me if there were an epilogue to Kick-Ass with Dave either selling off or burning his comic book collection because he didn't have any more use for the ideals that initially inspired him.

It's true that modern comic books are much darker than those of earlier eras - Frank Miller's The Dark Knight Returns and Alan Moore and Dave Gibbons' Watchmen (both from 1986) - ushered in a movement towards portraying grim n' gritty heroes that still influences the medium to this day. But even with that darker tone, killing remains a real rarity among the superhero set. They might brood a lot more than the sunnier heroes of the past did, but they seldom use lethal force. When they do, it's usually regarded as a shocker. From Kick-Ass, though, you'd think that comic book heroes must be out to murder all of their enemies. If that were true, that would make them assassins, or serial killers - not superheroes.

Maybe that's why being a comic book geek worked against me when it came to enjoying this movie. As an adaptation, Kick-Ass is true to the specific comic that it's based on but it's not faithful at all to the ethos of superhero comics in general. If Dave had been a movie buff who got his inspiration from blood-soaked revenge pictures, it'd make more sense. I'm not offended by Kick-Ass - I just can't reconcile the violence with the premise of the movie. Both in the comic and the movie, the violence seems to be a product of lazy writing - only there to impress readers who otherwise wouldn't think that comic books - or movies based on comic books - are cool. And as a comic fan, that puts me off more than the violence itself.

If Dave really wanted to become the kind of crimefighter that he becomes in Kick-Ass, then he wouldn't have been in comic shops reading about the likes of Captain America. Instead he would've been subscribing to magazines like Soldier of Fortune or Guns & Ammo. The real-life culmination of his heroic fantasies ultimately proves to be more about Smith & Wesson than about Batman and Robin. The problem with Kick-Ass is if I want to watch a movie about a killer at large, I'll watch a horror movie or a real vigilante picture - and if I want to see a hero at large, I'll go with the authentic item. Who wants to see a kid pretending to be a superhero when Iron Man 2 is on the way?

Haven't seen Kick-Ass, so I can't comment. Although Nicolas Cage is a definite negative for me.

However, Hero At Large - WOW! Haven't thought of that movie in YEARS. Used to watch it over and over, back in those early HBO days, too. Loved it, was just a great film. Gonna have to see if I can find a copy. Cool memory lane trip, dude!

Thanks Wings - I'm gonna have to track down a copy of Hero At Large myself. It's been at least twenty five years or more since I last saw it - I hope it'll live up to my fond memories!

This kinda sums up my misgivings about 'Kick Ass'... when I first heard about the movie I thought it was gonna be more about juxtaposing the fantasy of superhero comics with the realities of real-life crime... with all the ugly consequences for a wannabe vigilante left intact.
It doesn't get there though... instead it just opts out of really being about much of anything in favor of lots of 'cool' gun play.

Yeah, the comic actually does a better job of maintaining a consistent tone while the movie is all over the place. At first I liked that there was more humanity and altruism instilled in Dave's character but that actually screws with the movie more as it can't gel with all the sociopathic violence. And while the movie sets up the promise of exploring the real-world consequences of being a superhero, as you say it chucks all that out the window in favor of 'cool' violence. It has its entertaining aspects but the whole movie falls apart upon the slightest inspection.