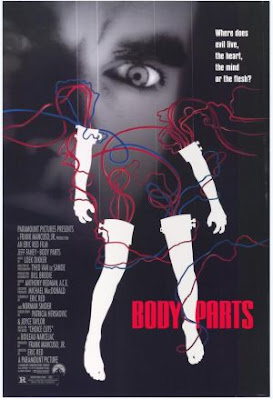 The summer of '91 was especially barren for fear fare but on the upside, that only made the, ah, limber medical chiller Body Parts all the more memorable. It's probably hard for younger fans to imagine a time when there wasn't a glut of horror movies to enjoy but that was the way it was back then. I mean, this summer is a little light but at least there's been Splice, Predators, Survival of the Dead and [REC] 2 (the later two in limited release and VOD) and The Last Exorcism and Piranha 3-D are on the way.

In comparison, the summer of '91 had Body Parts, Child's Play 3, and Dead Again (and calling that horror is really stretching it). So with so little to see, you had to appreciate what was out there.

With Body Parts, that wasn't so tough as I liked it from the get-go. It's flawed, yes, but the cast is terrific, the premise is classic, and writer/director Eric Red knows the genre well enough to be able to surprise even seasoned viewers once or twice. It'll never be a classic but it's still a keeper. I also fondly remember it because a friend of mine at the time inexplicably insisted on pronouncing Fahey's name with four syllables. Whenever I see Body Parts, I always hear my long ago pal's voice saying "Fa-ha-hey-ey" in my head. Good times!
To read my full Summer Shocks review, click here.
Posted by Jeff Allard at 6:55 AM

Ahh 91, the year of my birth. Like you mentioned it was quite the barren landscape for horror then. I was always remiss by the fact that there weren't any mind-blowing horror movies released then. Well, that depends on if you count The Silence Of The Lambs. Then I guess that makes up for everything. =)

This film looks pretty promising. Another take on the Orlac tale it seems. I'll have to check it out sometime. Thanks for pointing it out!

No problem, Joe! And thanks for making me feel old, dude!

I haven't seen this film in ages but it is great to see Fahey enjoying a career resurgence what with PLANET TERROR and his appearances on LOST. I hope he gets more high profile gigs like those!

I agree. It'll be a kick to see him Machete! I never understood why his career didn't take off bigger back in the day but it's nice to see him popping up more and more lately.

I love this one, first saw it on TV and couldn't believe how respectful of the 'Hands of Orlac' connection it was. A horror movie with a sense of history - important because it makes an effort not to repeat the plots of previous similar films on the same theme.

Also part of a horror sub-genre that mixes chills with outrageous car stunts!

Yeah, I always get a kick out of horror movies that mix in action elements. The car chase in Body Parts is crazy good.