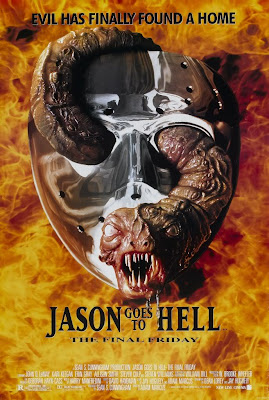 Before I say a few things about my Summer Shocks selection for 1993, let me just say how crushing it's been to discover how badly Jurassic Park has dated. I don't know - maybe I'm the last one to find this out, maybe everyone else has known that Jurassic Park sucks for awhile. If so, bear with me.

I was all set to go with Jurassic as my pick for '93. I saw the movie several times in the theater and still have fond memories of seeing terrified kids haul ass out to the lobby during the first T-Rex attack. It was the most notable movie event of that summer, the movie that single-handedly ended the era of stop-motion animation.

Watching Jurassic Park now, though, is a painful experience. The effects are still astonishing but the characters are just dead weight (even good actors like Sam Neil, Jeff Goldblum, and Sam Jackson can't do much with their parts), any screen time spent on the kids is torture, and talk about a drawn-out set-up! I knew that it took awhile to get to the T-Rex attack but it's over an hour (!) and every minute drags by getting there. By the time the T-Rex finally shows up to party I had fucking had it with the movie and everyone in it. On the upside, I watched Jurassic Park III afterwards and still really dug it as a solid B-movie. But that superior sequel was from 2001 and this is the summer of '93 we're talking about, which brings us to Jason Goes To Hell.
There's not a lot of support out there for this movie and I get that. I think the fact that the series went on to ignore this entry altogether makes it easier to appreciate on its own terms as a one-shot deal but yet I do agree that writer/director Adam Marcus and co-writer Dean Lorey should have put down whatever they were smoking, checked their egos, and made a real Friday the 13th movie. If only Sean Cunningham had brought back director Joe Zito for Jason Goes To Hell, I bet Zito would've delivered something tight. And it's a guarantee that no metaphysical, mystical nonsense would've made its way into the film.
Shit, back in the day there'd be no way that Marcus would've been allowed to film a single page of his screenplay. According to interviews in Peter M. Bracke's book Crystal Lake Memories, when Zito did The Final Chapter and Tom Savini came up with the idea of having Tommy Jarvis kill Jason with a handmade microwave contraption, the money guys back then said no way, that it was too "sci-fi" for the Friday the 13th universe. Machetes - now that was what Friday the 13th was all about. Those guys who called the shots on all the sequels through A New Beginning would've taken one look at the Jason Goes To Hell screenplay and thrown it out the window.
That said, and putting aside the fact that everyone involved in this film needed to have some sense shaken into them, there's some fun to be had with Jason Goes To Hell. I'm sure that Sean Cunningham regrets letting Marcus and Lorey run with the ball but it is what it is. For my full review, click here.
Posted by Jeff Allard at 6:48 PM

I think taking this film as a one-shot, completely ignored entry is the only way to enjoy it. Cause... wow, it is something weird.

Yeah, it's a classic case of "what were they thinking?" I still dig the movie but it was too far out for a lot of fans. I think Marcus and Lorey thought they could chase after some of the wider audience (and critical approval) that the Nightmare on Elm Street series had by turning Friday the 13th into something more imaginative but it's a slaughter series and you can't get too far away from that.

Agree with the above comments. I went on a Jason marathon in college about a decade back and when this one came up I was excited. . .but Jason makes a cameo! It's almost like a bizarre sixth season episode of a TV show with a bigger budget. Still enjoyable though.

In 1993, I was 11 so I didn't see this in the theater. But I remember the big rumor (before the internet and with 6th grade imaginations) was that Jason's mask was taken off! I honestly can't remember if that's what happened now but that was THE selling point to the under 12 crowd!

The funny thing is that Jason's mask came off in pretty much every movie - and his face always looked different! Once he became a zombie or whatever it hardly mattered if his face looked different from film to film ('cause it was rotting anyway) but in the early films when he was just supposed to be a guy, it was crazy how they never kept his look consistent!