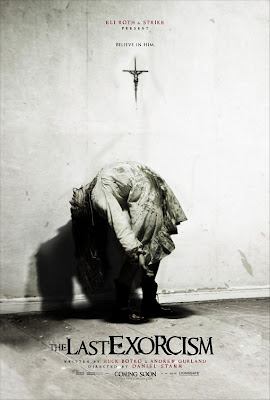 Filmed under the mild-mannered title of Cotton, distributor Lionsgate changed the title of this faux-doc - directed by Daniel Stamm, written by Huck Botko and Andrew Gurland and produced by Eli Roth - to the more marketable moniker of The Last Exorcism. And while that title change may have yielded a big opening weekend, most customers have not left the theater happy. "Exorcism" is a buzzword for horror fans that you can't mess around with unless you really intend to deliver the goods. Unfortunately, The Last Exorcism is a classic case of "they showed all the good stuff in the previews."

Had Lionsgate stuck with the title of Cotton, this movie might not have been quite as disappointing (then again, it also wouldn't have been as profitable, so there you go). The title Cotton correctly creates an expectation that the movie is a character study first and an exorcism movie second and as a character study, The Last Exorcism isn't half-bad. Patrick Fabian is excellent as Cotton Marcus, a disillusioned preacher who was raised by his reverend father to follow in his footsteps. Having been groomed as a child preacher, Cotton has been getting parishioners good with God for years. He's also performed many exorcisms, all of them fraudulent. A news story about a botched exorcism that resulted in the death of a young boy has inspired him to perform one last exorcism, with a documentary crew in tow, in order to "out" the phony practices of the church and hopefully stop people from turning to a potentially dangerous method of "curing" their loved ones.

Cotton randomly picks a letter sent to him asking for help and soon he and the doc crew are off to the isolated grounds of the Sweetzer farm where Nell Sweetzer (Ashley Bell), the teenage daughter of stern widower Louis (Louis Herthum), is in the throes of what Louis believes is demonic possession. Nell's younger brother, Caleb (Caleb Landry Jones), greets the intrusion of Cotton and co. with surly anger and characterizes his father as "a superstitious drunk." So far, so good. It's an interesting set-up, the actors are giving it their all, and as the story progresses, there's several unexpected twists and the question of whether Nell is truly possessed or not is kept up in the air.

The problem is that little of what's happening is the least bit scary. It's interesting, yes, but when you refer to a horror movie as "interesting," that's often just a code word for "boring." I can't fault the reaction of kids who went to see this (thanks to its PG-13 rating), spent two hours shifting in their seats waiting for a horror movie to kick in, and left pissed when the end credits rolled. It's not for nothing that audiences are calling bullshit on this movie. I don't think horror movies should have to cater to the attention deficit crowd but in this case, I can't blame people for feeling they were short-changed.
One aspect of The Last Exorcism that I liked that few others do is its controversial ending. I'm not sure what people don't like about it. Is it that it's too abrupt, that it leaves too much unresolved, or that it's too cartoonish? Without giving away specifics, I think if the movie had ended any other way, I would've been let down. The ending has a sense of pay-off that the movie really needed, where all the ambiguity is finally kicked to the curb. And for those who find it too abrupt, or too much of a left-field development, I say that it was laid out in a way that would reward a second viewing. If the complaint is that it's too horror movie cheesy, I say that's something the movie could've used more of. If anything, it left me wishing that someone would get a full-on return to satanic thrillers going. Movies like The Devil's Rain and Race With The Devil (both 1975) scared the shit out of me as a kid and I think that devil worshippers will always be ripe material for horror films. In the meantime, The Last Exorcism is just a tease.
The film's biggest issue, its lack of scares and the love-it-or-hate-it ending aside, is the faux-doc format. When you have a movie like this, the first question that needs to be asked was "how was this footage found?" and "who put this movie together?" The Blair Witch Project (1999) is a perfect example of how to do the "found footage" conceit right. Kids disappeared in the woods; at a later date, the footage they made of their trip was found, and that's the film you're watching. If you're doing a found footage movie, it has to make sense within the premise of the film. [REC] (2007) is another good example - it's the footage shot by a TV news crew. Easy. With The Last Exorcism, the idea that this is the work of a documentary crew makes no sense. It could've, maybe, if they didn't present the film as a finished doc. There's onscreen titles to identify speakers, there's a music score - this isn't just found footage, it's a film that's passed through some hands. That would be ok to a point but the ending shoots that out of the water. When the climax unfolds, the question of how the footage was found and who put it all together becomes a sticking point.
The notion that this is all being filmed by a documentary crew also reveals its flaws earlier when Nell is going through her second rite of exorcism and it appears that a demon really might be in her. Her body goes through all kinds of painful, impossible-looking contortions but yet the cameraman keeps turning his camera to get the reactions of the other people standing around. Sorry, but if you've got a camera and a girl is going through some kind of possession right in front of you - why would you move the camera off of that for even a second? You wouldn't. It'd be like being in the right place at the right time to shoot footage of Bigfoot coming out of the woods but turning your camera to check out a squirrel.
To me, the whole point of making a faux-doc about an exorcism would be to blow people's minds by having the familiar staples of exorcist movies happening "for real." It would be a FX challenge to have this stuff - the bed rising, the projectile vomiting, the words appearing on someone's bare skin, etc, - all happening in a single take, and done "live" as it were. That should be the "wow" factor of a movie like this, to take it back to old-school FX, the tradition of stage magic. If you're not going to do that, you might as well make it as a straight narrative film.
The makers of The Last Exorcism didn't have a bad story to tell. It's just too bad they didn't know the best way to tell it. Its title aside, this won't be the last exorcism horror fans see on screen but it will be one of the least.
Posted by Jeff Allard at 5:58 AM

Now I feel okay about waiting for this on DVD or Netflix Autoplay. I really did not want to break my months-long rule of "no found footage horror" for this movie. I think the only reason I have a slight interest in it at all is the Southerness of it.

Cotton would be an interesting name for a film if it were a film about Cotton Mather. Why hasn't that been done yet?

Wow, I didn't think your review would wildly vary from mine. Goes to show you just how subjective horror is :)

I thought this film was terrifying and a couple of scenes in particular (the baby doll crying or was it really her? and the multiple voices and perching atop of the armoire) really got to me.

Overall, I thought there were some modern religious parallels that could be drawn. And to me, at the end, it painted a pretty bleak picture. It also made the film that much more terrifying.

Sarah, I think this movie will play better at home. It's definitely worth a look, just not worth paying top dollar for.

PoT, I did really like the basic story and as I said in the review, I'm even down with the ending. My biggest problem is that the documentary approach was a big mistake. Had they filmed it in a straight narrative style, they could've punched up the atmosphere, the scares, and the movie wouldn't be suffering from the same gaffes in logic. It's a good story - I just think they should've gone about telling it in a different way.

Yeah, you're dead on with the barn scene gaffe. But would a straight narrative worked as well? The thing I like about found footage films is the sense of realism it immediately provides. Regarding the end and the actual 'finding' of the footage, the camera man got taken out. I guess one would surmise that the son forgot to take out the video evidence?

Wow, I think part of what I wrote didn't make sense. I'm going to chalk it up to being a Monday :)

I guess what I was trying to say was that the found footage schtick worked more towards building a more honest, 'real' story line rather than a straight narrative. You felt like you were watching real people, with real concerns, reacting to real situations. Despite some of the gaps in logic, I don't see how the film would have worked any other way. But that's just me.

Well, usually found footage films are about giving a sense of rawness but the footage here is so professionally shot - which makes sense because it is supposed to be shot by pros - that it might as well be a 'real' movie. It's well-shot, well-lit, the camera is generally steady, there's even a music score over it.

I think that the movie still could've been about Cotton being filmed as the subject of a documentary but just not have that be the format of the film itself - maybe just cutting to that footage occasionally for dramatic effect would've worked better. Who knows?

Once again your writeup of a movie I had no interest in now has me wanting to see it.
I realize you weren't full on endorsing it but some of the stuff you mention intrigues me and lets me know it's not what I thought it was.

Thanks, Knob - glad I could pique your interest on this one. Even though my review was leaning towards the negative, I do think it's worth a look. If nothing else, it's one of the best-acted genre movies I've seen lately. Hope you enjoy it when it come to DVD!