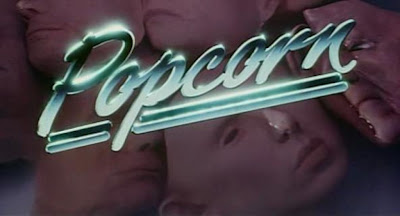 To my fellow US citizens: as you prepare to stuff yourselves at dinner tables across the country tomorrow in celebration of the Thanksgiving holiday, I suggest that as you feast on turkey that you also leave some room for Popcorn.

Popcorn, a funky, B-movie adoring slasher pic from 1991, is one of those movies that was first discovered by so many fans on VHS that it tends to be forgotten that it played in theaters but it definitely did as I saw it on its opening weekend and liked it immediately. Prior to Popcorn's release, late night TV was deluged with commercials like this:

Upon hitting theaters on February 1st, 1991, Popcorn was fated to be overshadowed at the box office by one of the greatest genre films of the decade, The Silence of the Lambs, which arrived just two weeks later on February 14. Of course, Popcorn was never going to be a blockbuster - regardless of whatever competition it faced - but it looked especially puny next to the high-caliber frights of Silence. Silence was A-class all the way while Popcorn represented horror at its most B-level, right down to their leading ladies. Unlike Jodie Foster, Popcorn star Jill Schoelen - one of the last of the '80s Scream Queens, having starred in The Stepfather (1987) and The Phantom of the Opera (1989) - was a long way from Oscar gold.

But B-movies and their players have their own immortality and Popcorn has steadily built a fanbase over the years. Schoelen stars as Maggie, a film student haunted by fragmented dreams who comes to believe that Laynard Gates, a Manson-esque cult leader who attempted to burn his followers alive, is stalking her inside the old movie house where her class is hosting an all-night horror marathon. As in her other genre efforts, Schoelen makes a game, appealing heroine and the supporting cast has more personality than the average slasher ensemble.

This is likely due to the fact that, as opposed to the slasher films of the early '80s which had usually starred unknowns, new to acting, Popcorn's cast were all seasoned performers. Tom Villard (One Crazy Summer) was pushing forty when he played Toby, and the rest of the young cast - Ivette Soler (now a garden designer and consultant known as The Germinatrix) as Joanie, Malcolm Danare ("Moochie" from Christine) as the wheelchair-bound Bud, and Kelly Jo Minter (Summer School, The People Under The Stairs) as Cheryl - were all in their mid-to-late twenties and had many credits to their names. All were able to make their slightly written Popcorn roles seem a little fuller than they are.

Ultimately, the biggest problem with Popcorn is that it isn't scary, something that's never good for a horror film. But Popcorn's affectionately observed mock movies, like The Amazing Electrified Man (featuring Bruce Glover) and Mosquito, are dead-on in every detail and the film's wittily conceived slasher scenes, which make lethal use of William Castle-style gimmickry, are worth a chuckle (in the annals of horror cinema, only Popcorn has a character speared by a giant prop mosquito).

Popcorn likely would've been a far better film had Alan Ormsby and Bob Clark, the duo responsible for '70s classics like Deathdream, had stayed with the production in their respective roles of writer/director (replaced during filming by the producers by Mark Herrier, the faux films are all that's left of Ormsby's work, but they show how key his contributions were) and writer and associate producer (Clark had his name taken off Popcorn's credits) but unfortunately we'll never know.

Currently, an effort is underway to not only reissue Popcorn on DVD (until that happens, I'll continue to closely guard my copy) but to also film a retro-documentary as well (check out their production blog here). As all the principal players involved in the film - save sadly for Tom Villard, who passed away in 1994, and Bob Clark, who was killed in a car accident in 2007 - are still alive and well, I hope it happens. In the meantime, check out this recent interview with Jill Schoelen at Late Night Classics. Popcorn may never have the kind of following that other horror films of similar vintage have garnered, but, like its hot, buttered namesake, it's still tasty company for movie fans.

My friend always thought that the tagline for Popcorn was a classic: "Buy a bag...go home in a box."

Shameless plug: Enter to win a copy of the new family comedy Opposite Day on DVD! Click here

It is a fun film, and not only are the retro exploitation films dead on, the faux experimental compares well to the films of Kenneth Anger and the Kuchars. Like you say, too bad Clark and Ormsby weren't allowed to make their film, but that's Hollywood for you. At least the finished product is still a fun watch.

FF, congrats in advance to the lucky winner of Opposite Day!

Bob, I agree - Popcorn still works, even if it shows the strain of being a troubled production. I hope that if a doc does get made, that they'll get Ormsby to talk about his time on the film.

Never saw this, going to have to rectify that ASAP!

I wondered if there had been a DVD release with any extra scenes. When I saw it in the theaters it seemed like a lot had been trimmed out of it, and not just violence.

I think a sense of disjointedness might be a result of switching directors during filming. The Elite DVD had a set of previews but no deleted scenes.

Yes, the film is disjointed - it was a troubled (though completely fun!) shoot. Bob Clark and Alan Ormsby had different visions of the film, which resulted in Ormsby's early departure (I was SO upset - I really wanted to work with him!). Although Mark Harrier was brought on, it was Bob Clark making the directorial decisions.

Another reason for the sense of disjointedness was that the leading lady was re-cast about 2 months into the filming. Amy O'Neil (from the first Honey I Shrunk the Kids) was the original Maggie - Scholen came in and there were re-shoots galore.

Yes, a troubled production - but as a HUGE fan of horror films, I am super proud of my participation in this one!

Ivette, thanks so much for taking the time to stop by and comment! Popcorn may not be a perfect film but it IS a hell of a lot of fun and it's one I return to frequently - often ahead of much more famous fright films.