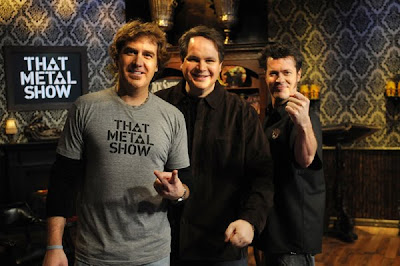 If you've never watched That Metal Show on VH-1 Classic, it's an hour-long talk show devoted to all things metal - The Tonight Show for headbangers. DJ Eddie Trunk is joined by co-hosts Jim Florentine and Don Jamieson as they discuss and debate the hard questions like which of Ozzy's first two solo albums is better - Blizzard of Ozz or Diary of a Madman (I've got to go with Blizzard - it's just too classic).

Guests from the metal world, like Scott Ian, Rob Halford, and Alice Cooper among others stop by to reflect on past glories and discuss their current and future projects and for metal fans, it all adds up to an entertaining hour of TV. But as I was watching TMS recently, the thought occurred to me - why couldn't a similar program be done for horror?

Maybe I'm biased but I think an hour-long show devoted to horror in film, TV, books, and comics would be a huge hit. Do it in the laid-back, just-guys-talking style of TMS where you have a trio of personalities who all know their stuff riffing on various topics, giving their unvarnished opinions, and bring in guests from all corners of the genre community - everyone from Robert Englund to Guillermo del Toro to Elvira - and you've got a show that I know I'd enjoy, at least.
There's a handful of people from the genre world who would be naturals to host a show like this - everyone from Mick Garris (who's currently hosting the online series of interviews Post-Mortem) to the likes of Joe Lynch, Adam Green, and Eli Roth (Lynch and Green recorded an audio commentary together for Friday the 13th: The Final Chapter and Roth has been interviewed for Bravo's Scariest Movie Moments specials as well as being included in the roster of commentators on Joe Dante's Trailers from Hell site). Then there's personalities from the internet community like Shock Till You Drop's Ryan Turek and Dread Central's Steve "Uncle Creepy" Barton. Fango editor Chris Alexander would probably also be a choice candidate for a program like this.
A horror riff on TMS will likely never come to pass but hey, it's not impossible. Maybe a talent search for the hosts would be the way to go. I just know that somewhere out there, fans like these are waiting for a chance to interview their idols: 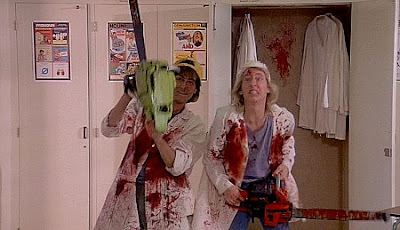 Email ThisBlogThis!Share to TwitterShare to FacebookShare to Pinterest
Labels: That Metal Show

TMS is frustrating because they very rarely discuss real metal bands. They only talk about hair metal, classic rock and nu-metal/metalcore. I fear that a horror show in the same vein would only cover slashers and mainstream flicks that everyone has heard of.

Well, TMS likely focuses on the more familiar types of metal simply because that's where the greater fan interest lies. You look at the T-shirts in the audience and it's all AC/DC, Maiden, Kiss, and so on.

The fans of these bands - and I'm one of them, too - don't get tired of hearing about them. It's the same way with horror - you'd think that fans would've heard enough about Friday the 13th and Halloween to last them ten lifetimes but it ain't so.

That said, I'd like to imagine a horror talk show that would give Jim Van Bebber or James Lorinz as much attention as Kane Hodder or Tom Savini.

Maybe some enterprising folks will make it happen one of these days - you never know!

It would really depend on the hosts. Sure I'd like to hear what Eli Roth or Adam Green talk about horror movies but if they got real fans with decent personalities...I think it could do well.

I think that Horror-themed TV talk show could probably survive on AMC as they seem to champion the genre. My vote would be for Mick Garris if only for the stellar connections he has within the industry. He could get a lot of filmmakers on there but I think that they would have to have a good mix of veterans (Carpenter, Landis, et al) and more recent filmmakers (Larry Fessenden, etc.).

I'm a huge metal fan and I can't stand TMS. Florentine gets on my nerves. Sorry Jeff. I wish Headbangers Ball was better. It started off strong but has since fluttered. But I agree with Dom, they are really limited in scope. I get the appeal to the 'masses' but they are really missing out by not covering more underground stuff. But kudos to Florentine for wearing a Gojira shirt a couple weeks back. I hope he knows who they really are :)

ANYWHOS, I would wholeheartedly support something like this and don't think its too much of stretch. Hell if Elivra can make a comeback (her new show is really weak, BTW), why can't a new and originally programmed show not work as well? Hell, there would be a perfect time slot for it right before the Elivra show. Since she says she only focuses on the 'old stuff' this show could focus on current goings ons. Brilliant!

Hey Cortez, Florentine doesn't bother me but you're far from the first person to say he gets on their nerves. My wife watches TMS with me occasionally and she always says that Florentine annoys her. I guess I just have a high tolerance for abrasive people!

Sorry to hear the new Elvira isn't so hot. I was bummed that it wasn't playing in my area but I guess I'm not missing much. In Peterson's defense, I think it would be tough to make the Elvira act seem fresh at this point.

There are some podcasts along these lines...
One I particularly like is Necronomipod... which only covers books/stories but the guys know their stuff and despite being a bit 'morning zoo' at times they get into some really interesting discussions.

This would make an excellent 'At The Movies' type show for Thriller TV... have one guy be the vaguely pretentious one who prefers the classics and foreign horror films... the other guy is the gorehound with much less exalted standards... watch them battle it out.
I'd watch it for sure!

Sounds like a winner, Knob! As for podcasts, I just can't get into them for some reason. I've tried a couple and they just don't do it for me.