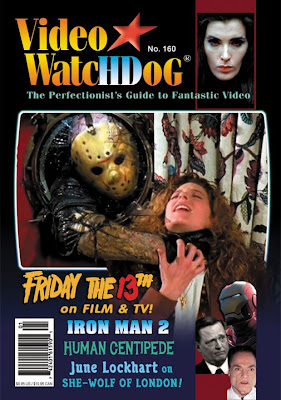 Things have been a little bleak in the Allard household lately as the dilemma of being unemployed (for seven months or so now) brings a grim uncertainty about the future. But...in the midst of a lot of worrying, I'm very happy to say that I'll be published in the next issue of Video Watchdog! In issue #160, due in stores this month, I take a look at the three season run of Friday the 13th: The Series - a show that was dismissed by many genre fans in its day but has always been a personal favorite of mine. The merits of Friday the 13th: The Series will forever remain open to debate but there's no argument that Video Watchdog is the best of the best so to be included in its pages is a great honor.

For the full contents of the issue, click here. 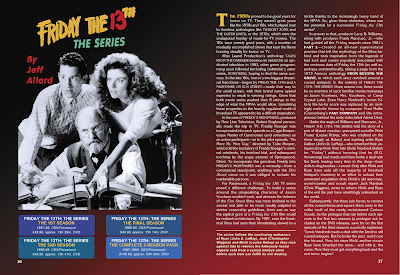 Email ThisBlogThis!Share to TwitterShare to FacebookShare to Pinterest
Labels: Friday the 13th: The Series, Video Watchdog

This looks awesome. I'm a big, big fan of this show as well with the ep. involving the film student bringing a werewolf on film back to life being my fave. I shall have to pick this ish. up!

Please do, J.D. - I hope you'll think I did the show justice!

I have been a BIG fan of that show since day one, way back in '87! I have all three seasons on old VHS and now on DVD! Love it! So cool.

There is a site dedicated to the show, as well, here:

Awesome, Wings - I hope all the show's fans enjoy the article!

I hope this new exposure brings a whole new era of Allardiana and that you will find yourself inundated with job offers and crushed by work. Because, you know, it's feast or famine, it really is.

That's for sure, Arbo. Thanks for the well-wishes - hopefully better times are around the corner because I'm finding that famine is no picnic!

Wow, that's some awesome news, Jeff! You know how I feel about the show, and I think it's great that you were able to write about it for such an esteemed genre publication. Congrats, and I too think, and hope, that this will only further push you to a career that would truly fit you best. Cannot wait to pick up the issue!

Thanks Matt - I'll be eager to hear what you think about the article!

Congrats on getting that gig! I hope it leads to more, well-deserved, appointments.

I never paid any attention to the show during its initial run but your various mentions of it over the years got me to watching it on Thriller and I enjoyed it... a bit moralistic and 'happy' compared to my usual tastes... but taken in context of its time it's good fun.

Yeah, it's a very old-fashioned show in a sense with traditional ideas about good and evil - which makes it all the more ironic and galling that the Moral Majority (successfully) pressured Paramount to cancel the show for being a immoral influence.

Thanks for the congrats, Knob - if you read the article, I hope you enjoy it!

Congrats on making it into my favorite film mag. You deserve it. Hope things pick up on the employment front soon, too.

Congrats Jeff. Ahhh Robie...what ever happened to her?

She was married to a Duke or an Earl or something for several years so she did ok for herself - she was actual royalty!

OMG! Congrats. Video Watchdog is such an incredible magazine that only uses the best writes. How totally awesome!

Good luck with job hunting. My fiance went through this not too long ago. Hang tight!

I will, Amanda - things will turn around eventually, I'm sure. And thanks for the congrats!