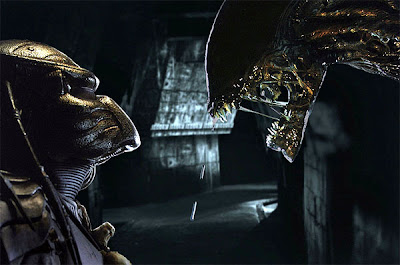 When the hunt-happy Predators tested their skills against the egg-laying, slime-dripping Aliens it turned out to be more dismal monster mush than epic monster mash. The two races had tangled in comic book pages for years to the delight of their mutual fan bases but when they took their battle to the big screen, it didn't work out that well.

With Predators, the Predators apparently wiped their hands of all that screen-sharing Vs. business but while I think splitting from the Aliens was a good move for both franchises, I still like the idea of vs. movies for the Predators. They're hunters so it's natural to want to see them go up against challenging adversaries. Some say that going the vs. route put the Predator and Alien franchises into inherently cheesy territory but I don't think it was the principle of a vs. film that sunk both AVPs, it was that when it comes to the movies the Aliens are better off on their own and the Predators were versusing against the wrong foes (is versusing a verb? If it isn't, it ought to be).

There's a big galaxy out there, full of potential star-spanning enemies for the Predators, but there's only one alien race that I consider to be the Predator's ideal extraterrestrial adversary: 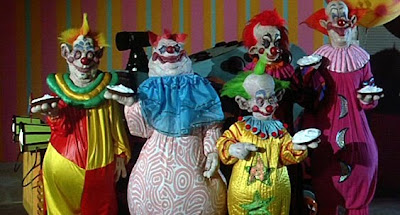 Now, please - don't leave. Just hear me out. The Killer Klowns are perfect to go against the Predators. These are the true arch-enemies that these guys were always meant to have. If the Predators are like Batman (who they faced off against in comics, by the way - check out your LCS's back issue bins!) with their grim, stoic demeanor and calculating methods, then the anarchic Killer Klowns are their Joker - the maddening, madcap Jesters that the Predators can't eliminate. The problem with the Predators facing off with the Aliens is that it's boring from the get-go. They're both dark characters and their means of fighting each other just don't offer a lot of variety (that acid blood? It gets old.). The Predators up against Killer Klowns, though? You'd be hard-put to exhaust the possibilities of that war.

The no-nonsense Predators vs. the prankish Killer Klowns would be a death match for the ages. Guaranteed. Call it KKVP: Blood Circus. Whatever you call it, it would go down as The Greatest Hunt On Earth. Man, I can just see the poster - a Killer Klown dotted with the laser sights of a Predator gun with the tagline "Who's Laughing Now?"

And if 20th Century Fox doesn't jump on getting the rights to Killer Klowns and making KKVP (oh, excuse me - KKVP:3D) the event movie of the millennium, how about a fan-made flick, huh?

Yes. Still love the Predator franchise and always will. There's only so much you can do with the Aliens. They're vermin without any rules or codes. But, they were first, and you have to respect those that come before you.

Oh my God. That's the best idea of all time. How about a Danny Glover cameo? Not as his character from Predator 2, but as Murtaugh from the Lethal Weapon series. There would be so many opportunities for him to say that he's "too old for this shit."

Karl, I totally respect the Alien franchise but I think it's better off sticking to itself - can't wait for Ridley Scott's prequels!

Dom, glad you approve of my bold idea and I love your suggestion of getting Danny Glover on board - that's perfect!

Write it up -- if no one jumps on it as a movie, it would make one hell of a graphic novel!

Wow. That is really a great concept and I would so pay to see this. The Predator series has already become a bit tongue in cheek. I do want to see Killer Klown skulls in the Predator trophy room. Who wouldn't want to see this?