The Trickster's House of Style 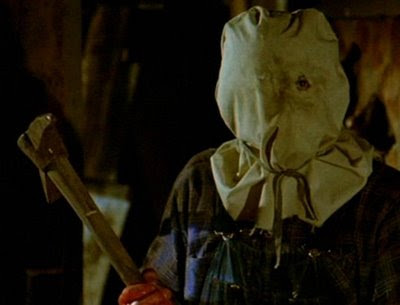 Finding the right look for a horror icon is not an exact science. I mean, look at Jason. The burlap sack he rocked in Friday the 13th Part 2 (1981) had its charms but it wasn't until he donned a hockey mask midway through Friday the 13th 3D (1982) that the character took off into the horror stratosphere. Who could've guessed that'd happen? There's just no telling what an audience will connect with.

For instance, I'm sure that during the making of A Nightmare on Elm Street (1984) more than a few people must've questioned the wisdom of putting a dream-stalking boogeyman in a red and green striped sweater but look how well that paid off. 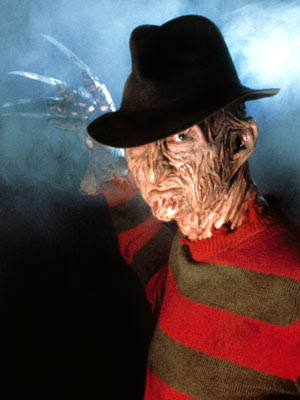 Successfully designing a horror villain seems to be as attributable to happy accidents as much to deliberate artistic design. The classic example of which would be Michael Myers.

Would Halloween (1978) have become the classic that it is had Tommy Lee Wallace not included the unlikely option of a Captain Kirk mask among the choices he presented to John Carpenter in determining what disguise their villain should wear on his rampage through Haddonfield? Probably not. Sometimes fate just intervenes and provides the right inspiration at the right time.

And, sometimes it doesn't... 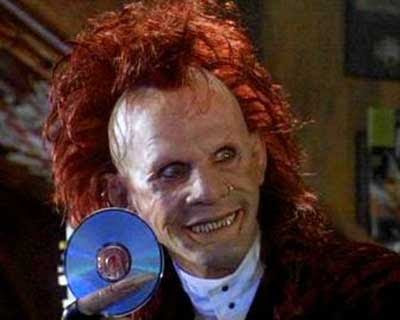 The Trickster (played by stage actor T. Ryder Smith), star of 1994's Brainscan, is far from the only would-be franchise player that failed to win the hearts of horror fans. But he remains the one that looked the most ridiculous. From head to toe The Trickster is a catastrophe.

I mean, Dr. Giggles never made it to a Part 2 (a crime, in my opinion) but you can't fault the way Larry Drake looked as the mad medico in that movie. Similarly, Clint Howard really did look like an Ice Cream Man in, uh, The Ice Cream Man (1995). The Trickster on the other hand, well...where to begin?
To be fair, coming to a consensus on how a demonic jester spawned from a CD-ROM ought to look couldn't have been easy. I mean, just looking at the results tells you that much. But man, we have both a mohawk and a mullet going on. I'm no expert about hair but is that what they call a pompadour? Look, all I know is that when designing your hopeful horror star to be, it's a bad idea to model him after '80s pop singer Howard Jones. 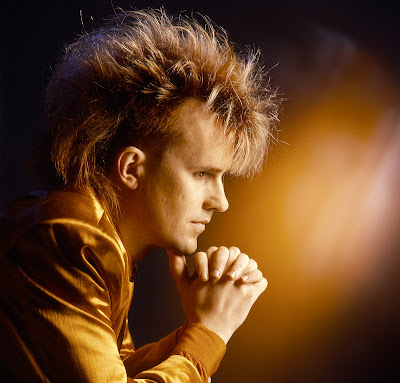 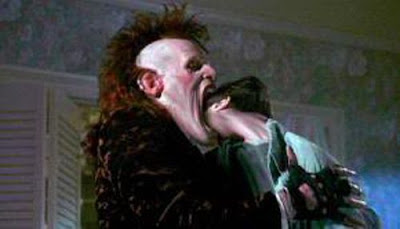 Seriously, you don't want your movie's embodiment of evil to look like he should be jamming on a synthesizer. An even worse move was giving him an '80s "rock" wardrobe (complete with leather pants) to match the big hair. 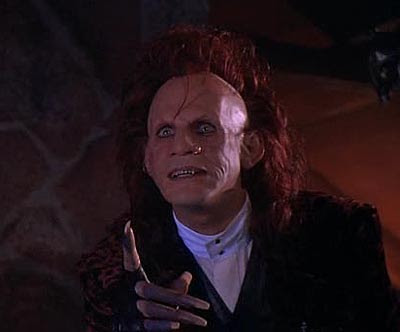 And in a post-Hellraiser world, what was a nose-ring supposed to do for The Trickster's look? Dee Snider looked laughable in Strangeland (1998) but at least you could say he was really in the game. 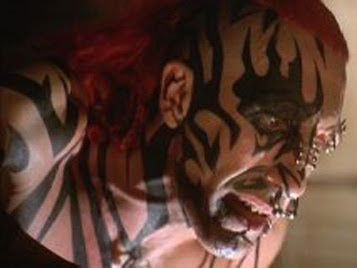 Director John Flynn was responsible for some great movies, like the legendary action fave Rolling Thunder (1977), the James Woods thriller Best Seller (1988), and one of Steven Seagal's best, Out For Justice (1991) and Brainscan's script was by Andrew Kevin Walker - who proved he knew how to write the hell out of a horror movie with Seven (1995) but things just didn't come together for these guys on Brainscan.

A movie about cutting edge technology should've had a villain with a cutting edge look. Instead, The Trickster was a evil genie that took his cues from an earlier decade's most unfortunate fashions. After sixteen years, everything else about Brainscan is long since dated (in some ways, endearingly so) but its villain's look was already dated the day they bought his clothes.

And unlike Jason, The Trickster never got a sequel to retool his look.

LOL! I love Brainscan. It's so 90's. Watching it as a teenager, I could relate to the main character. It's a fun, harmless b-movie. The Trickster is...well, he's The Trickster.

As for movies that tried to start a smash franchise in the same vein as Elm Street, I'm quite fond of Wishmaster. I hope to review it this month, if not early next year. Andrew Divoff is too cool for school.

I love Wishmaster! I actually saw it in the theaters back in the day and thought it was a kick to see a movie featuring Robert Englund, Kane Hodder, Tony Todd, and Reggie Bannister - with an opening voiceover by Angus Scrimm to boot. And, like you say, Andrew Divoff is cool as hell. You should definitely give Wishmaster the review it deserves, Dom! Maybe I'll get on that one myself one of these days.

I watched Brainscan on cable about half-a-lifetime ago. I don't remember much of it other than it wasn't very good. Most movies about new technology aren't very good.

There's another movie called Brainscan from the 80s that stars Bills Paxton and Pullman. As someone who got those two confused for a long time, I find that combination head explosion-worthy.

I love Brainscan and still own it on VHS! I completely agree that The Trickster is incredibly whack looking, and he was even when the film came out, but I still loved it. Probably because I was still somewhat young enough to relate to Furlong's horror-centric character.

Sarah, I only wish that Dr. Giggles had spawned a sequel but sadly it didn't happen.

As for the Paxton/Pullman movie, that's actually Brain Dead - I remember that from way back in the day. I remember liking it but don't hold me to that.

And I'm with you all the way on MBV. It was set-up so perfectly for a sequel - and so was the remake! Why MBV can never catch a break, I don't know.

Matt, I may deride Brainscan for being ridiculous but I still have a soft spot for it. I still have my VHS copy too and watch it often.

Thank you for an amusing writeup- truly there's no predicting which boogeymen will fade into obscurity and which will be immortalized in children's toys and novelty albums.

When I watched this a few months ago, my girlfriend immediately labeled the Trickster's tresses as a 'mowhawk-skullet,' which certainly sounds formal enough to me. I took up the lofty task of defending this film

but as I'm sure you'd agree, it's something of an uphill battle.

And may I second, or third, rather, the shared disappointment in living in a world which is devoid of DR. GIGGLES sequels!

No "tech-y" flick has ever really been of interest to anyone. A lot of them have come down the pipe, but the only films to succeed (2001, Terminator, 1st Matrix) held the shiny stuff up and said: "See this, cool, right?" and then zip, immediately out the window. I've got big hopes for Tron: Legacy. Not that it'll be all tech-y but that it will have the arm to fling that shit once it gets where it's going.

Sean, I do agree it's an uphill battle to defend Brainscan. I enjoy revisiting the movie for its '90s nostalgia factor but it's hard to say much that's actually positive about it beyond that.

Bill, I've got my fingers crossed for Tron. I'll be pretty bummed if it's lousy.

(to the writer) Something I don't think you're realizing is that all the events taking place in the movie are a figment of the boy's imagination. So, the entire look of Trickster is generated by the boy's subconscious. He likes rock music, as it shows in the film, so it would only make sense that Trickster looks somewhat 'heavy metal-ish'. It's the quintessential 90's (suburban white) kid horror movie. I knew a lot of guys (growing up) that had that kid's mentality.

P.S. Someone on imdb.com named LarsonWolf posted that the kid's house (in the movie) belonged to his grandparents and said this: "I'm pretty sure it was filmed on Ch Lakeshore in Beaconsfield Montreal. It's right off Rue Lakeshore on Thompson Point. Don't have the exact address. Still have the tennis court in the center of the neighborhood. Would love to have that house. Beautiful location!!"