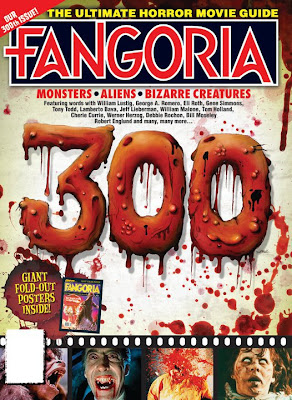 I started buying Fangoria with #22, an issue which featured Halloween III: Season of the Witch on the cover. That was a long frigging time ago so holding Fango #300 (!) in my hands is a sharp reminder of how much time - and how much horror history - has gone by since I picked up my first issue of the World's Greatest Horror Mag at a now long-defunct book store in Springfield, Massachusetts.

Those early years, when the ship was being steered by "Uncle" Bob Martin and David Everitt, were the magazine's fondly-remembered formative years. Horror was changing in the splatter age and Fango was right there on the cusp of it. When both Martin and Everitt left the mag prior to its 50th issue, it was a genuine shock to readers.

Thanks to those behind-the-scenes shake-ups, little could be done to make that first publishing milestone a special occasion but succeeding Fango Editor Tony Timpone went on to make sure that Fango's anniversaries would be duly celebrated with jam-packed issues.

Now, Fango is celebrating its 300th issue in the aftermath of yet another editorial change. After a lengthy run, Tony Timpone moved up the ladder to other responsibilities in the Fango organization, leaving Chris Alexander to step in - as of issue #293 - as Fango's first new Editor-in-Chief in over two decades. That means the responsibility of assembling a 300th issue extravaganza fell into Fango's new editor's lap with barely any prep time. The change may not have been quite as last-minute as those changes surrounding issue #50 but seven issues is still a very short time to pull together an anniversary issue that could meet the high bar set by the mag's previous landmarks.

Alexander's solution was to honor 300 essential horror films, with brief commentaries from a mix of filmmakers, actors, and genre commentators - topped off with a pull-out poster reproducing the classic Godzilla cover to Fango issue #1. What Timpone might have done had he stayed in place for the anniversary, we'll never know (he does contribute an editorial and several of the issue's capsule reviews) but judging by past examples, I imagine it would've been very different than Alexander's approach. And also, had Alexander had more time at his new post leading up to this issue, I expect that we'd be looking a very different celebratory ish as well.

As is, Fango #300 is a fun read, oozing with a love of the genre, but it inescapably suffers in comparison to the anniversary issues of the past. Given the situation, I think it's a miracle that Alexander was able to put together as elaborate an issue as he did but it's still, unfortunately, the least of the centennial Fangos.

Fango's anniversary issues - including the 25th and 30th anniversary issues - have always been used to take measure of where the genre has been, where it's at, and where it's going. As such, they were Who's Whos of authoritative genre voices, bringing together the best, brightest, and most knowledgeable genre critics. Previous Fango anniversary issues have been graced by the seasoned skills of Maitland McDonagh, Tim Lucas, Tom Weaver, Bill Warren, Kim Newman, Douglas E. Winter, Stephen Bissette, David J. Schow, Peter M. Bracke, Ramsey Campbell, Chas. Balun (R.I.P.), David J. Skal, and Joe Kane (aka The Phantom of the Movies). That none of those venerated scribes - nor many of the magazine's most notable past contributors like Carnell, Ryan Turek, or Kier-La Janisse - are found in the pages of Fango #300 feels like there's just too many people missing to call it a proper party. Even longtime Literary Associate Linda Marotta sits this issue out (but at least Philip Nutman is still around!).

Fango is in a transitional time and this issue is proof of that. I think Alexander made a Herculean effort, given the time and resources available, to pull out the stops for #300. Issues like this don't come together overnight and it's a better anniversary issue than it probably has any right to be. Alexander and managing editor Michael Gingold contribute the lion's share of the reviews and it's enjoyably batty to see Uwe Boll offer his opinion on The Shining, Vincent D'Onofrio (!) give a shout-out to High Tension (2003), and to see Gene Simmons and Lamberto Bava share a byline (!!) on the issue's back page. And it's also welcome to see underappreciated films like Parents (1989), The Last Wave (1977), and The Burrowers (2009) get some notice.

It's a bummer that the first issue of Alexander's editorial reign to date that I haven't been 100% keen on is this anniversary issue but that doesn't dampen my enthusiasm at all for where Alexander has been taking the mag and where it's heading. His arrival in the editor's chair has been a great shot in the arm to Fango and I have no doubt that some of its best days are ahead. To have an anniversary issue so early on in his editorial run is a monster of a hill to climb and given the circumstances, I think Alexander was wise to spotlight something that every horror fan can come together on - classic movies. Although I dearly wish that a place could've been found among this issue's 300 films for The Ghost and Mr. Chicken (1966). 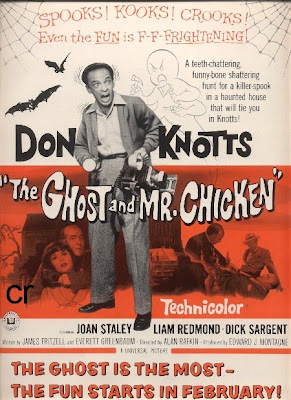 Cheers to Fango at 300! May it continue to be the biggest name in horror journalism for another hundred issues and beyond!
Posted by Jeff Allard at 8:04 AM

Looking forward to picking this one up. Love the cover.Now that's a logo. I've become a bigger Rue Morgue fan these days as Fango flounders to find the right shore. While I'm sorry to hear this issue isn't the best it could be, I'm sure I'll still find it refreshing. Even without Don Knotts. Though that would have been fun.

I used to subscribe to Fango. I had no idea that Chris Alexander was the new big cheese. I might have to buy this issue. Honestly, I prefer Rue Morgue, but Fango is always fun.

Zombo, I don't want to sell this issue short as, all nitpicking on my part aside, it's still very solid. With reviews of 300 horror movies, you'll definitely get your money's worth out of it! It's a different type of anniversary issue than the ones presided over by Tony Timpone but it's a piece of horror history that's got much to recommend it. Fango has been making great strides lately under C.A.'s stewardship so definitely give the mag a look.

Dom, Rue Morgue is one of the most goregeously designed mags on the stands but there's always been an undercurrent of elitism to their coverage that rubs me the wrong way. To my mind, Fango is more even-handed and inclusive in celebrating the mainstream, the independant, and the esoteric alike. But I hope both mags will continue to thrive for many years to come.

Hey Jeff - as usual, solid writing and sharp observations. Cheers.
My only beef is with this:


"...have always been used to take measure of where the genre has been, where it's at, and where it's going."

That's what I want EVERY issue of FANGO to do on a regular day...so with 300 I wanted something a bit more offbeat and timeless...something with no comparison to anything else.

It was a bitch to get it done but we did it. Glad to know you had fun with it!

Jason, thanks for the comment - I have no doubt that this ish was an especially big undertaking so congrats on putting it all together!

I respect the decision to go a different route than the anniversary issues of the past. I think the traditionalist in me is just missing some of the staples I've come to expect when Fango celebrates another milestone. Still, I have to say this issue's massive selection of reviews has got me going into my movie collection to revisit some old favorites!