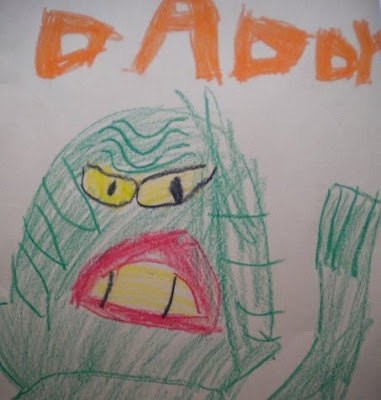 Every parent thinks their child is a potential prodigy and I'm no exception. While some kids are sports stars in training or budding musicians, my five-year-old son Owen loves to draw. Even better, he's latched onto his father's love of the weird, the geeky, and the macabre.

His artwork recently caught the eye of my pal Unkle Lancifer of Kinder-Trauma and Unk has been kind enough to put a spotlight on Owen's drawings. Click over to Kindertrauma for a mini-gallery of Owen's handiwork, including his renditions of the posters for such above his age range fare * as Tobe Hooper's The Funhouse (1981) and Man's Best Friend (1993) as well as the slightly-less-scary likes of Mark Hamill as Flash nemesis The Trickster!

My thanks to Unk - I hope everybody enjoys the pics! Here's a couple more of my faves: 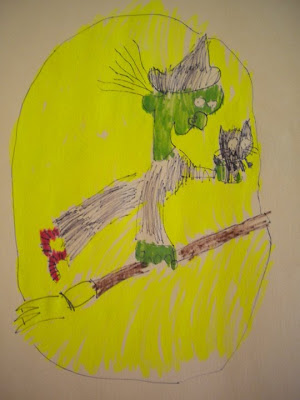 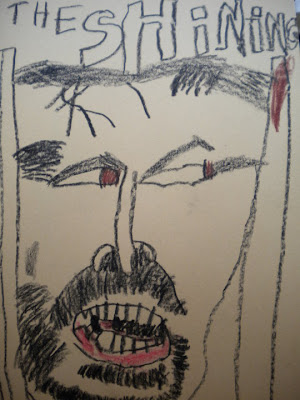 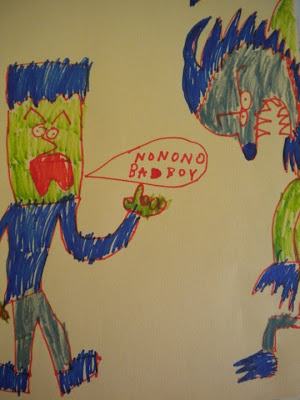 * For the benefit of anyone who might be concerned, I should add that Owen doesn't watch R-rated movies yet (well, except for Army of Darkness), he just loves looking at the DVD covers!
Posted by Jeff Allard at 8:17 AM

This post totally made my morning. Can't wait til your son ACTUALLY watches the films and has a whole new eye!

Actually, Owen HAS watched Killer Klowns! I forgot that was an R-rated film as well! He totally loved it, by the way.

It'll be interesting to see what he thinks of movies like The Shining when he gets older and discovers that they aren't quite the same movies that have been described to him - no heartfelt apology to Wendy and Danny from Jack for acting crazy and the piranhas in Piranha 3-D do a lot more than bite people's ankles!

Aw, but the piranhas are *kind* of cute still!

You know, I think Killer Klowns is actually PG (made pre-PG13 rating). I remember discovering this myself when I was around 8 and being absolutely SHOCKED. It makes sense though, since there's no nudity, f-words, or 'realistic' violence. I'd have to double check, but I'd bet a snowcone it was considered age-appropriate.

Yep, in checking it out I see that it was PG-13! Still technically too old for Owen but I can think of G-rated films that have more traumatic imagery than Killer Klowns!

My son's ten, and he has the same affinity for Army of Darkness, and Zombie Land as well. He can quote entire sections from Zombie Land, which is REALLY scary.

Sounds like your son's on the right track, Bill!