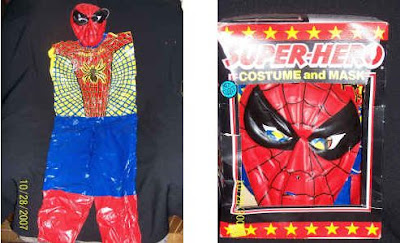 The above pic is of the first Halloween costume I ever wore - well, not the exact costume itself but the same model, as issued by famed costume supplier Ben Cooper, Inc. - so I think I know a little something about how to dress like a proper Marvel superhero (looking back at this costume for the first time in decades, I'm guessing that the puzzling addition of yellow to a Spidey suit was strictly a safety consideration for young trick or treaters). That means the release today of pics from both the upcoming Spider-Man reboot and the Captain America film has got me ready to give my expert opinion. 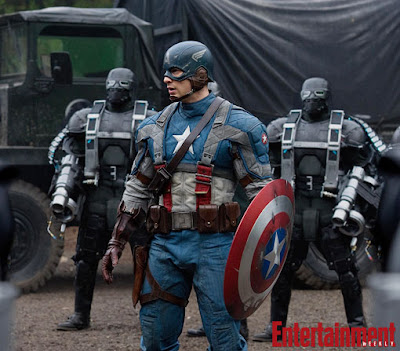 Cap is a tricky character to get right (just see the Albert Pyun-directed 1990 film for evidence of that) but everything I've seen about this movie makes me think that Joe Johnston and co. have nailed it. I think the costume as seen in this pic is note-perfect. It closely follows artist Bryan Hitch's redesign of the Cap uniform as seen in the Ultimate Universe with just a few tweaks. By incorporating a more military feel to the traditional Cap costume, Hitch was able to shed some of the inherent goofiness of Cap's look while still honoring its iconic essentials. It doesn't surprise me that the makers of Captain America have decided to follow that direction in the film and it also doesn't surprise me how perfectly that look translates to live-action. If I had to grade this, just look to the 'A' on Cap's helmet. 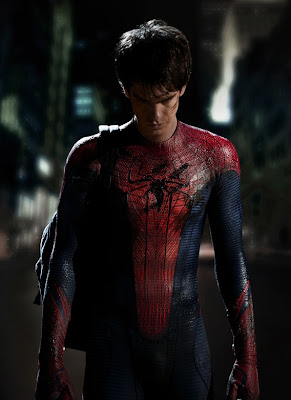 Eeerrr...this is the first look of Andrew Garfield as Spidey and I've got mixed feelings about it. Based on this stand alone pic, I think Garfield is definitely the right guy for the part on a physical level. He's got the right gangly look and I like that director Marc Webb hasn't tried to bulk him up they way Raimi did with Tobey Maguire.

But the costume...if this is really the final costume and not just the early version that Peter wears during his short-lived stint as a wrestler, let's just say that it's going to take some getting used to. Say what you will about the Raimi films, one thing they should be applauded for is getting the classic Spidey costume on screen. You'd think that would be a no-brainer, as the original red and blue Spidey suit (designed by Jack Kirby, not early Spidey artist Steve Ditko) is so classic that it seems dumb to tamper with it. Clearly, though, others feel differently.

With the Raimi films already proving the case for Spidey's classic duds, obviously what you want to do for your semi-controversial reboot is goof around with the costume for no apparent reason. I don't want to complain too much without knowing whether this is really the main outfit that Garfield is wearing but it's got some serious lameness going on. I don't think Flash Thompson would be such a big Spidey booster if ol' Web-Head wore an outfit like this in the comics. On the upside, at least it's not the CG shit that Warners and Martin Campbell have stupidly saddled Green Lantern with. And also, it's still red and blue so thumbs-up for that. On the downside, what is up with the fucked-up Spider emblem? It looks more like a Rorschach blot than a spider. And why does the web design on the chest just kind of dribble-drabble away as it travels down to his torso? It's Spider-Man so why be half-hearted about sporting the webs? And what's going on with the gloves? Not too crazy about what I see there, no sir.

As some have pointed out, there's a hint that Garfield may be wearing mechanical web-shooters as you can glimpse something metallic on his wrists. If that's the case, I'm jazzed. I didn't hate the organic shooters at all but as a fan, I'd be pumped to see them go old-school and bring the classic mechanical shooters to the big screen.

All nit-picking aside, I'm still on board with the new Spidey flick. If that's the final costume we're seeing (sans mask), I can live with it if everything else is up to par. I might even come to love it if the movie around it is good enough. But looking at the two pics that have come out today and comparing how immediately classic Cap looks to the "eh, I guess it's ok" way that Spidey looks, it does make me wish that all of Marvel's properties would revert back to their control.

And yes, when they get around to making a Dr. Strange movie, I do want him to look like this: 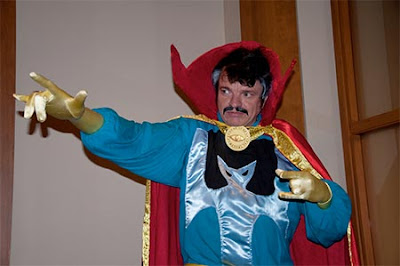