Get Down With The Sickness 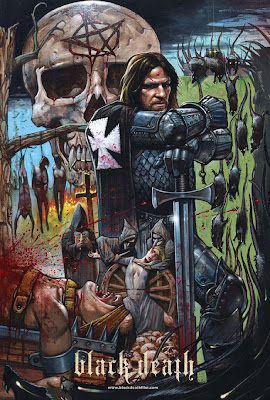 Over the years, I've ridden through some pretty desolate times for the genre so it'll take more than the likes of Season of the Witch, The Rite, and The Roommate to put a dent in my faith in horror. That said, I'm glad to report that the first horror movie of 2011 to be worth a damn has arrived in the form of Christopher Smith's Black Death. Taking place in the plague-ravaged Britain of 1348, Black Death is a grim, period-set tale that effectively hearkens back to the likes of Mark of the Devil (1970) and Witchfinder General (1968).

Historical horror films were a staple of the genre when I was growing up. I loved the grotty, gnarly feel to films like Blood on Satan's Claw (1971) and felt it was a shame when those movies fell out of fashion. Black Death won't inspire a flood of imitators but as a flashback to a style of film that doesn't exist anymore, it's very satisfying. Except for some bursts of hyperactive editing in the fight scenes, you could slap an AIP logo on Black Death and pass it off as a film made in the late '60s/early '70s.

I don't think it's an instant classic (although I do suspect that it will hold up well to repeat viewings) but it's very good and "very good" is worth a lot these days. I highly recommend giving Black Death a look on VOD.

To give my full review a read, click over to Shock Till You Drop.

Did you really just quote a lyric from a terrible nu metal band in your headline? :)

I just caught this one too and really enjoyed it. Loved the questioning of religion (but no real commentary or beating you over the head message) with also a nod to the supernatural. I also enjoyed the surprise turn it took at the end. Smith's movies (like Triangle) are known for that.

Yeah, it's definitely a nice piece of work. It's so atmospheric, I would've loved to have seen it in a theater.

And to answer your question - yes, I did quote a lyric from a cheesy nu metal band. In my defense, it's really hard to come up with an appropriately quippy title to go along with the bubonic plague.

Oooh! This looks like it's right up my dark, rat-infested alley.
I've been watching my way through a bunch of that older period stuff lately... Vampire Circus, Torture Chamber of Dr. Sadism, The Conqueror Worm.
I gave the Solomon Kane movie a miss because it stunk of suck... but this looks pretty cool.

Looks good. Figures it's being released by Magnet/Magnolia. They are consistently my favorite company when it comes to releasing interesting, moderately budgeted genre films.

Knob, I read a few reviews claiming Solomon Kane was good so who knows - maybe it's worth a shot. I definitely can vouch for Black Death, though!

Bob, I agree - Magnet has an eye for quality. Hope you get a chance to check this one out!