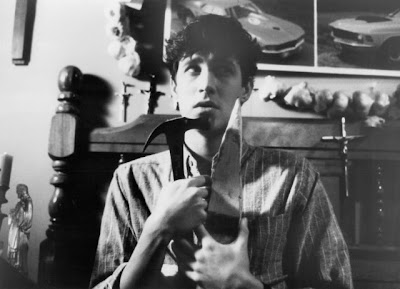 Is Fright Night (1985) considered to be a true classic or is it just a really good movie? I'm leaning more towards the latter myself but that doesn't mean I don't think the upcoming remake has a lot to live up to. Let's face it - the new version is unlikely to have performances as memorable as those of Roddy McDowell, Chris Sarandon and Stephen Geoffreys or FX as dazzling as the ones devised by Richard Edlund, Steve Johnson and co. (Fright Night remains an '80s FX showcase just as impressive as the more celebrated likes of The Howling). Still, I do believe there's room for improvement - especially in regards to its main character, not-so-fearless vampire hunter Charley Brewster (William Ragsdale).

The original's premise is - on the surface, at least - like a love letter to horror fans. Charley Brewster is a high school student and horror buff who discovers that his new next door neighbor, Jerry Dandridge (Sarandon), is a vampire. When the cops, his friends, and his family don't believe him, he turns to horror host Peter Vincent (McDowell) in the hopes that the actor's years spent killing vampires on screen will help save the day. Once a Peter Cushing/Vincent Price type horror star (hence the name that Holland not-so-subtly chose), the elderly actor hosts a faltering late night horror movie showcase called Fright Night.

How the title of Fright Night relates to the new version is unknown as, for obvious reasons, there's no horror host this time around (who even knows what a horror host is anymore?). Instead, Peter Vincent is now a Las Vegas magician (David Tennant).

When I originally saw Fright Night I thought its combo of Hammer-style horror with state-of-the-art '80s FX was great. However, there was one thing that always bugged me - Charley Brewster's quest to enlist Peter Vincent's help. Why the hell would Charley ask the actor who played his favorite vampire hunter to help him kill a vampire in real life? A very young kid might confuse an actor with the parts that they play - like, a kid younger than seven years old. But a teenager? No, I just never bought why Charley would go to Peter.

If Charley had been portrayed as already being friends with Peter because Charley was a fan and Peter's ego enjoyed the adulation and later on Charley must convince Peter that he thinks his neighbor is a vampire - not because he thinks that Peter has any experience killing vampires but because he's his friend and he needs someone to believe him - that would have been better. But for Charley to approach Peter out of the blue and plead with him to kill a vampire is absurd. I know it's supposed to be absurd in the sense that everyone is supposed to think that Charley is losing it but it's just too much. He comes off as being more challenged than crazy.

Luckily, it looks like the new film has none of that to worry about - just as long as Anton Yelchin as the new Charley isn't so confused that he thinks that David Tennant's character is a real warlock and not a stage magician.

Charley is supposed to be a stand-in for all the horror fans out there but I'd rather not be represented by someone so dense, thanks. It's just not flattering. And is Charley even really one of us? At one point he has to turn to his pal Evil Ed (Geoffreys) for tips on how to defend himself against a vampire. What kind of half-ass horror fan would need to do that? After all, Salem's Lot's Mark Petrie didn't have to ask anyone what to do when real vampires showed up in his town. It was just Game On.
Posted by Jeff Allard at 2:40 PM

I never saw Fright Night until this past Halloween, I wondered the exact same thing about Charley seeking out Peter Vincent. I'm also undecided as to if it is a classic or not. I want to say no, but at the same time, I feel like Peter Vincent is a really memorable character, I love the theme to the movie (not the cheesy J. Geils one, the one playing when we see Jerry's first victim), and the effects are awesome, which all make me want to say 'classic.'

I wouldn't argue too hard against Fright Night's classic status. My only issue with it is Charley's rationale for approaching Peter Vincent (well, that and his poor credentials as a horror fan). If Charley were a little kid, you could buy him seeking out Peter's help but not if he's a full-blown teenager. That said, the Peter Vincent character is so great and the idea of a horror star having to step up for real is so cool that it's easy to make allowances for the fact that the story mechanics it takes to get Peter involved are so slip-shod. I just think there was a better way to get to the same destination.

I think it all would have worked a bit better if Charley had been about 10yrs old... of course, then he would have had less autonomy and wouldn't have a cute girlfriend to rescue.

Yeah, the girlfriend would've had to go but if Charley were 9 or 10 years old, the idea of him going to Peter Vincent to get his help killing a vampire would've been a lot easier to buy and a lot more charming.